The Dirty Thirties & The Flying Forties

The Dirty Thirties were quite a decade for the Cubs.  Although they weren't able to actually win one, they did make 3 World Series appearances in that ten-year span.  I think Cubs nation would collectively cut off their arms if it meant that the Boys in Blue could have that sort of success again (ok - maybe I'm exaggerating, maybe).

Meanwhile, outside of the club's last World Series appearance in 1945, the Flying Forties were the beginning of the Cubs' long tailspin into ineptitude.  But a single World Series in that decade is still more than most Cubs fans have seen in their entire lives.

So, when the opportunity came up for me to purchase a couple of reprint sets from these better times at my LCS, I jumped at the chance.  The shop owner made me a great offer, and let me have the 1934 Goudey and the 1941 Play Ball sets in a package deal with the 1911 Turkey Red reprints that I showcased last week.

Between the two of these sets, I came away with several new players for my Cubs All-Time Roster Collection, including a name that I've been chasing like Moby Dick for a long while now: 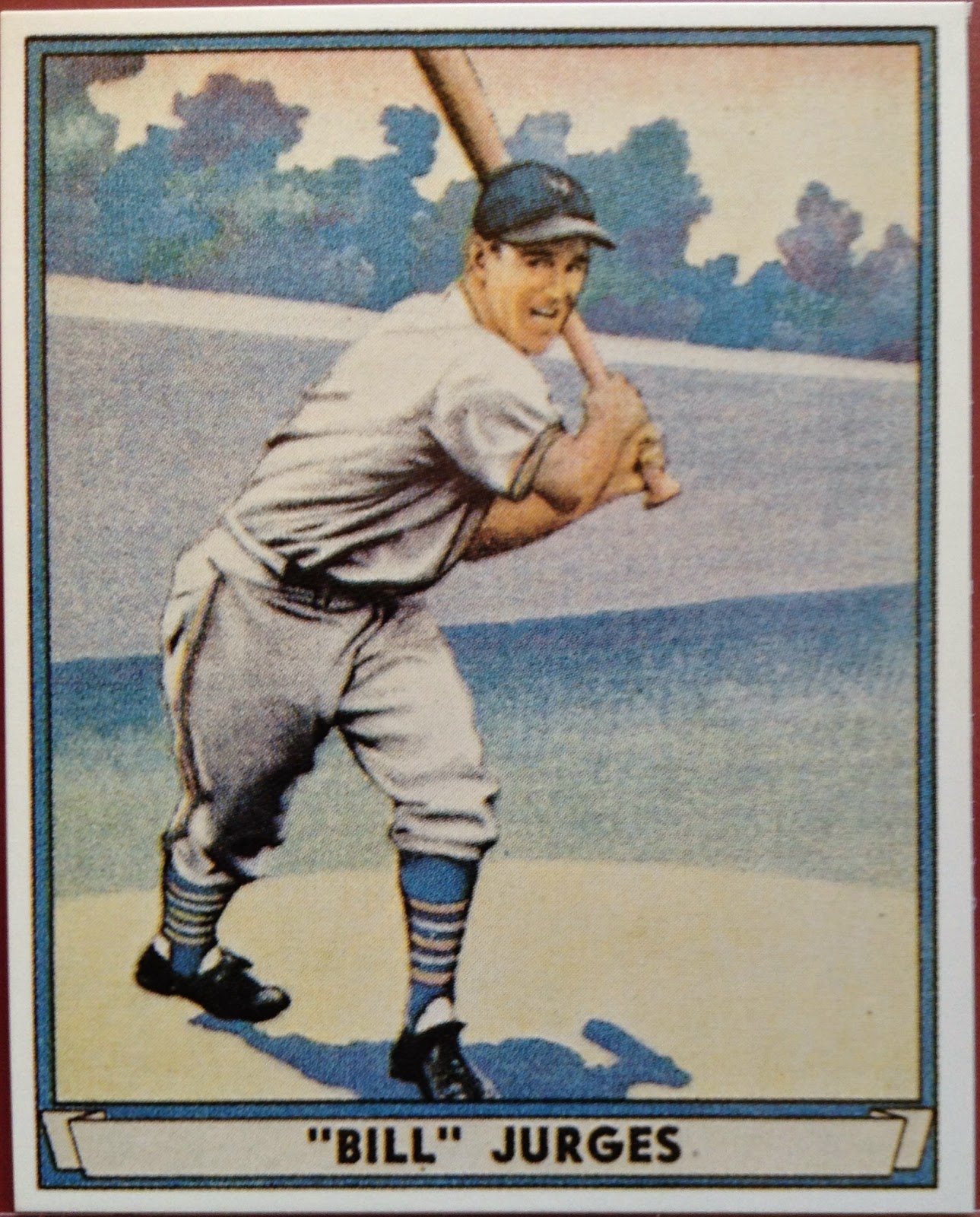 Easily the biggest name in Cubs history that had not yet been added to my collection.  Well, thankfully I have now rectified that great injustice (totally not being melodramatic).  Jurges was the Cubs' star shortstop during most of the 30's, before being traded away for peanuts to the Giants after their World Series loss in '38.

He made a couple of brief cameos with the Cubs at the end of his career in '46 and '47, before finally calling it a day.  All told, as a Cub he batted .254 over the course of 10 seasons and made an All-Star appearance in '37.

But, it isn't really his on-field achievements that most remember Jurges for.  Rather, in 1932, Billy became the unfortunate inspiration for Roy Hobbs when he was shot in a hotel by a crazed showgirl ex-girlfriend.  All told, his injuries weren't too serious and he didn't even press charges, but his story definitely provided a model for the New York Knights right fielder.

Unfortunately, this was the only new name I pulled from the 1941 Play Ball reprint set.  Also, I'm not really sure when the set dates from.  It's definitely not the 2003 Upper Deck grouping, as the card stock is almost paper-thin and lacks any identifying information .  My best guess is that it was done in 1977 by a company called Dover, but I have nothing conclusive. 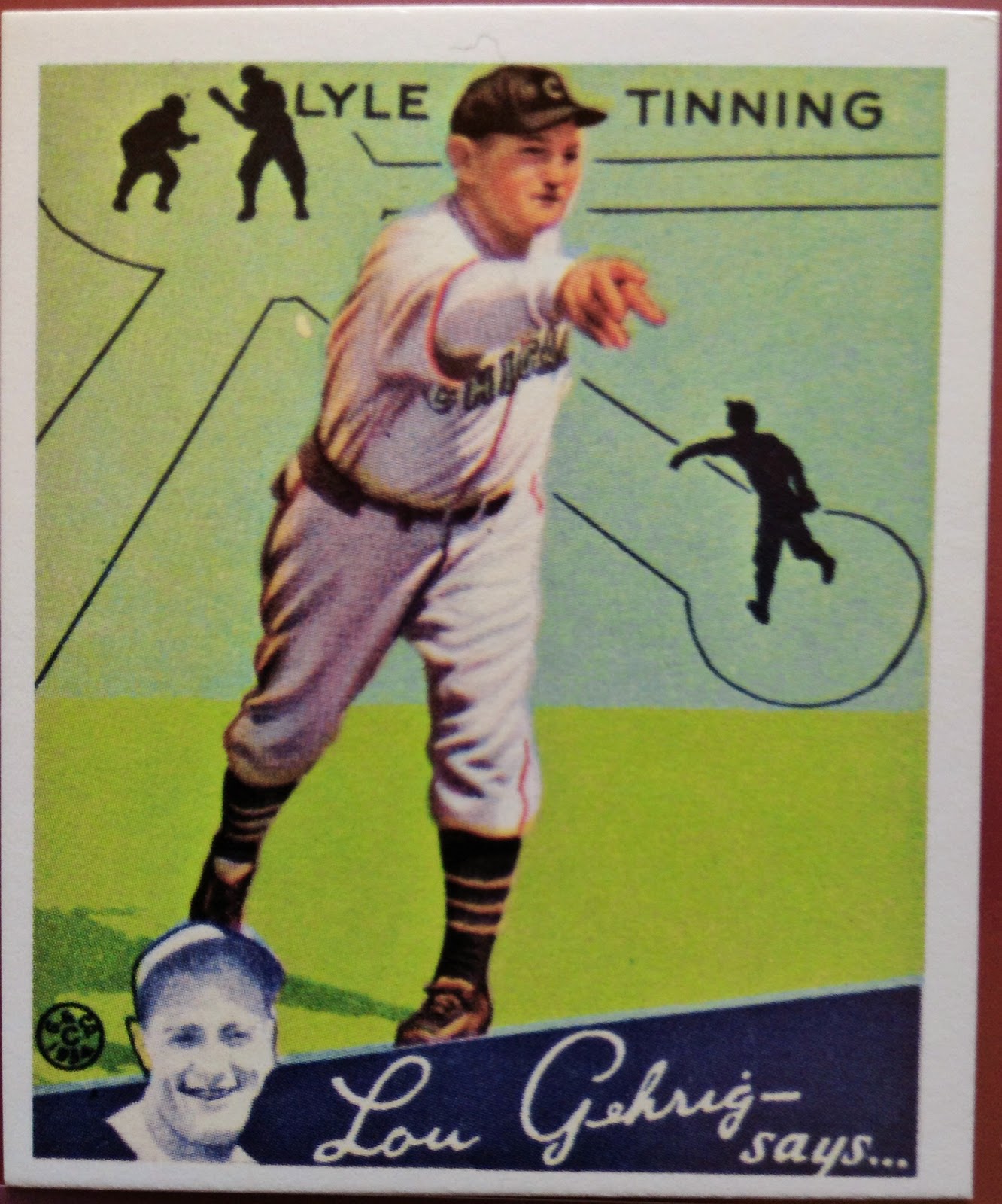 These were the only two new additions who came listed and pictured a Cubs, so let's start with them.

Lyle "Bud" Tinning was the Mark Prior of his day.  He posted one of the best minor league seasons in history when he went 24-2 with a 3.14 ERA in the Western League in 1931 and he arrived to the Cubs with much fan fare the very next season.

He debuted as a swingman, going 5-3 with a 2.80 ERA in his rookie season and was unscored upon during his two World Series appearances.  Things got even better in '33 when he was added to the rotation and went 13-6 with a 3.18 ERA.

But, after being traded to the Cardinals in 1935, Tinning injured his arm and that was it.  He only made 4 appearances that season and his MLB career was already over.  Maybe if Tommy John surgery had been around at the time he'd have blossomed, but we'll never know. 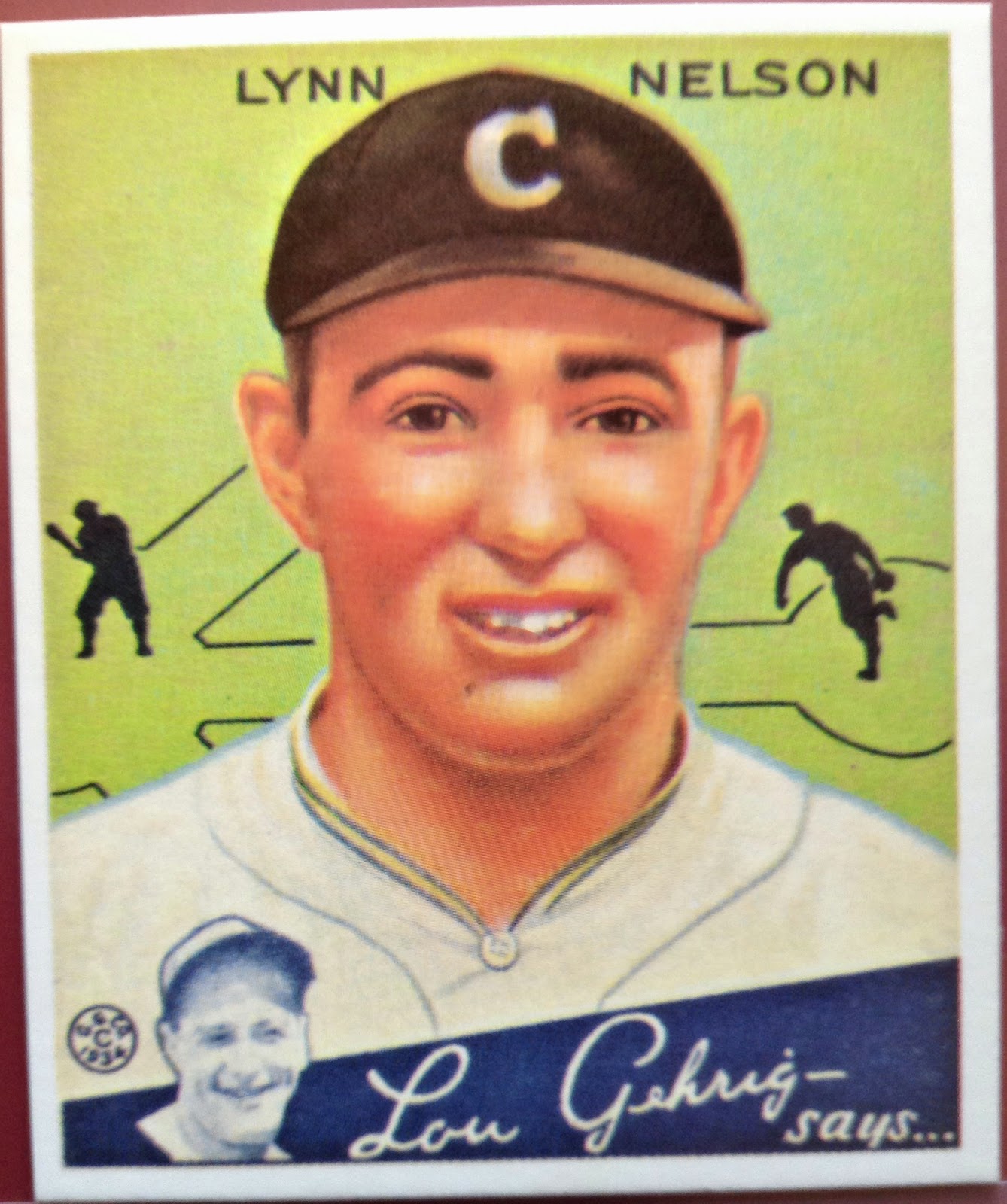 Lynn Nelson was much less interesting.  The pitcher rode the shuttle bus between the minors and the majors, much like Chris Rusin.  He wasn't particularly good, but he wasn't particularly bad either; as a Cub, he went 8-8 with a 4.39 ERA in 158 innings from 1930-34 before seeing time with the Athletics and the Tigers.  Nelson was the definition of mediocrity. 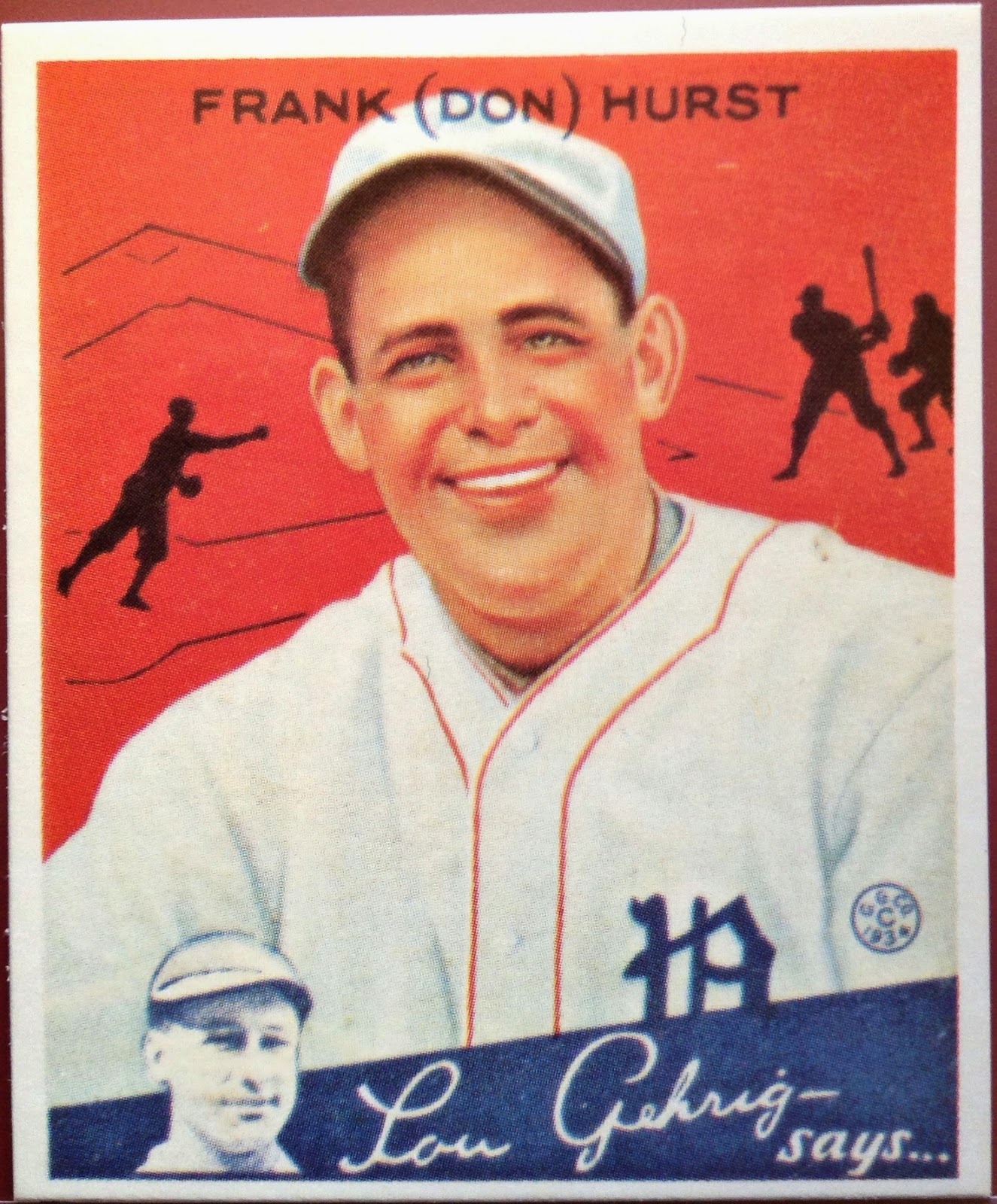 Don Hurst fit the mold of many typical Cubs acquisitions:  a washed up, former star who the Cubs tried to squeeze dry.  Jim Hendry wasn't the only one bringing these sort of players to the north side!

The Cubs had a young first baseman who had yet to fulfill on his promise by the name of Dolph Camilli.  So, they arranged a change of scenery trade with Philadelphia that June.  While Dolph went on to become one of the best sluggers in baseball, Hurst batted .199 in 51 games and was never seen in the bigs again.  Oopsy daisy. 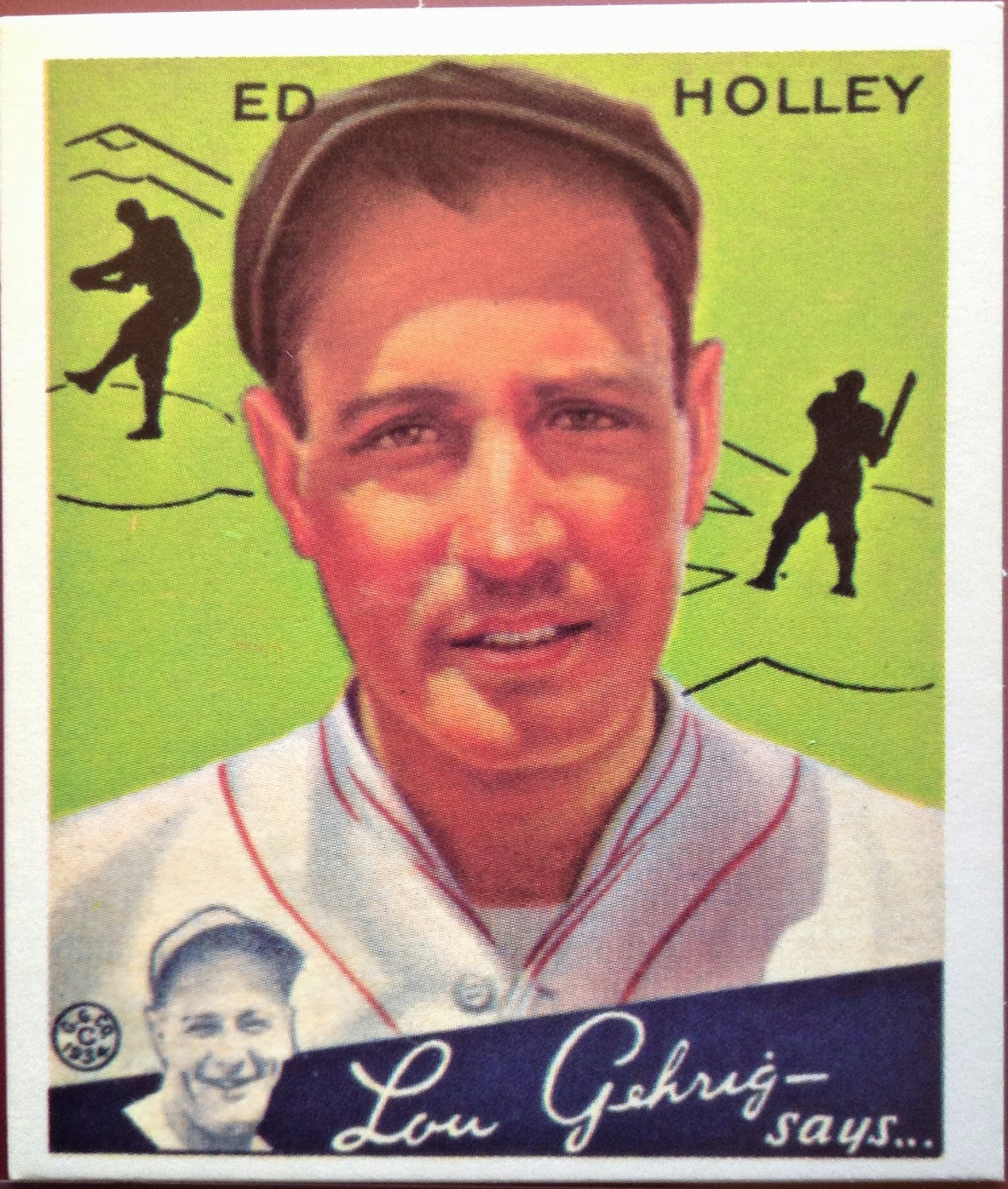 Ed Holley was Hurst's teammate in Philadelphia from 1932-33 and might have briefed Hurst on what he was getting into.  Holley had a brief audition with the Cubbies in 1928, when he got into 13 games (all but one from the bullpen) without recording a decision and posting a 3.77 ERA.

However, the Cubs weren't impressed and apparently neither was the rest of baseball.  He wasn't seen in the majors again until '32, where had 2 mediocre seasons as a regular in the Phillies' rotation before the wheels fell off and he went back home to Kentucky.

Thus concludes my reprint set trifecta from last week.  Between the 1911 Turkey Reds, 1934 Goudeys and 1941 Play Ball releases, I scored 11 new additions to my Cubs All-Time Roster Collection; not bad for a day's work!

However, that STILL wasn't all of the work I did on that day; I still found more new stuff for my CATRC in that single trip to the LCS.  For obvious reasons, this place has become my go-to watering hole.

More on that tomorrow; in the meantime, I'm going to go build a snow man or something.  Seriously, we got 3 inches of snow out here last night and if I don't just embrace the insanity, I'll go crazy myself.  It was 80 degrees this past weekend!