Getting Back Chat It

I've been in hiding.

The way that this season ended for the Cubs was a massive letdown.  After blowing the NL Central Division lead and painfully drawing out a Wild Card loss, I went into a baseball blackout, refusing to digest any news surrounding the Cubs-less playoffs in order that I might process my disappointment.  I stayed off of the blogs, Twitter, MLB Trade Rumors, and avoided even so much as glancing at a barroom TV - I wasn't messing around.

In the end, I've come to grips with the fact that the 2018 Cubs were running on fumes, held together with Band Aids and incapable of halting the juggernaut that is the Brewers (who I'm starting to think will never lose another game again).  Plus, with guys like Addison Russell and Daniel Murphy on the roster and the drama and ugliness surrounding them, I'm kind of glad to see this slogging season come to a merciful end... as well as their Cubs tenures.

Having come to grips with these facts, after a week or so decontamination, I think it's safe for me to finally come out of the bunker.  Plus, I've been ignoring a generous gift from Jason, of Hoarding Cardboard fame, and that simply won't do. 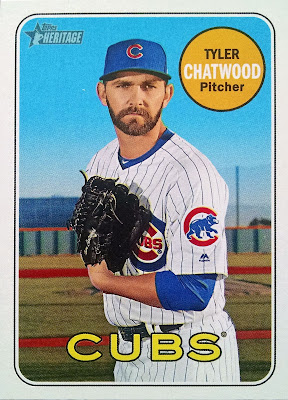 Tyler Chatwood might be the franchise's biggest free-agent bust in the last two decades.  Brought in to be a fifth starter with potential upside, Chatty instead went full-Rick Ankiel and walked more people than a Boy Scout.  However, instead of escorting little old ladies across the street, Tyler lead the world with 95 free passes in 103.2 frames - that's an eye-popping 8.2 walks per nine!  His Steve Blass-blow-up was a big reason why the Chicago bullpen ended up being so over-taxed as the season wound down.

However, though he may be one of the goats of the 2018 Cubs, he didn't beat women and wasn't endorsed by the Westboro Baptist Church - so, he's still okay in my book.  Therefore, I was still happy to see his name listed as a Cub on the Heritage High Numbers checklist and thrilled when Jason informed me that he'd be sending a copy my way.  Now, I'll be absolutely over-the-moon if Chatwood can turn things around and pitch more like he did in Colorado from here on out. 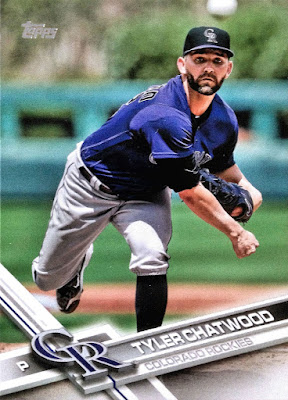 In the meantime, I'm quite happy to replace this over-saturated, purple 2017 Flagship single with the clean, crisp, and blue HHN gift from Jason - ain't bloggers grand?


Any time I get to swap out a placeholder for a true, blue Cubs card is a good time - each "Cubgrade" brings me one step closer to fulfilling my ultimate goal.   Jason clearly wants to be part of that mission, judging by the note that he included with my newest addition: 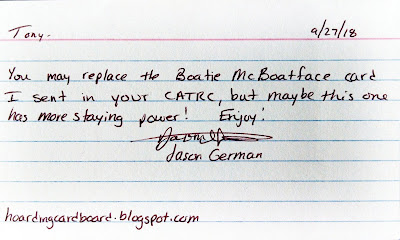 Of course, when I "Cubgrade," I have to switch cards out of my collection.  Unfortunately, one of Jason's contributions fell victim to that a little while ago, as David Bote's first official, pack-issued rookie cards started to hit the market.  Shortly after "Boatie McBoatface" started to make his presence felt, Jason had my back with a pre-rookie gem from his days with the Kane County Cougars.  As appreciative as I was, I knew this card's time in my marquee binder was likely limited, as, after his mid-season heroics, there was no way that Bote would be ignored by Topps.  Even though the local club was a Cubs affiliate at the time and the pasteboard represented a friendly gift, a bonafide Cubs card will always trump a minor league single.  That's just how it is.

Luckily, I also collect minor league cards of major league players, so that card was immediately filtered into said binder.  It made for a nice addition.  That said, Jason clearly has his sights set on being a permanent contributor to my marquee CATRC project and I couldn't possibly be more thankful.  This card is pretty safe - thank you for being so insistent, Jason, and for providing the blogging material to jolt me out of my blackout!

After a week of being a baseball recluse, I'm glad to be back.  I'm also glad to be exasperated over a playoff loss rather than a 100-loss season - as a Cubs fan, overall, that's still rare-air.  With all of the success the club has had since 2015, it's easy to forget how hapless the "Lovable Losers" were for most of my lifetime... and the previous two generations', for that matter.  Here's hoping Chatwood and the rest of the club come back strong next year, so that they can make it five postseason appearances in a row!...

...and I don't have to put my self through another detox program - that seriously sucked.

Buckle up, Cubs fans - today is going to be a wild ride!

As you may or may not know, the Cubs and the Brewers have ended the regular season in a dead heat for first place in the National League Central Division.  It's been a dog fight for the crown all summer and now it will come down to a sudden death grudge match at Wrigley Field this afternoon.  No matter what happens, the North Siders will make the playoffs, as the loser of this contest will pivot to the Wild Card tilt (sudden death, part deaux); thus, it's not exactly for all of the marbles, but moving straight on to the NLDS without another one-and-done match up would be a much more desirable playoff route.  At any rate, today is going to be one exciting afternoon of baseball in the Windy City!

But, it almost didn't come to this.

The Cubs had to win yesterday in order to force this OK Corral showdown, as the Brewers made absolute mincemeat of the Tigers throughout the weekend, and things got off to an inauspicious start.  Matched up against the much more competitive Cardinals, the Red Birds jumped out to a quick 2-0 lead and the Chicago offense looked like it would continue to slumber.  Starting pitcher, Mike Montgomery, struggled through the Cards' batting order and was given a quick hook before things could get out of hand.  Thus, Joe Maddon had to turn to his bullpen to save their division hopes.  Who would he call upon? 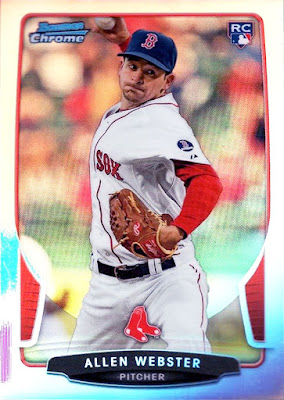 This was to be just his third MLB appearance since 2015.  An off-season minor league signing, the former Red Sox and Dodgers top prospect spent most of the season rehabbing his pitching arm.  It wasn't until August that Allen saw game action with the Mesa Cubs.  After 17 total MiLB appearances, Webster was given a September audition in the wake of Pedro Strop's injury.  Now, the Cubs pinned their hopes upon a reclamation project, who'd been in Rookie ball less than a month prior, in the most important game of the season.

Just like Theo and crew drew it up, I'm sure. 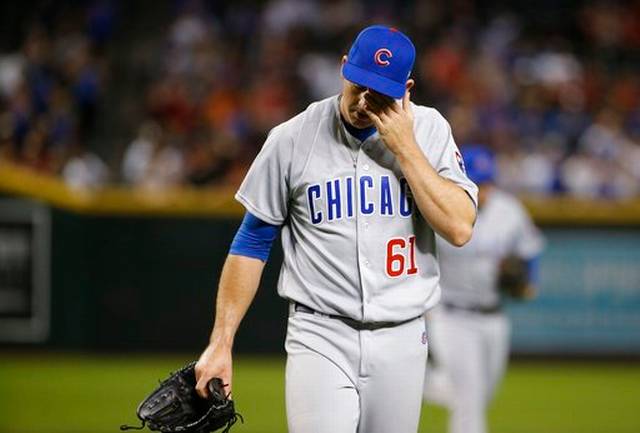 Webster, seen here after giving up 2 runs in his Cubs debut, mimicking how many fans looked after his name was announced on Sunday.  Image courtesy of The Herald.

Much to everyone's surprise, Mr. Webster ended up earning the W after twirling 2/3 of an inning without allowing his inherited runner to score.  Then, the Cubs bats busted out of their slump to push across ten runs across the next seven frames, setting up today's final face-off with the Brew Crew.

Fittingly, just the day before, I had received my first Allen Webster card in the mail, the 2013 Bowman Draft Picks & Prospects Chrome Refractor (that's a mouthful) that leads off this post.  As it turns out, that shiny bit of pasteboard was a good omen!  Upon the pitcher's initial call-up to the Cubs roster, I did not have a card ready to insert into my Cubs All-Time Roster Collection as representation.  After striking out at my LCS, I took to Ebay to track down the reflective eye-catcher, setting me back a whole dollar (shipping included).

A refractor for a buck?  I'll take that!  Especially since Webby, a fungible reliever, will probably never earn himself a card in the proper uniform.  I guess you never know though.  Maybe Now will recognize his improbable W?

And now, here's hoping that Jose Quintana goes deep and shuts down the powerful Brewer lineup this afternoon.  The odds seem to be in Chicago's favor, as Q has posted a sterling 2.17 ERA in 37⅓ innings against the Brewers this year.  Plus, the Brewers are hitting only .177 against him in 2018.  Not to mention, it's a home game and are 51-30 in the Friendly Confines this season.  Of course, baseball is gonna baseball and who knows what could happen in a do-or-die game like this one. As we've established, the best laid plans of mice and men often go awry.

C'mon Quintana!  I could do without having to cross my fingers and depend on Webster, Alec Mills, Jaime Garcia, or any other miscellaneous depth arm.  I don't know if my nerves can take that kind of stress two days in a row!

Anyway, welcome to Cubs lore and to my CATRC binder, Allen Webster.  Here's hoping you'll get to celebrate a divisional title later on this evening!