Surely a whole box of discounted baseball cards from the early '50's is much more fun than a visit from everyone's favorite 90's sitcom nemesis right?  Seinfeld segue!

In this box of gold, I found a couple more short-term Cubbies - courtesy of Bowman - at my LCS.

A couple days ago, I teased with the first card I found in the box (John Cusick, not John Cusack).  So, I don't mean to downgrade these next cards by going from the big screen to the small screen with my references.  It's just that one of them features a TV (yes, '55 Bowman). 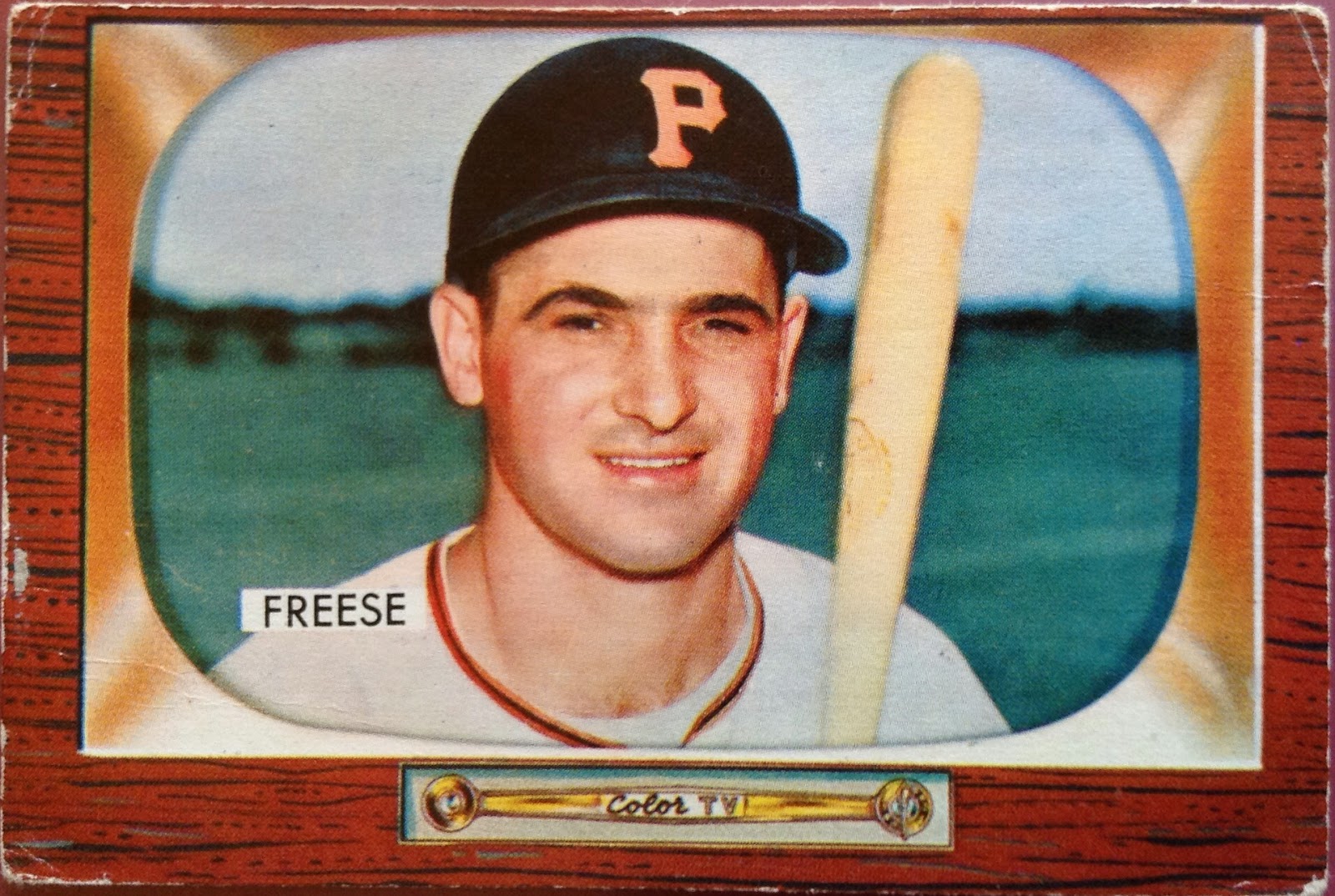 Here we have the immortal George Freese; ok, not really immortal - but this card will last on forever I suppose.  The third sacker had 3 separate stints in the big leagues, all very short and several years apart.

He originally came up in 1953 with the Tigers, but his tenure consisted of exactly one at-bat.  So he got more than Moonlight Graham or Adam Greenberg, however it was obviously rather short.  Although, the Cubs apparently saw enough and purchased his contract.

But, he never saw big league action during this stint, as he was included in a trade package to the Pirates to acquire none other than the legendary slugger Ralph Kiner.  I'm sure this is something that he bragged about for years; one isn't often traded for a HOFer.

The book was closed on his Cubs career before it ever started, or so we thought.  After batting .257 in 51 games with the Pirates in 1955, the Cubs took him right back in the minor league draft.  Unfortunately for him, in the minor leagues he'd stay for the rest of the decade.

Then, he got one last shot in May of 1961 as the Cubs briefly called him up to fill in.  Appearing exclusively as a pinch hitter, he did his part by batting .286 - nothing to sneeze at.  However, when the calendar turned to April, the glass slipper broke and George Freese was done in the majors.

The Cubbies brought him back a few years later on their big league coaching staff, from 1964-65, and he later managed in the Dodgers farm system.

I couldn't resist adding another piece of arguably the most iconic baseball card set of all-time, especially for just a buck.  The card is in excellent shape, considering it is 60 years old this year.  Welcome to my Cubs All-Time Roster Collection George! 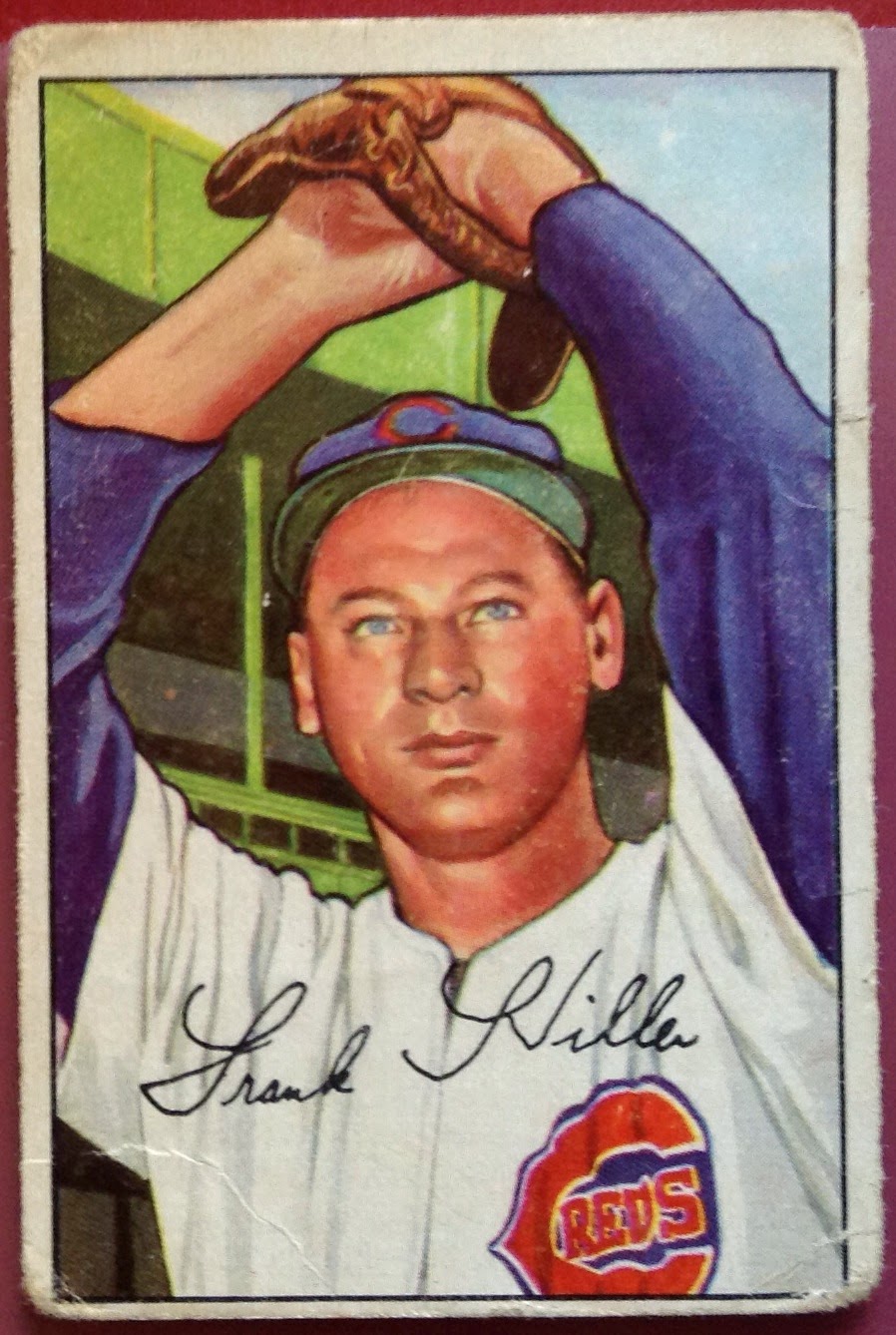 This card of Frank Hiller dates from immediately after his departure from the North Side of Chicago.  Originally coming up with the Yankees in 1946, the Cubs purchased Hiller just before the 1950 season when the Yankees deemed him a lost cause.

He served as a somewhat useful swingman for 2 seasons, posting a 18-17, 4.16 ERA in 294 innings; think of him as a Glendon Rusch-type pitcher.  But, seeing as the Cubs teams of the early 50's had some sort of aversion to useful players, Hiller was traded to the Reds for a washed-up Willard Ramsdell.

As it turned out, the Cubs really didn't lose anything anyway.  He was Reds tenure was brief and though his numbers were virtually the same, he was sent back to New York, but this time to the Giants.

After posting an ERA over 6 in 1953 for the New Yorkers, he was traded back to the minors (PCL) and never made it back up.

His career might not have been too special, but it lead to a nice piece of cardboard.  It's already part of an iconic set, but the pose and color are also exceptional.  A few wrinkles and banged up corners put it on discount, but that doesn't bother me any!

That did it for the old school Bowman and for that particular LCS.  But, the story doesn't end there; later in the week I took a trip to the LCS by my job and found a gold mine's worth of new All-Time Roster additions.

These players are even older than the ones above!

I'll have more on that tomorrow; now, I'm off to bed because I have to get up early in the morning and head to the office (ain't no rest for the wicked).