Been a while since I checked in here.  Life's been busy, lots of big life changes, figuring out this whole parenthood thing, the Cubs have been a whole bucket of bleh this year, the hobby has lost it's collective mind... I have a whole laundry list of reasons and/or excuses why my passion for blogging has ebbed, but who really cares, right?

However, yesterday, that part of my heart twinged for the the first time in a while.  All it took was an *extremely* surprising transaction.  Seriously, when I read that swingman, Alec Mills (he of no-hitter fame), was going on the 10-day injured list with a lower back strain, you could have given me two dozen guesses and I never would have called the corresponding roster move.  But before I talk about the guy going the other way on the transactional log, a little background information is needed for proper context.

For most of my conscious life, the Windy City Thunderbolts have been my local baseball team.  I've been going to 'Bolts games regularly for nearly two decades now and the independent, Frontier League club has kept me engaged with the game in ways that would be prohibitively costly with the Cubs or any Major League franchise.  I have always been able to count on a cheap ticket, a quick commute, and a good show whenever I get bored or antsy in the summer.  Sure, the level of play is nowhere near the Big Show and is roughly equivalent to Low-A ball, but baseball is baseball and the Thunderbolts are the best show in town.

With the climb up the ladder so long long, I feel an intense bit of local pride any time a 'Bolt gets scooped up to the affiliated ranks, let alone makes the ultimate ascent to the Major League level.  Just two Big Leaguers previously wore the black and blue of this Crestwood, IL-based club before reaching the summit - Andrew Werner of the Padres and Dylan Axelrod of the White Sox.  Technically, a third Bolt alumni has an MLB resume and he played with my favorite team -  Billy Petrick, a reliever on the 2007 Chicago Cubs.  That being said, his time in Crestwood came on the downswing of his career, years after his time in the Friendly Confines.  Thus, no player has ever made the dizzying climb from Ozinga Park to Wrigley Field, which isn't all that surprising, considering the almost insurmountably long odds.  Well, that is, no player had made the climb until yesterday... 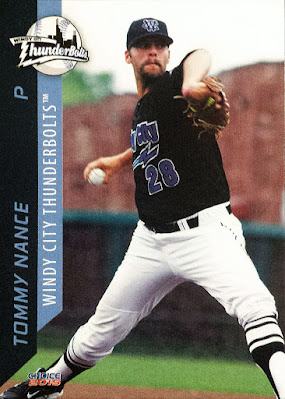 With Millsy going onto the injured list, Tommy Nance was called up from AAA-Iowa to take his place.  Nance's story is incredible, a Disney-worthy feel-good tale that is guaranteed to make you rediscover your love for baseball.  This undrafted hurler was given a shot by the Thunderbolts in 2015 to get his pro career off the ground.  His success and stuff got him noticed by the crosstown Cubbies and they inked him to a minor league deal for 2016.  In fact, I covered this transaction at the time because deals between these two Chicago-based teams are so rare and I was pumped about a Bolt just getting a shot with my beloved Cubs and I had a longshot prospect to root for and follow.

From there, Nance got hurt almost immediately and lost a good chunk of 2016 and all of the 2017 season.  When he came back, he was deployed at multiple levels of the minor league system and seemed destined for a career as a roster reinforcement, organizational arm.  After the pandemic provided the excuse Rob Manfred was looking for to retool the minors and axe so many teams and players, I thought Nance's career was surely over - he was far from a blue-chipper and there just didn't seem to be a spot for him anymore.  Lo and behold, I could not have been more wrong.

Nance survived the chopping block and turned heads in spring training this past March.  He was deployed in a handful of Major League exhibitions and parlayed that exposure into a spot at the alternate training site and then AAA once the season began - just a phone call away from the Majors.  After being part of a combined no-hitter with the Iowa Cubs, Nance punctuated his storybook breakout with a call-up to the Major League roster.  Needless to say, I was thrilled and actually yelped with excitement when I read the news.

It's not everyday a thirty-year old, undrafted, indy league alum makes it all the way to show, especially when their career is bookended by stints on my favorite local ballclubs!  It's with great pleasure that I now get to add the above Choice, Thunderbolt SGA giveaway to my Cubs All-Time Roster Collection binder - like Nance himself, the very first such card to make that impressive ascent.

Coincidentally, I'll be taking my son to his first baseball game today and it just so happens to be a Thunderbolts contest.  The club never charges admission to their spring training games, so Rowan and I will be playing hooky to see their exhibition against the Schaumburg Boomers this afternoon.  Like I said the Thunderbolts have been a big part of my life for a long time now; now, I get to share one of the most important moments of fatherhood with my son thanks to the Thunderbolts.  This is symbolic of why Nance's call-up inspired me to open Blogger for the first time in months.

Here's hoping that Nance can continue to build on this momentous surge and stick with the Big club.  The opportunity is there seeing as the bullpen has been in flux all season - a run of good results could keep him up all year, or at least maintain his spot on the 40-man roster.  Lord knows I'll be rooting for the Thunderbolt alumnus - welcome to Chicago, Tommy Nance!