The Tradewinds are a-swirlin' right now and there are rumors of a potential blockbuster, three-way deal with the BoSox and the Pads (makes sense when you consider who runs the Cubs FO).  Regardless of what happens there, the Cubs will have made at least one trade at the end of the day: 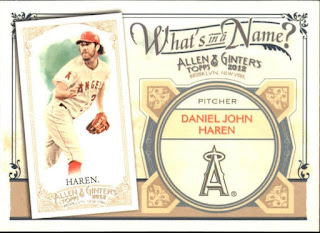 Dan Haren is now the Cubs' new fifth starter, courtesy of two minor-leaguers, by way of Miami.  Danny has an excellent 3.42 ERA right now, but his peripheral stats suggest regression is likely.  That said, as a BOR option, Haren is infinitely better than Dallas Beeler and the eternally injured Tsuyoshi Wada due to his eating of innings and contract paid by the Dodgers.

Wouldn't you know it though - I actually sealed this Ginter insert up in a trade package yesterday and I sent it on it's way before I realized that he would become a Cub.  Oopsy.  I'm sure I have another card for my CATRC - he's been around for a while.

Meanwhile, those minor-leaguers the Cubs gave up: 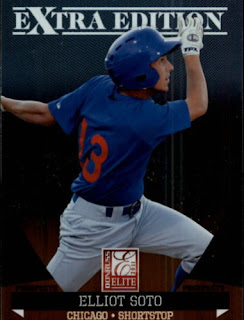 Elliot Soto is a guy I actually have a card of, which I picked up on the cheap just in case he ever reached the Majors.  He's far from a blue-chip prospect - he's been in the system since 2010 and currently resides in AA.  Plus, he was Rule V draft eligible.

... and the Cubs have a few talented middle infielders that you might have heard of too. 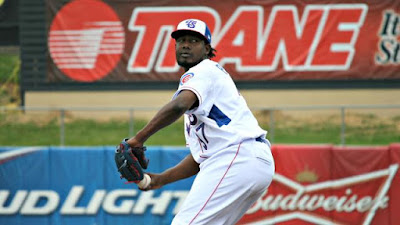 The second name was the bigger name, yet I didn't have a card of him.  Irony.

Anyway, he came over to the Cubs in the Scott Hairston deal of 2013.  He has pitched with up and down results and has had some injury issues in AA; but, he still projects as a possible BOR starter or bullpen piece.  There's definitely potential value here, but it's pretty minimal.

Therefore, the Cubs took two player with a small (at best) chance of contributing to the Big League squad in the future who were also eligible to be snapped up for nothing at the end of the year and turned them into a quality fifth starter.  I'd say it was worth it.

Meanwhile, this isn't the first time the Cubs have attempted to trade for Haren either.  Back in the winter of 2012, the Cubs had allegedly agreed to trade the talented but wild reliever Carlos Marmol to the Angels for Haren, straight up.  However, it's said that Dan's medicals spooked the Cubs and that caused them to nix the deal. 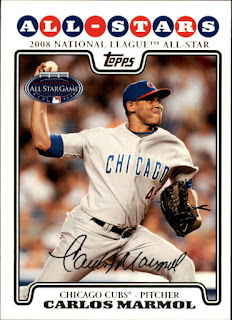 Oh Carlos - from All-Star to all-gone :(

In retrospect, it would have been a pretty good trade for the Cubs, seeing as how the wheels completely fell off of the Marmol train and Haren hasn't made fewer than 30 starts since then.  Hindsight is 20/20 and all that.

In 2010, I was in St. Louis for a sports-writing conference and the association was kind enough to include tickets to a Cardinals game for some post workshop entertainment.  Now, I may be a Cubs fan, but I will never turn down free baseball tickets.  That would be un-American.

So, I went with a large group and thoroughly enjoyed myself - new Busch Stadium is a beautiful place to take in a ballgame and it really invokes the atmosphere of new-retro parks like Camden.  What does any of this have to due with Haren though?

The Cards were taking on the Diamondbacks and Dan Haren made the start.  He was pretty mediocre (6IP, 4ER) and the Cardinals staged a late game rally to win it in the end.  But, in what has become one of my favorite things that I've witnessed personally in sports, Randy Winn (who had just been acquired days earlier) channeled his inner Jose Canseco. 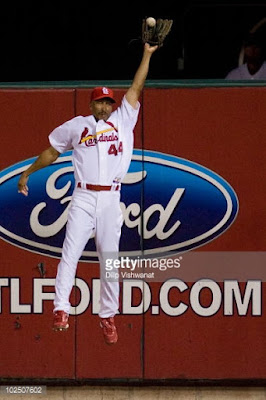 It's hard to tell from that image and I couldn't figure out how to embed the play from mlb.com (check it out here), but the ball bounced right off of Randy's glove and over the wall.  Ouch.

I don't think he'll ever forget that one.  Nor will I.

Anyway, Dan Haren is now a Cub.  I'm going to wrap this up and go back to obsessively monitoring MLB Trade Rumors and Twitter like a crazy person.  This has easily been the most exciting trade deadline in years!