When Bugs Bunny utters that familiar phrase, he's usually commenting on his foil's lack of intelligence. 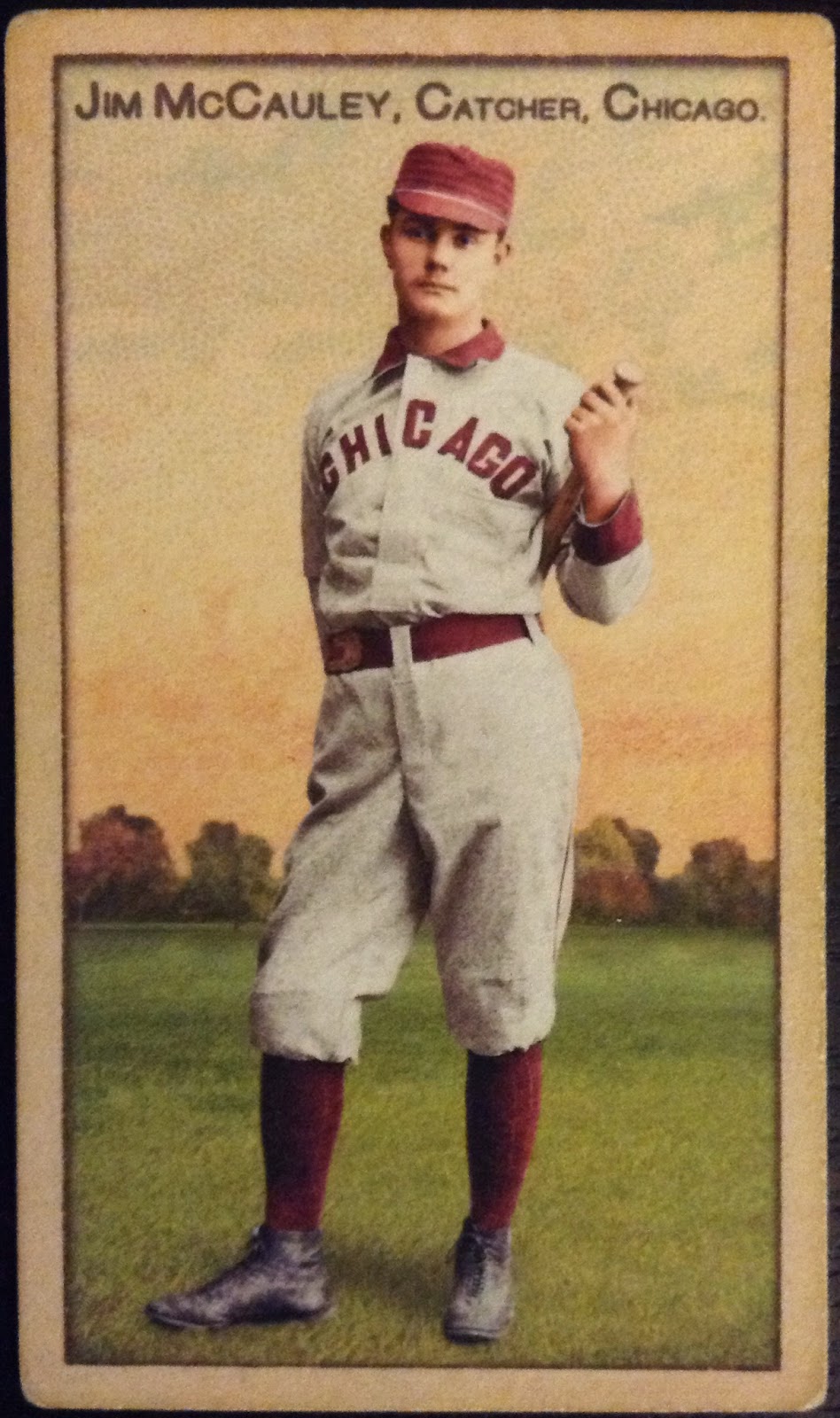 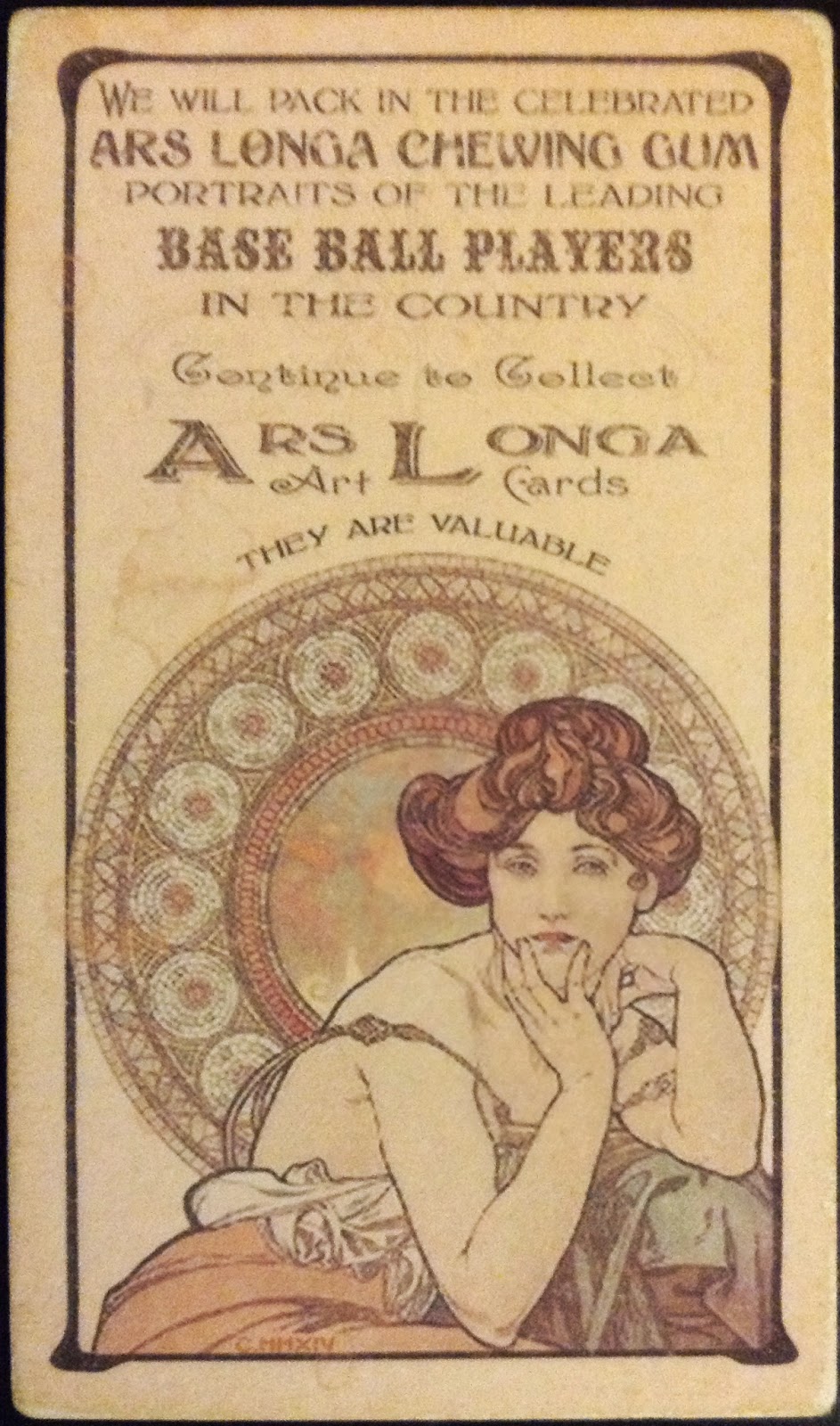 However, I'm sure Jim McCauley, depicted here on a lovely Ars Longa Art Card that I recently acquired, was no stooge - at least not to the level of Elmer Fudd or Yosemite Sam anyway.

No, McCauley just so happened to be a CHICAGO Maroon.  Oh, you've never heard of them?  Well, neither had I until I came across this card.  Don't worry, I'm not going to get all hipster on you.  I assumed it had something to do with the University of Chicago.

The Maroons of Chicago were a member of the Western Association in 1888, which was class A ball - the highest minor league classification of the time.

Information is spotty (I mean, it was 126 years ago) but it seems that it was the first year for the WA and they operated through 1891.  At any rate, only in 1888 did it include the Maroons. 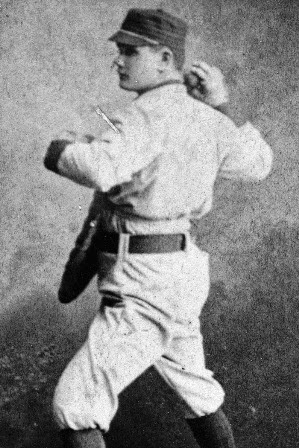 McCauley showing off his catching ability


Jim McCauley was a former big league catcher, trying to keep his dream alive in pro ball.  After brief stints with St. Louis in the American Association and Buffalo in the NL, McCauley came to Cap Anson's Chicago Cubs (then White Stockings) for a whopping 3 games to play the third-string behind Silver Flint and HOF'er King Kelly. 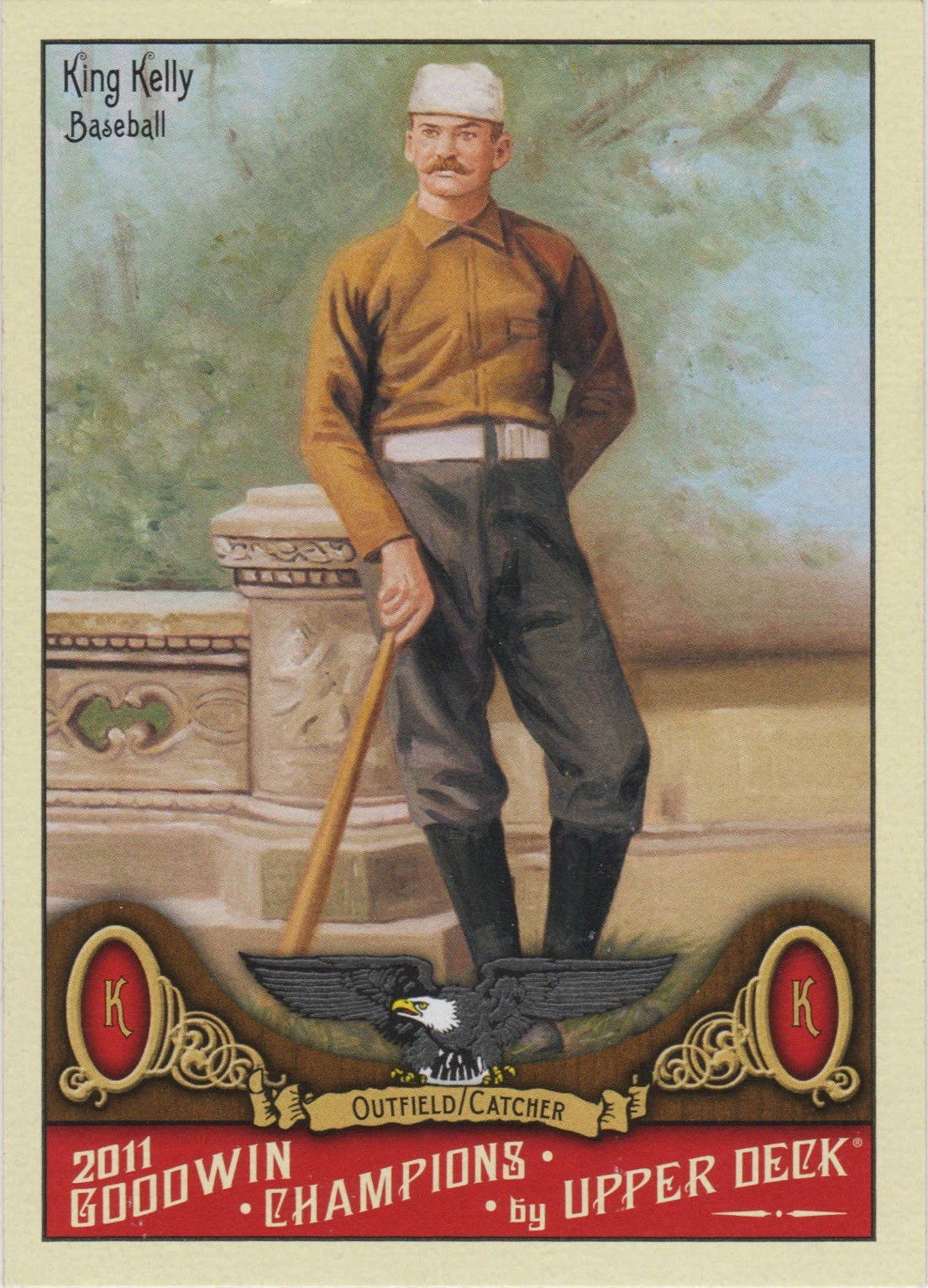 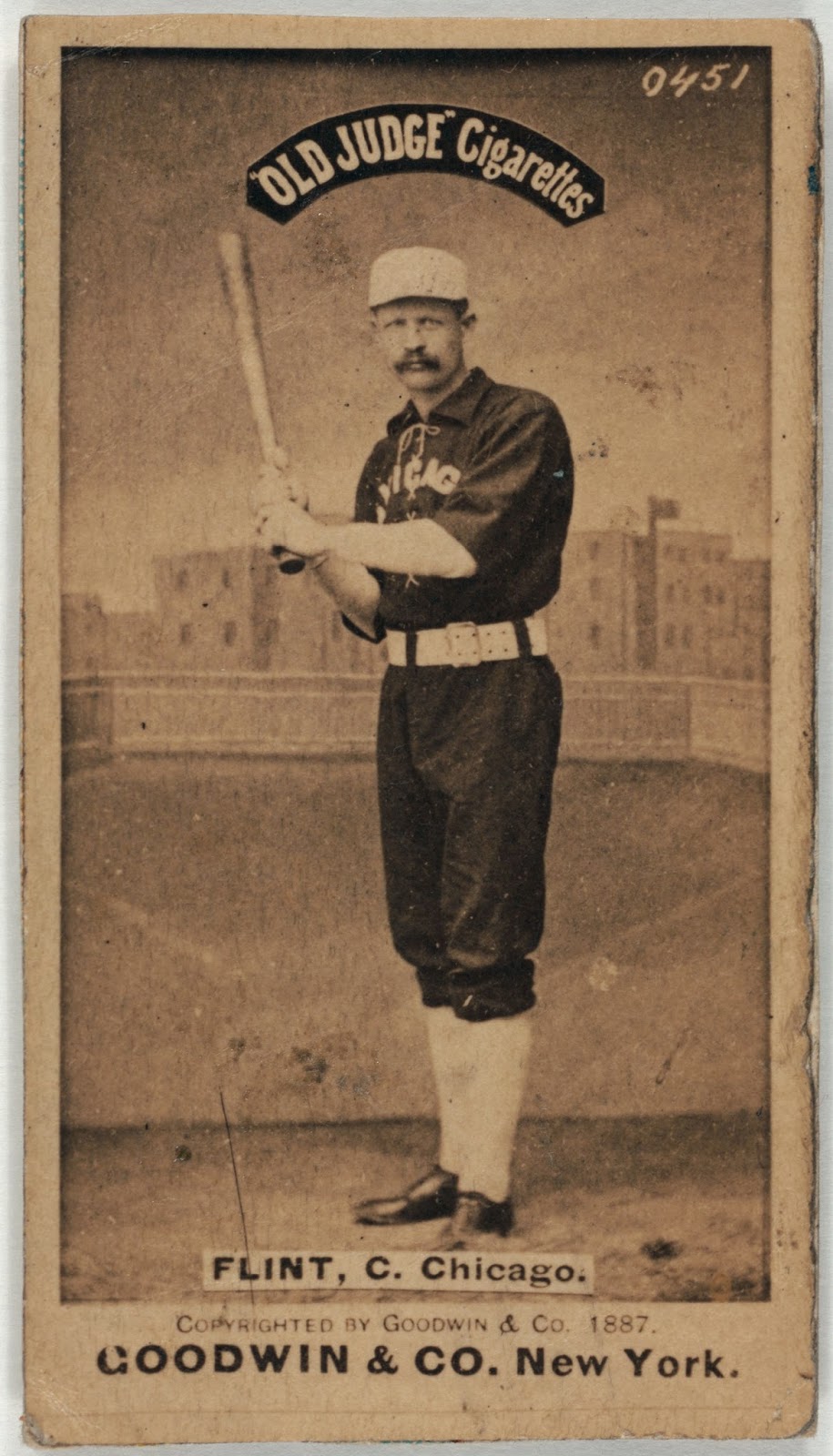 Jim's teammate King Kelly resides in my CATRC, but Mr. Flint is currently a pipe dream


He got 1 hit in 6 at-bats and was sent packing.  After an audition with Brooklyn the next year amounted to little more action, he found himself washed out of the Majors.  But he didn't quit.

Including his 16 games as the starting catcher for the Maroons, McCauley kept on trucking until 1897; but, he never got the call.

You and I would have never learned his story or his team without this card, a fine piece from Ars Longa Art Cards and their "Beginnings: 1880's" series.


I've sung the praises of this card company in my posts about Wild Bill Hutchison and Marty Sullivan; so I won't beat these sentiments into the ground here.  Just know that these vintage-looking cards are well-made and demonstrate superb artistic skills as well as baseball knowledge.

After making the impulse purchase of this card from their Ebay store late one night (I'm as bad as my father is with infomercials), I was contacted by the man behind the magic - Jesse Loving - and it turns out that he's a fan of my project!

As a thank you for my previous reviews on his work, he even offered to send me a bonus card, no charge, of another Cub that I had yet to acquire!

Is that bribery?  Who cares; I'm from Chicago anyway. 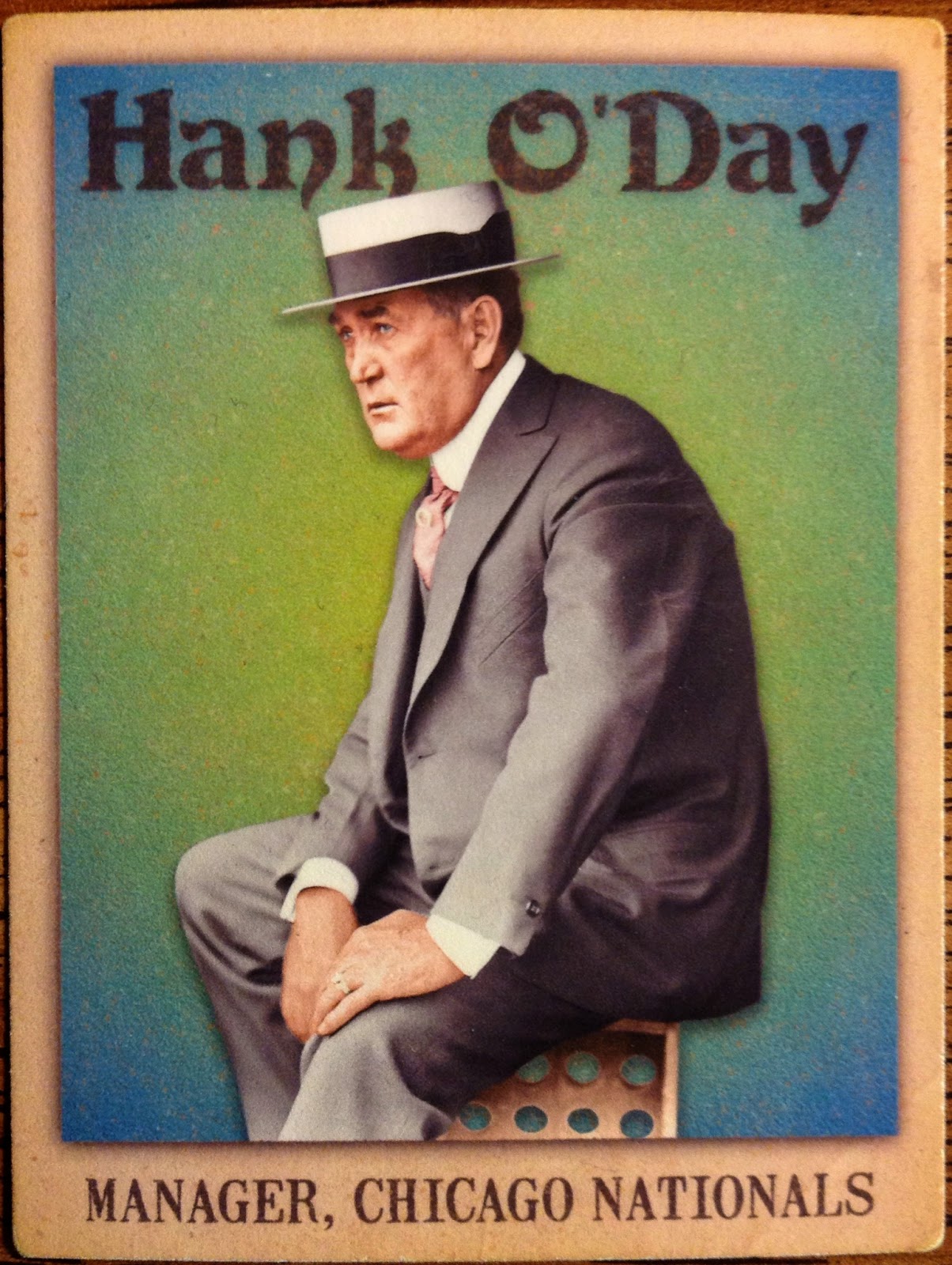 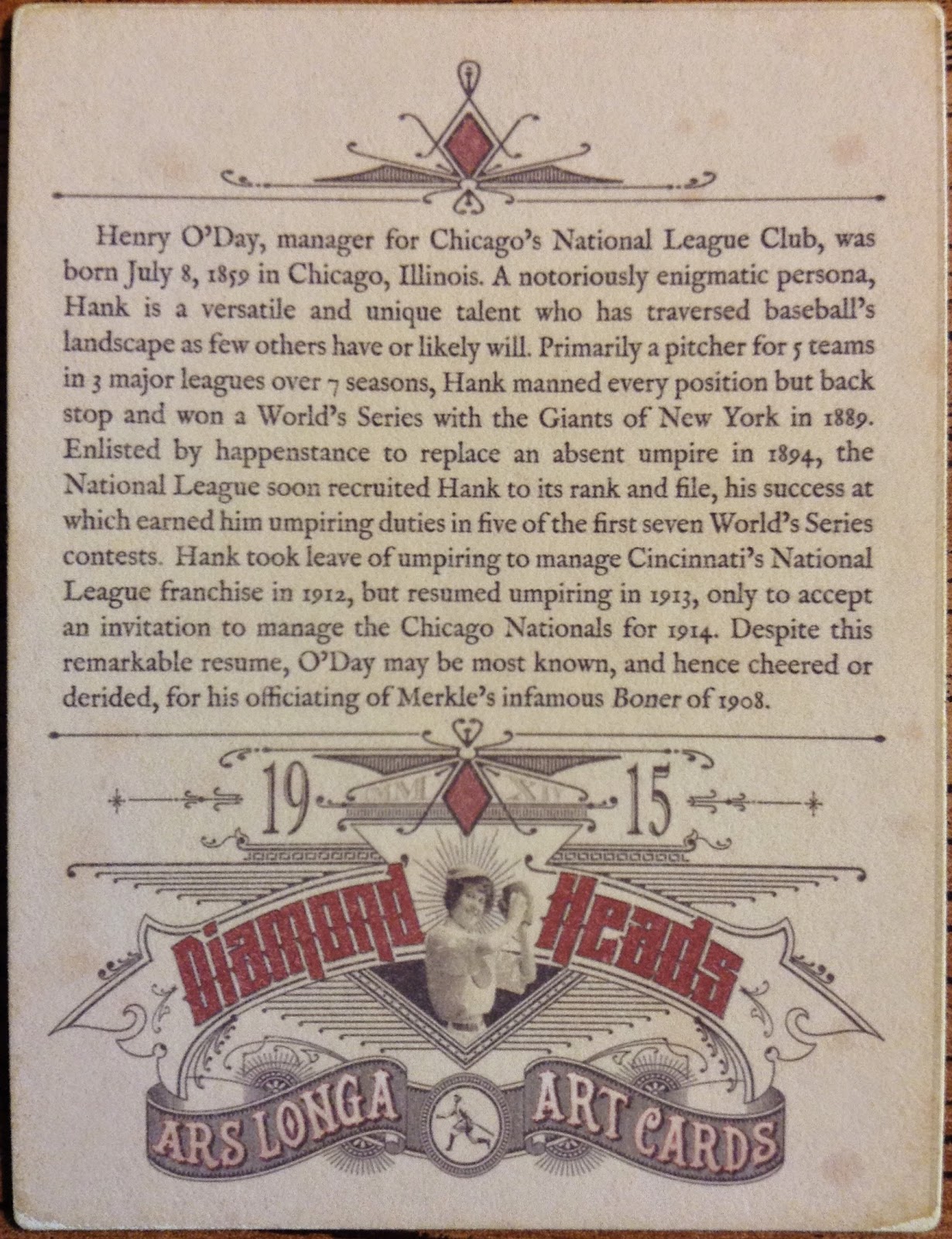 That is truly a beauty from their new Diamond Heads '15 checklist.  The set takes elements from Cracker Jacks, Goudeys and US Caramels and blends them into these 2 3/8 x 3 1/8 bad boys.

Combine those influences with detailed 1915 biographical information on the back (hence the '15) and exceptional artwork (front and back) and you have yourself a nice product.

Bonus points for the blue background on a Cubs card!  You might say that this card made my "O'Day!"

Hank O'Day was one of the few managers I had yet to find.  He never appeared for the Cubs during his playing career, but skippers count in my collection too.

He led the club for just one season, 1914, taking over for Johnny Evers after the latter was traded away to Boston.  He led the Cubs to a mediocre 78–76 record and a 4th place finish, before being replace by Roger Bresnahan for 1915.  But it wasn't his managerial career that sealed his place in Chicago history. 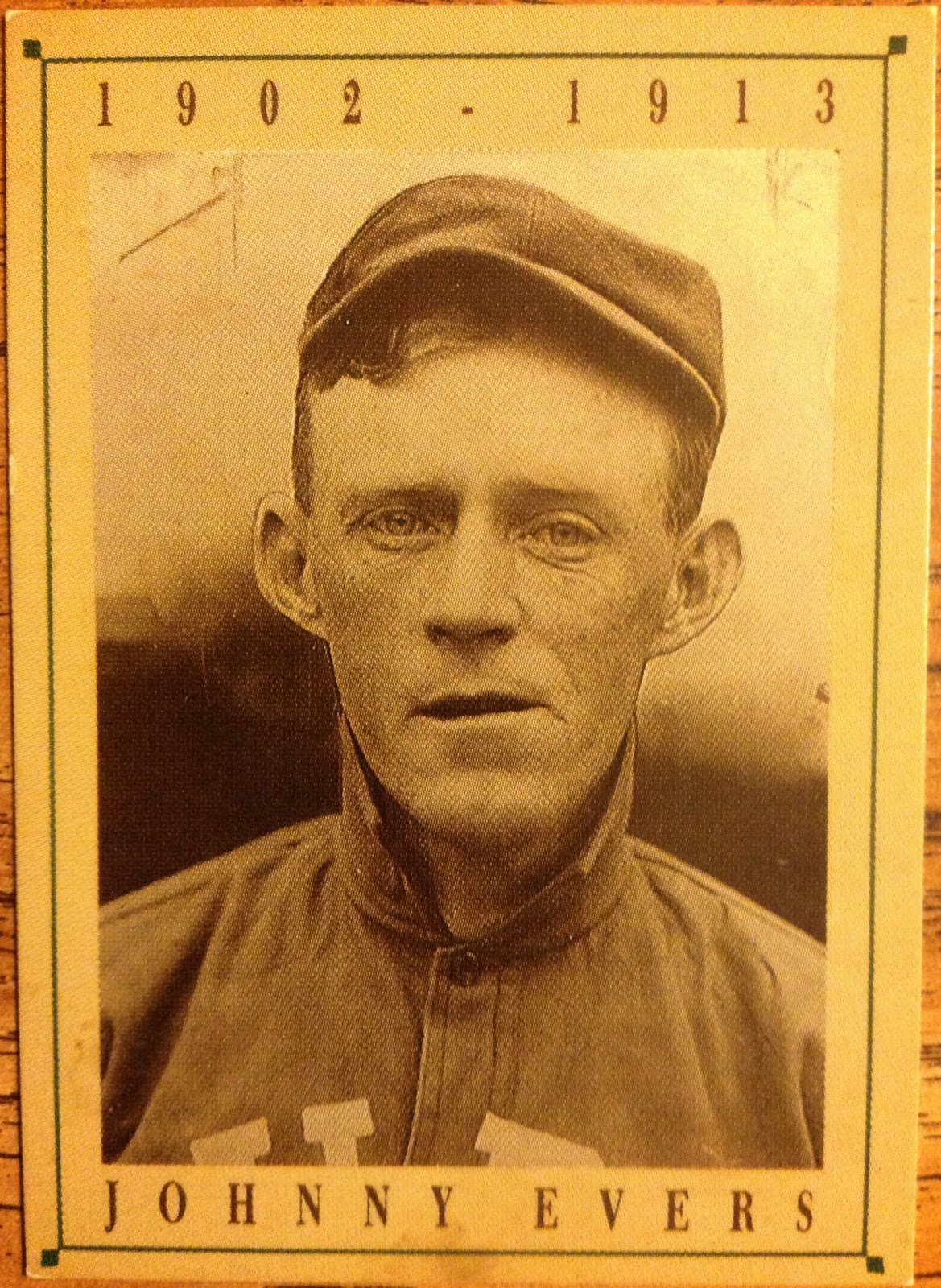 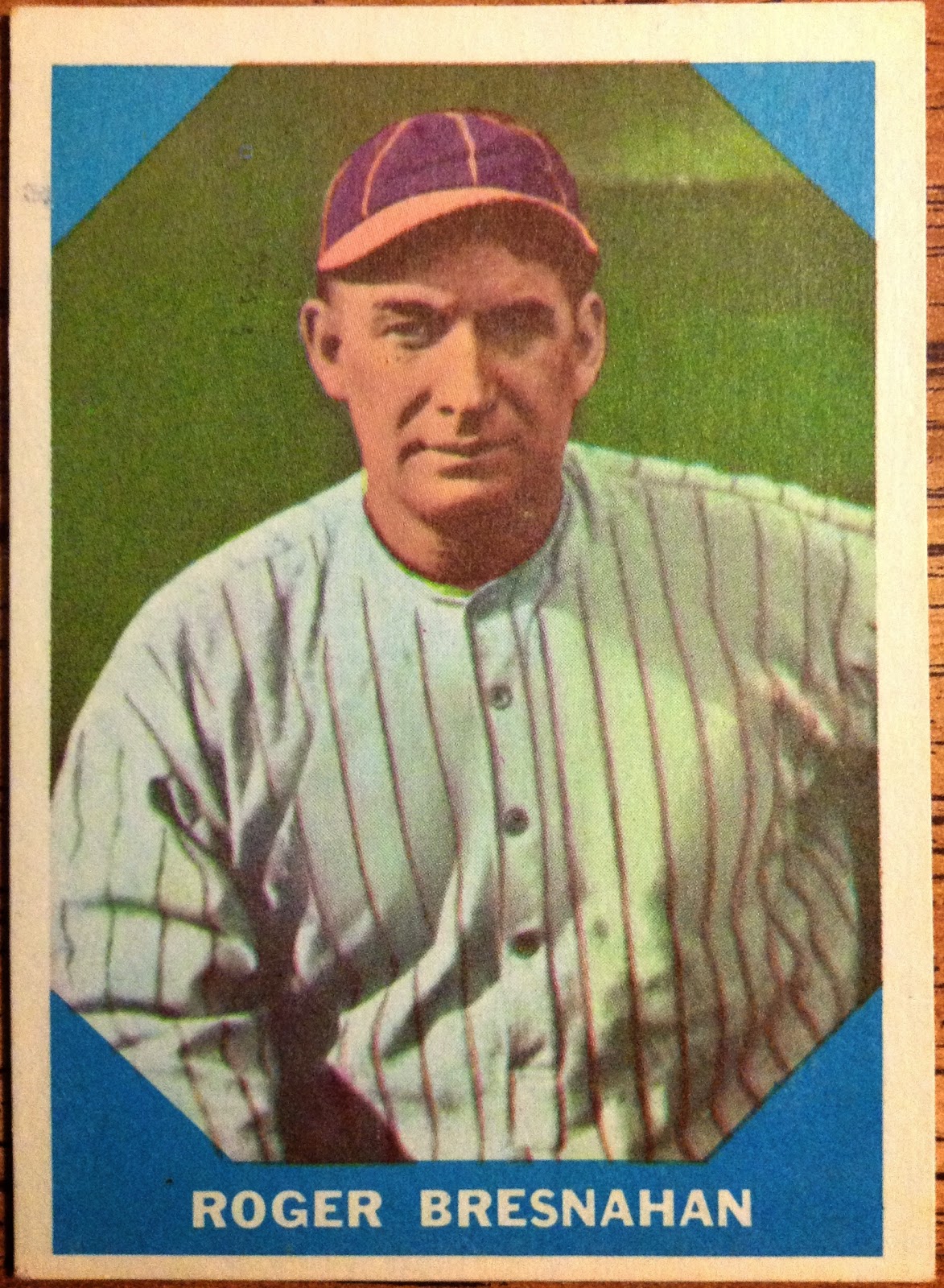 Technically, the Cubs had 3 successive HOF'ers managing their club in the teens


You see, "The Reverend" was much better known for his umpiring career; in fact, he was inducted into the HOF for it in 2013.  In fact, he was the crew chief one September afternoon as the Cubs and the Giants battled for the pennant:

"On September 23, 1908... Al Bridwell's apparent single drove in the apparent winning run. However, baserunner Fred Merkle never advanced from first base to second, in keeping with the common practice of the era. When the Cubs produced a ball – not necessarily the game ball, which had been thrown into the stands – and claimed a force play at second base, which would negate the run, the debate erupted."

O'Day ruled Merkle out and the game was replayed at the end of the season.  The Cubs won that game, giving them the Pennant and, eventually, their most recent World Series triumph.  Who'd have thought that he'd be managing that same club 6 years later? 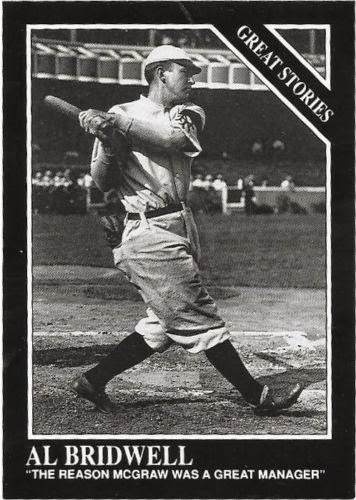 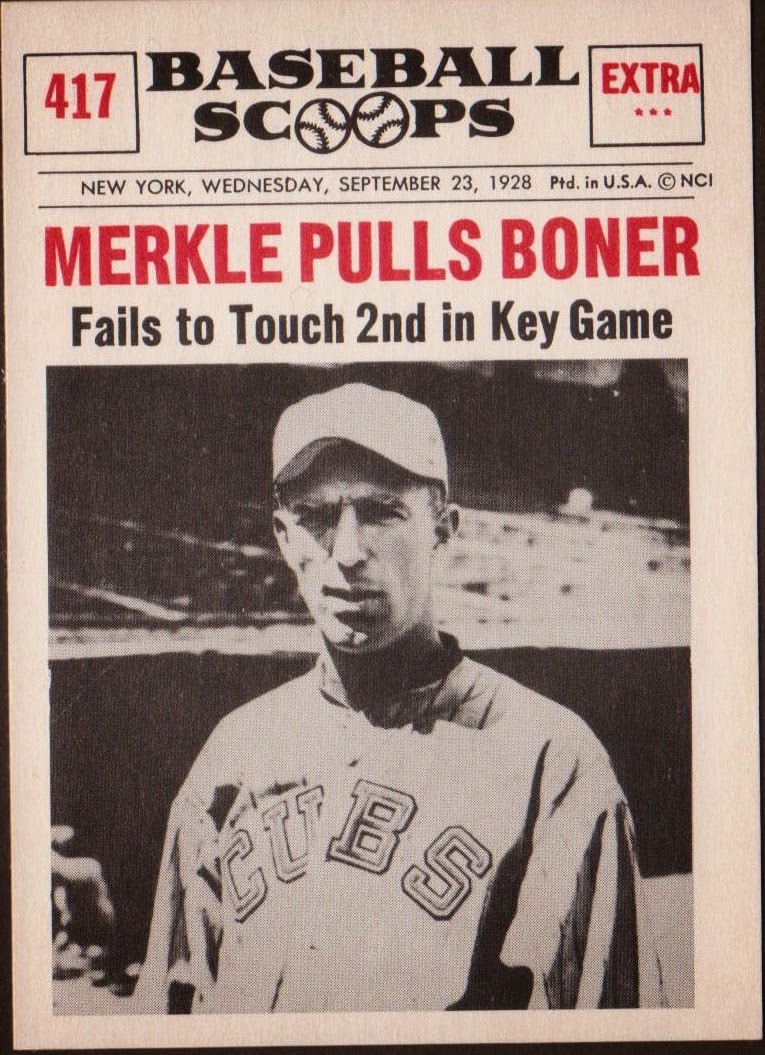 Turns out that all the parties involved later became Cubs and thus enter into my CATRC
Also, can you spot the two "boners" on Merkle's 1961 Nu-Scoops card?

But, getting back to the card itself, it would be a crime if I didn't mention the packaging that it came in.

Why? Well, because it's as much of a piece of art as the main attraction is.

My Hank O'Day Diamond Heads '15 came seated inside of a top-loader with this eye-catcher in front: 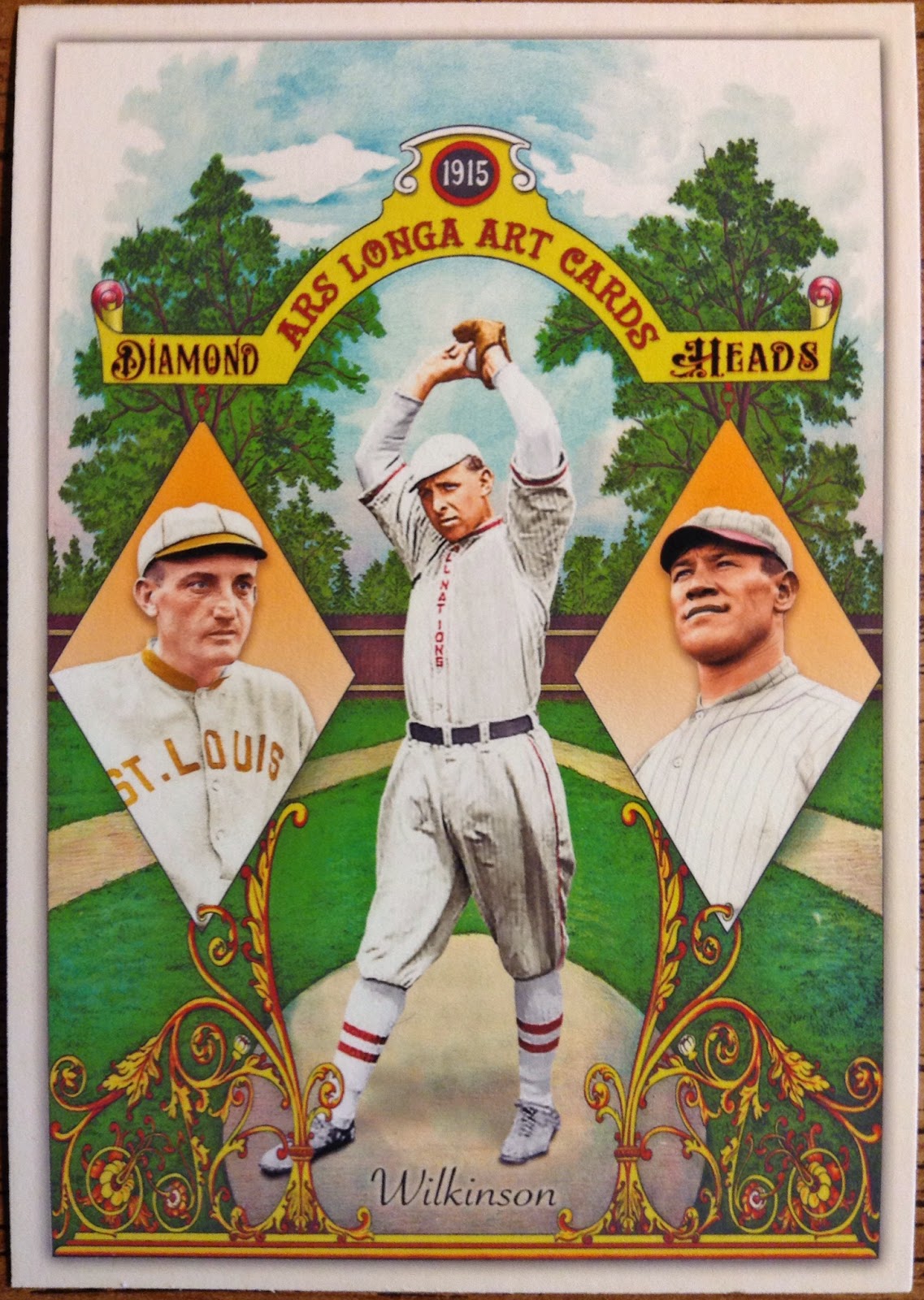 Each series has their own unique "redemption card" like the one you see above.  If you collect 10 of them (no matter which series), you can mail them back into Ars Longa for a free card from a mysterious and otherwise unavailable series.

Anyone out there accomplish this?  My curiosity is piqued.

And so, that's the story of how some late-night impulse buying lead to my contact with Jesse Loving of Ars Longa Art Cards.  I must say, he's a good guy with a deep knowledge of the game's past and some serious designing skills!

I hope to continue doing business with him in the future and I highly recommend that you do so as well. Everyone could use at least one of these curiosities in their collection.

Without him and his art cards, I never would have been able to add Hank O'Day or Jim McCauley to my Cubs All-Time Roster Collection.