Well Past the Deadline

I've never been great with deadlines.  As a habitual procrastinator with an atrocious memory, I often leaves tasks until the very last minute.  Obviously, this often causes timing issues.  Back during my school days, I sometimes had to beg a teacher or professor for mercy after forgetting to turn in a project on the appointed day or just missing an online submission deadline by minutes as a result of my last-minute rushing.  I may have once completely forgotten to do a semester's worth of online assignments until the last week of classes and lied my ass off... errmm... convinced myself and my prof that an unreliable internet connection was the culprit behind my tardiness.  I'm not particularly proud of that fib, but I only got half credit and it did save me from failing the class, in the end.

Furthermore, anyone who has been reading this blog over the past few years has noticed my issue with timeliness and the absurdity of 2020 only exacerbated that problem.  In fact, when it comes to documenting new Cubs added to my Cubs All-Time Roster Collection during this abbreviated season, I missed just about everything that happened here on Wrigley Roster Jenga.  Six plus months of missed content?  Now, that's a series of blown deadlines that no amount of groveling would have fixed, back in the day.

Last summer, the Cubs were caught in the throes of contention; but, after a blazing hot start, the team had started to revert to the mean.  With a flawed roster that needed upgrading if they wanted to stay on top in the NL Central, Theo Epstein worked with the budget limitations imposed on him by the front office and used his last trade deadline with the team to try and patch up some of those holes.  As it turned out, none of these last minute moves of desperation did much to turn around the team's slow spiral. Maybe waiting until the last minute - like in school or blogging - was, in fact, waiting until it was too late?

That being said, Theo was able to get four moves made before the stroke of midnight - or 4pm eastern - on trade deadline day; so, he did better than I often did with ultimatums. That's why these trades were consummated and this blog post is... well past the deadline! The cast of characters that was imported onto the roster are a bunch of guys that, in a couple years time, we'll look back and say to ourselves, "he played for the Cubs?  I don't remember that at all."  Perfect fodder for Daily Random Cub on Twitter.
On the day before the deadline, former Cardinal power threat, Jose Martinez, was acquired in a trade with the Rays, in exchange for a player to be named later.  As it turned out, a nameless player might have been of more use to the team than Jose, as the guy brought in to be a lefty masher off of the bench didn't so much as record a single hit in his 22 plate appearances in Cubbie Blue.  It seemed like he rolled one over to second base every single time he stepped up to the dish.  In fact, things got so bad that he was even sent back to the alternate training site to retool because it just was not happening on the Major League roster.  Not exactly the performance you want to see from a supposed reinforcement meant to fix a struggling offense. 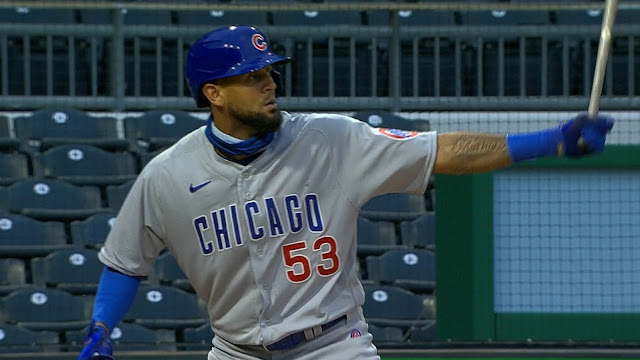 Image courtesy of the Marquee Sports Network
After the conclusion of the 2020 schedule, Jose was - unsurprisingly - non-tendered and he eventually found a new home with the Mets.  Both the fact that Jose's bat didn't show up during his time in a Cubs uniform and his brief tenure with the club contribute to his "random Cub" status; however, another factor (to me, at least) is that he did not end up making a Cubs appearance on a baseball card.  It's supremely disappointing that the print cutoff for Update, the card set who's whole purpose is to "update" player movement, is so late that it can't do properly do it's job.  Deadlines strike again!
I thought there was at least a chance that Jose might show up in Topps Holiday or 2021 Series One as these types of acquisitions sometimes do.  Maybe if he'd actually done anything in blue that might have happened.  As it stands, I'll have to settle for the 2019 Opening Day single you saw above, even if it is in Cardinal colors.  It was the only Jose card that I could find in my LCS. 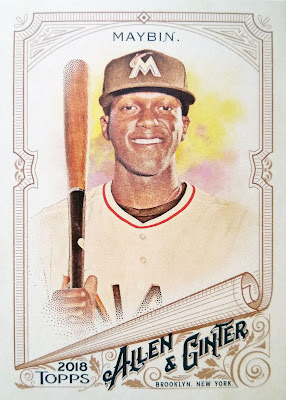 Speaking of which, here's a card of the next guy that was brought in this summer to assist the offense.  Again, he hasn't appeared on a true Cubs card and, despite being a veteran player, this 2018 Allen & Ginter single was the only pasteboard I could find of him in the whole card shop.  I may be the black sheep of the blogosphere with this hot take, but I just don't like the look of A&G... I never have either.
Cameron Maybin has been around the game a long time, having first reached the Major Leagues way back in 2007.  Theo and crew thought that some extra veteran leadership might be nice to have around the clubhouse, especially from a well-rated defensive outfielder who could come off the bench and fill the role that Steven Souza failed to seize.  Cam did just that - he wasn't flashy, but he proved to be a useful spare part in what, as of now, appears to have been his final Big League season.  He even contributed a walk-off win down the stretch, though it came in the form of a bases-loaded hit-by-pitch.  All in all, I'm glad that this guy got to go out as a Cub.
Finally, in the waning hours of the transaction period, the Cubs also made a couple of moves to shore up the left-hand side of their bullpen.  One of these new imports, Andrew Chafin, was already covered in a previous post, as the franchise decided to bring him back for the full 2021 season after his abbreviated 2020 audition.  In that post, I was so late that I ended up coming full circle and becoming timely again.  Unfortunately - well, depending on how you look at it - this was not the case with the other pitcher brought in on that day: 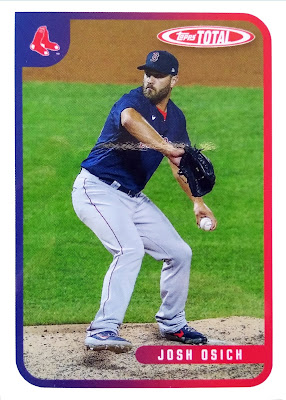 Anyone have to clear their throat ?  It's time to hock a LOOGY!
Josh Osich has become your prototypical southpaw journeyman.  Having already blown through the Windy City and onto Cincinnati, the first game in which he appears with the Reds will mark his fifth franchise since 2018.  Thus, you won't be surprised that Osich features the traditional profile for your average lefty - tough on same-handed hitters, but couldn't put a golf ball by a righty.  Of course, that meant that David Ross used the Red Sox expat on the latter almost as often as the former for some god forsaken reason and immediately exposed his weakness.  Josh gave up three earned runs in just 2.2 innings, good for 10.14 ERA and the groans of socially distanced Cubs fans everywhere.  No wonder he left town.
Also, as is common for LOOGY's and journeyman, Osich has not gotten a lot of love from the card companies.  Despite a five-year MLB career, prior to his 2020 Topps Total appearance (which I opted to purchase for my CATRC) Osich hadn't made a mainstream cardboard cameo since 2011, when he made two logo-less appearances in Donruss Elite Extra Edition and Playoff Contenders.
No respect for relievers!  For that reason, it should come as no surprise that, like Maybin and Martinez before him, Osich's brief tenure with the Northsiders will not be immortalized on cardboard.  Gosh I wish there was a bigger emphasis on actually documenting the MLB season - or, at least one product which made that their mission statement - rather than pumping out mega mojo hits of the hottest prospects.  That being stated, this is a rant for another post.
And there you have it, my wrap-up of the new Cubs acquired just before the 2020 trade deadline... only six months behind schedule.

The 2021 edition of deadline day may be quite different, unfortunately.  Although the purse strings have loosened slightly over the past couple of weeks, the wishy-washy Cubs could still find themselves as sellers for the first time since the summer of 2014.  With so many of their core guys playing on expiring contracts, the cheapskates that run the club might start to break up the band and trade Rizzo, Bryant, Contreras, and Co. for a bunch of teenagers who work at Wendy's.  Here's hoping I don't have to write about that, as it would most likely take me ages longer than six months to find the motivation needed for that disparity.
In the meantime, welcome to Chicago and goodbye from Chicago to Jose, Cameron, and Josh.  Though your time in the Second City was brief and ended in ultimate disappointment, your Cubs tenure will be commemorated in my CATRC binders forever.  No deadlines to miss there!
Posted by Tony Burbs at 2/16/2021 08:17:00 AM