Today is my son's sixth month "birthday."  I honestly cannot believe that little Rowan is already half of a year old.  Even more incredible than that fact is that I've managed to keep him alive for that long!  I think anyone out there on the blogosphere who also has children will understand that surprising sentiment, as the chaos, stress, and unpredictable challenges that come with raising a newborn.  The false alarm health scares, the bottomless pit appetite, the inconsolable colic-caused temper tantrums, random night terrors, etc. - it's hard not to feel like you're doing it wrong!  Yet, here we are, half of a calendar year later with a happy and healthy little cherub.

To celebrate this milestone, here's the only card in my collection with a baby on it. 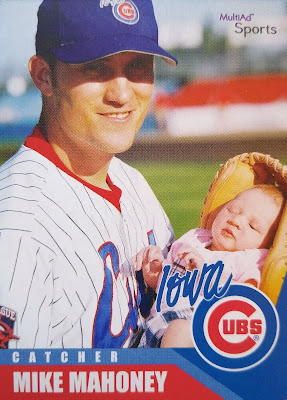 The 2002 MultiAd Sports single that you see above - featuring journeyman catcher, Mike Mahoney - has long been one of my favorite cards due to it's unique photograph.  Originally issued as part of a factory sealed SGA set, I have no doubt that it stuck out from it's cello-wrapped brethren - talk about a rookie card!

However, since Rowan has come into my life, it has taken on a new significance.  Now, rather than just appreciating an off-kilter picture, I too understand and feel that beaming pride that Mike exuded while showing off his newborn daughter 19 years ago.  Thus, when my wife scheduled Row's newborn photo-shoot a couple of weeks after his official introduction to this world, an idea crept into my mind.

First of all, let me just say that the photographer was a miracle worker. When your talent is a cranky newborn and a pair of neurotic, first time parents, I can't imagine it's easy to get anything done. That said, she produced a whole reel's worth of timeless snapshots that feel like they belong in a coffee table book more so than a simple photo album.  If you ever need to book a photog in the Chicagoland area, I strongly recommend that you check out Photography By Angel for any occasion - she does far more than just newborn pictures.  Exhibit worthy work, positively pleasant to work with, excellent customer service... she is, in fact, an Angel!

Anyway, after we got all of the posed shots that she wanted during our booked slot, we had a little bit of extra time. Luckily, I just so happened to have brought my Cubs jersey, hat, my high school baseball glove, and the perfect idea with which to close out our session: 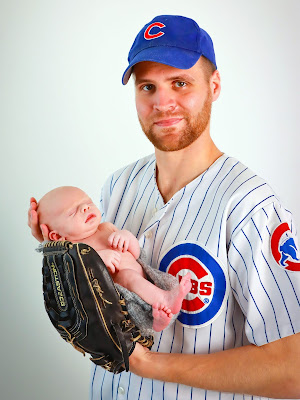 And it turned out even better than I had hoped!  Although, thankfully we shot on a blank background because it still seemed like it was missing something: 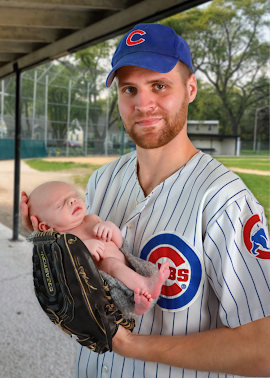 Rowan definitely needed a baseball backdrop to complete the look.  To keep things close to home, I opted to use a picture that I took from the dugout of Howie Minas Field, a local ballpark that's been a cornerstone of the community since it was plowed into a cornfield 70 years ago.  This field has played host to the National Baseball Congress champion Midlothian White Sox, the Cook County Cheetahs of the Frontier League, the Crestwood Panthers of the Midwest Collegiate League, and Rowan and I when we we noticed the gate was left open during a summer walk around the surrounding park.  So, of course, we stopped to take some pictures in the dugout.  As it turned out, they provided the perfect canvas for my latest Photoshop project.

Shhhh... don't tell anyone!  But, here are a few more pictures from our little visit:

If you want to learn more about the history of our little ol' community ballpark, I get a little more in-depth in this previous post.

Anywho, circling back to the reason for this post, happy half a year birthday, Rowan!  Six months simultaneously seemed to breezily fly by like a jet and yet also drag like a low rider with flat tires.  It's funny what having a child - and the ensuing lack of sleep - will do to your sense of time.  I'm sure that Mike Mahoney and his now college-aged daughter will agree.

Here's to a lifetime's worth of further baseball adventures, Row! 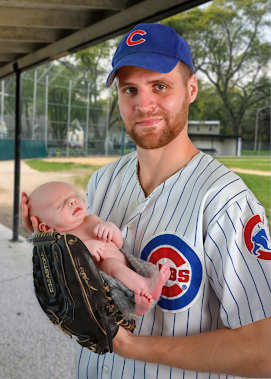 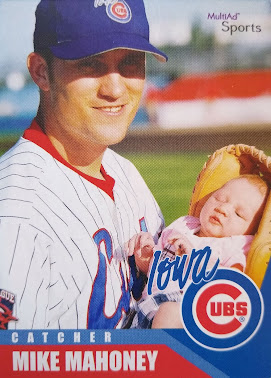