I was scrolling through Facebook on my phone this morning - something that I do these days with far more regularity than I care to admit.  There's not much else one can do with one hand while bottle feeding a temperamental infant in the pre-dawn hours in order to stimulate the mind enough to stay awake.  Sure, I guess I could invest in a Kindle or something and read about something that would enrich my mind instead of foster my belief that humanity is doomed, but... okay, I don't have a but.  Maybe I do need to do that, for the sake of my sanity.

Anyway, if nothing else, this early morning doom scrolling did give me some content for a blog post; so, this waste of time has not been all bad!

This afternoon is the 63rd running of the annual Daytona 500 - one of the marquee auto racing events in the United States. To the Joe, when asked to name one car racing event, they'll likely pull out the Indy 500 or Daytona 500 and I haven't missed either since 2001.  In years past, I was as fervent a NASCAR fan as I am now a Cubs/baseball fan.  Over the decades, my interest has waned and I no longer watch stock cars run around in circles for three hours every Sunday; that said, I still tune in to the major events in motorsports, seeing as they have that extra bit of "oomph" in terms of excitement.  At any rate, the old algorithm knows this, as I scrolled across this targeted ad in my Facebook feed while giving Rowan his 5:30am bottle: 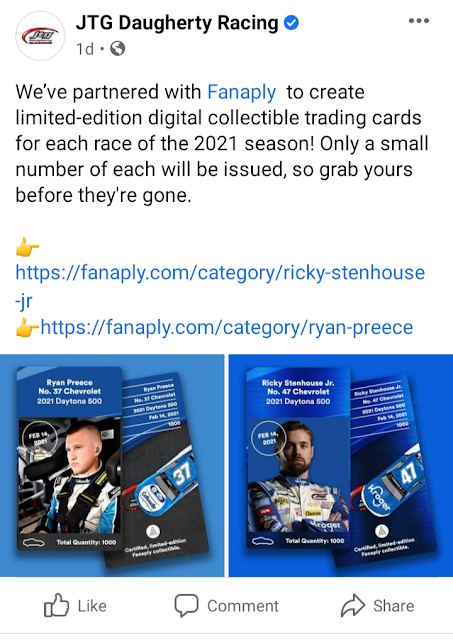 Well, I should say that it was an advertisement LIKE this one.  I zoomed past it before my brain fully registered what I was looking at and, by that point, it was gone forever.  So, I dug up a similar one on the official Facebook page of JTG Daugherty Racing.  In case you were wondering, JTG Daugherty is a NASCAR Cup series team that is co-owned by former NBA star, Brad Daugherty.  That's right, Michael Jordan's new 23XI Racing wasn't the first basketball-funded foray into the world of stock cars.

But back to the ad, those images sure do look like digital trading cards, don't they?  I've tried Topps' foray into the computer-only card market with Bunt and Skate and even gave Honus Bonus a fair shot, but .jpg's of pasteboards do not hold my interest.  I haven't even looked into the whole Topshot thing that's been the talk of Twitter over the last few weeks.  However, I'd never heard of Fanaply before and this mystery piqued my curiosity.  So, I confirmed what the algorithm anticipated and clicked on the attached links. 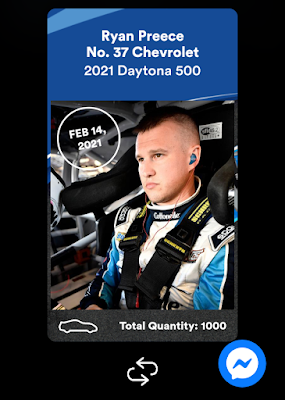 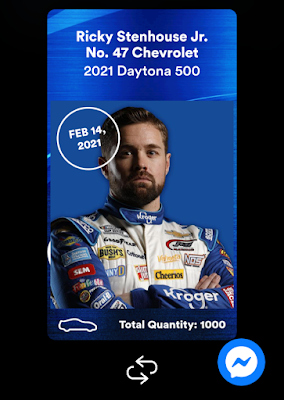 These are the two "digital collectibles" NOT cards (according to the Fanaply website - they're very specific) featuring the two drivers racing under the JTG Daughertry Racing in the Daytona 500 and the rest of the 2021 NASCAR season.  Ricky Stenhouse, Jr. is a sometimes competitive driver who has a couple wins so far in 10-year career and he is always tough to beat at the superspeedways, including Daytona.  Maybe I've pulled a card of this year's winner?  He'll start 21st this afternoon in the #47 Kroger Chevrolet Camaro ZL1.
Meanwhile, on the left is Stenhouse's junior teammate, Ryan Preece.  While Ricky has been around the Cup Series garage for a decade, Preece is entering what is only his third full-time season.  With a top-notch pedigree in the modified ranks, Ryan has yet to truly break through in Cup, with only five career finishes among the top ten.  That said, he's looked quick so far this month and will roll off the grid in the 11th position in the #37 Cottonelle Chevy.
So, now that I have these cards... errrrr... I mean collectibles, what do I do with them?  Apparently I can share them on social media, specifically through Facebook Messenger as evidenced by the big ol' blue icon in the bottom right of the screen.  Apparently, they're somehow limited to only 1,000 "copies" because, as their website subtly states: 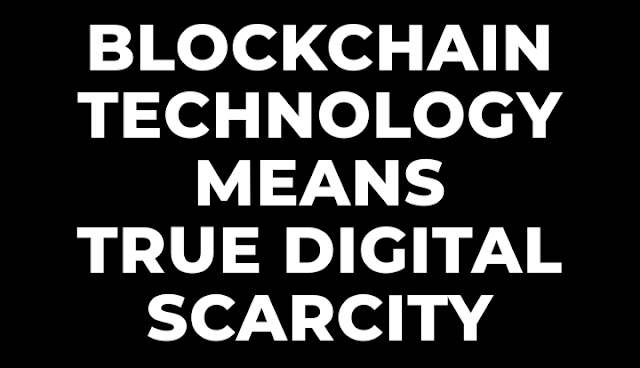 You also might have noticed in those screenshots that these collectible not-cards aren't just a picture.  To see more, all you have to due is flip them over... and by that, I mean click the arrows:

Thanks to Screencast-O-Matic for allowing me to turn these into .gifs so you can get the full effect.  Take that blockchain!  Honestly though, that crawling car effect is pretty dang cool.  Does the holder of the exclusive NASCAR license, Panini, have a line of digital trading cards?  If so, they need to "borrow" this idea.

Obviously, Fanaply is trying to jump on the bandwagon for the booming trading card market.  Actual adults are fighting off hoards of kids over Happy Meals in search of special Pokemon cards and sports card prices continue to skyrocket as stock bros look for new avenues to get their fix.  With so many exclusive licenses in the trading card market these days, an enterprising company has to get creative with how they nudge their foot in the door.  Digital "collectibles" - definitely not cards, guys - represent one such avenue into this suddenly lucrative industry.

Normally, Fanaply's true "groove" appears to by music-themed digital collectibles.  According to their website, they've been around for about a year and a half and offer an service through which "artists can create limited digital collectibles in the form of a digital card, so that fans can commemorate specific events, memories and milestones and be recognized for their support. This could be something like a card confirming the attendance of a specific event (think Travis Scott’s Fortnite concert), being the #1 listener to an artist on a specific day, or being one of the first hundred fans to watch a video premiere on YouTube."  As far as I can tell, these NASCAR releases are their first foray into the world of sports. 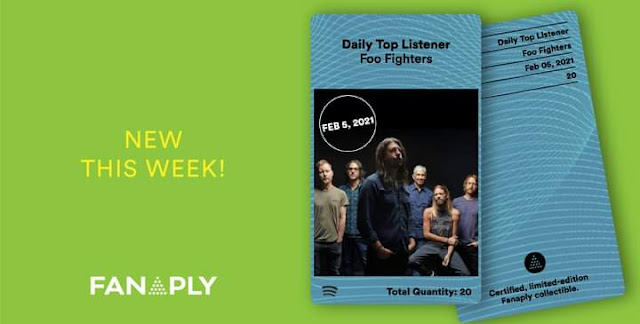 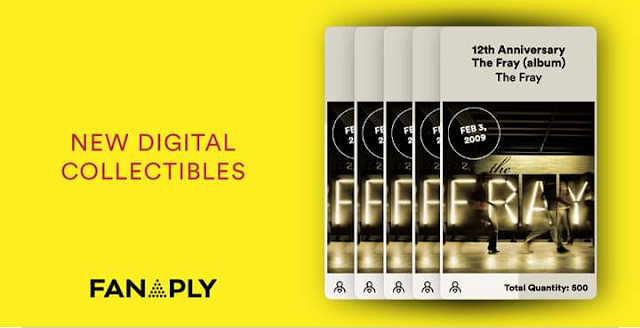 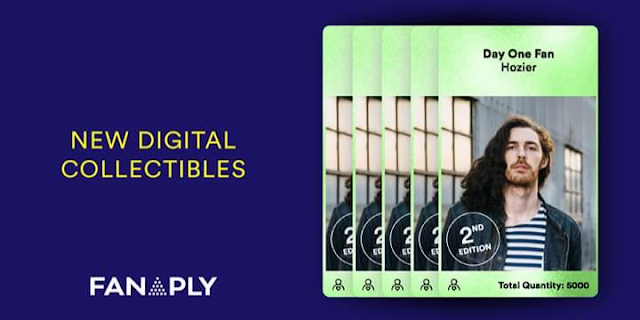 Above are some examples of their more musical offerings.  They have stuff from just about any genre you can think of, but I chose a few of my favorite artists because this is my blog, after all.

Like any other digital card, I still don't know what I'd do with these things, so I will not pursue any more of them.  But that's just me - if you are into this sort of thing, check Fanaply out by clicking this link.  My snarky sarcasm has been bleeding through this whole post, though just because digital cards are not for me doesn't mean I don't want Fanaply to succeed.  More options in this hobby is always better!  In the words of Sly Stone, "different strokes for different folks and so on and so on."

I wonder if Sly and the Family Stone have a Fanaply card?

Has anyone else ever heard of Fanaply?  This Facebook advertisement was the absolute first time I had ever even heard a passing mention of this company.  Does anyone out there on the blogosphere collect these digital cards or are now interested in doing so?   What are your feelings on digital pasteboards in general?  I encourage you to weigh in by visiting the comment section below - I'd love to hear what you think! 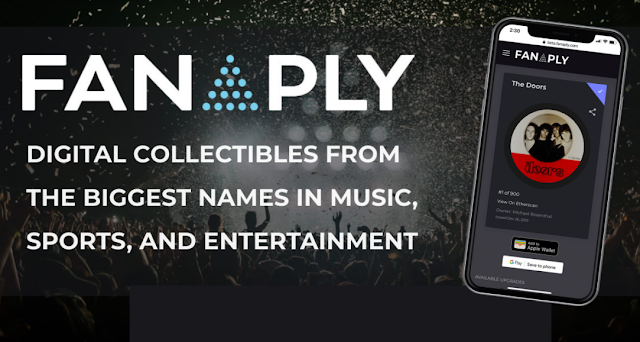 In the meantime, digital trading cards don't officially count towards my roster collections; so, the slot for Ryan Preece in my all-time NASCAR drive binder remains unfilled.  It's pretty tough to put a .gif in a Ultra Pro page.... we just don't have the technology yet.  Although, I don't think blockchain could stop me from printing out my Fanaply single and turning the digital into the physical.  On the other hand, I already have a Stenhouse card from his days at Roush Racing, so I don't have to worry there.

And to think, all of this came out of scrolling Facebook before sunrise.  I guess Facebook might ruin democracies, but at least it helps with blogging and collecting?

Finally, it's time to wrap this post up.  The Daytona 500 is just about to kick off and I want to give this race my full focus.  I'll be rooting hard for the aforementioned 23XI Racing and their driver, Bubba Wallace, who has quickly become my favorite.  I'd love for him to win one of motorsports most important races and cause the less-desirable element of the NASCAR fan base into a absolute tizzy.  But, if it can't be him, I guess I'll lend my support to the faces found on my new Fanaply digital collectibles.