The Most Wanted Longshot

Yesterday, I heaped massive amounts of praise upon our good friend, Jason German (the creative force behind Hoarding Cardboard), for the generous South Bend Cubs team set he went out of his way to purchase and send to my humble home.  As kind as this gesture was, I still wasn't truly giving him full credit, because I was actually holding something back for it's own post.  That's right, Mr. German also "threw in" a pasteboard from my Most Wanted list.  As if acquiring and mailing a complete set of treasured minor league cards my way wasn't enough of a good deed...

Have I mentioned how awesome this guy is?

Anyway, to be completely honest, this card might not seem like much to most people.  In fact, even a great majority of us niche-frenzied card bloggers might find this particular single to be nothing special.  It's not a hit of any sort, lacking signatures, relics, serial numbering, or parallel designation.  Honestly, as far as base cards go, it's quite unassuming and, dare I say, even a tad but ugly.  Nevertheless, this card brings a big ol' smile to my face, all the same: 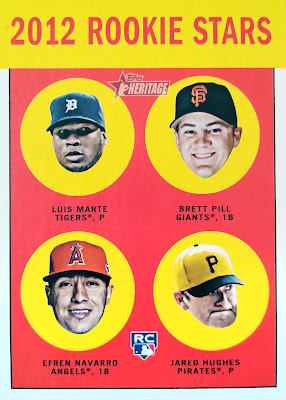 That's right, it's a multi-player rookie from the 2012 edition of Topps Heritage, which apes the design from the old bubblegum company's 1963 Flagship design.  The disembodied, floating head rooks of the day aren't for everybody - including me - but, they don't bother me nearly as much as they normally would due to the circumstances surrounding this cardboard rectangle.

You see, one of these bright-eyed and bushy-tailed freshmen would make their only Major League Baseball card appearance here.  Additionally, that same player would eventually go on to suit up for my beloved Chicago Cubs.  If you've been reading this blog for any significant length of time, you should know why this would pique my interest.  After all, my card collecting habit is nearly completely based around my treasured Cubs All-Time Roster Collection, a tome in which I endeavor to collect at least one card of each athlete to don Cubbie Blue.  With this card being the only MLB option for the ballplayer in question, it shouldn't take a college degree to figure out why it has sat on my Most Wanted List for the past two years.  But, which one of the four is the guy that I've been chasing?  Do you remember any of these guys trying on blue pinstripes?

Quick - before you scroll down - take a guess.  No cheating!!

Alright, now let's find out if you were correct.  Watch this .gif until it comes to a complete stop:

So, who guessed correctly??  Be honest now!  Feel free to brag about your triumph in the comment section at the end of this post.  Or, if you knew without even waiting until the end of the .gif, please be sure to let everyone know about your superior knowledge of Cubs roster machinations and claim your Wrigley trivia crown.

Efren Navarro played for parts of six seasons in the Major Leagues, from 2011-2018... ironically enough, 2012 was not one of those seasons.  All told, while Navarro spent most of his modest time with Angels (2011-15: 130 games, .246/.303./.324) and also cameo'ed with the Detroit Tigers and, of course, the Cubs, the fact that he even made the Major Leagues at all is a minor miracle.  You see, Efren was drafted in the 50th round of the 2007 draft.  That's not a typo, folks, he was taken so late in the draft that only three picks remained on the board whatsoever after his name was called.  They literally almost ran out of players to pick before LA finally took a flyer Efren.  Hell, that's ten rounds later than even the MLD draft even goes these days.  Wowza.


As for Navarro's Cubs connections, in April of 2018, Anthony Rizzo went down with a back injury and the club called upon the off-season minor league signing from AAA.  With Rizz requiring only the minimal, 10-day stay, Mr. Navarro only got into four games, scratching out one hit and four K's in six AB's.  Afterwards, the 32-year old was returned to Iowa, where he stayed until late May, until he was DFA'ed to make room for the "Yu Darvish Whisperer," Chris Gimenez (you'll see that name on Wrigley Roster Jenga again in the next few days).  This marked the end of Navarro's unceremonious Cubs career.

While that remains Efren's last Major League action, it did not mark the end of his professional career.  Since that eventual release, the longshot has taken his talents to Japan, where he has played part-time for the Hanshin Tigers.  Unfortunately, his stat line in the land of the rising sun looks very similar to the underwhelming numbers that he produced stateside - .264/.326/.354 - so, a return to the show does not appear imminent.  That being said, Efren is certainly no stranger to beating long odds!

And that is the tale of Efren Navarro - he destroyed the odds and rose all the up way from the 50th round to the Major Leagues, cameo'ed with Cubs, and continues to pursue his dream.  All in all, he's quite the inspirational figure.

Now, this unsung baseball hero has finally been inducted into my hallowed Cubs All-Time Roster Collection.  Efren's lone Major League card might seem like an easy pickup, considering it's unassuming, base classification and the relative insignificance of the players depicted on it's face and the many eBay listings for the pasteboard only reinforces that theory.  However, my penny-pinching ways refuse to let me pay a $1+ for the basic card, plus shipping fees.  Furthermore, my local card shops don't bust Heritage; so, my hands have been tied for a while.

Barring some incredibly unforeseen circumstances, Mr. German's gift will remain in my big ass binder until the end of time.  After all, it shouldn't come as any surprise that Efren Navarro never appeared on a piece of Cubs cardboard; in fact, I'm fairly certain that he didn't even appear in the 2018 Iowa Cubs team issued set.  That is, except the super legit custom Topps Now card that I whipped up at the time to commemorate his call to Chicago, which I've recently noticed is one of the top hits on Google Images when one searches "Efren Navarro Cubs." 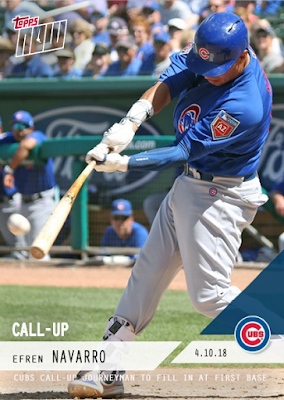 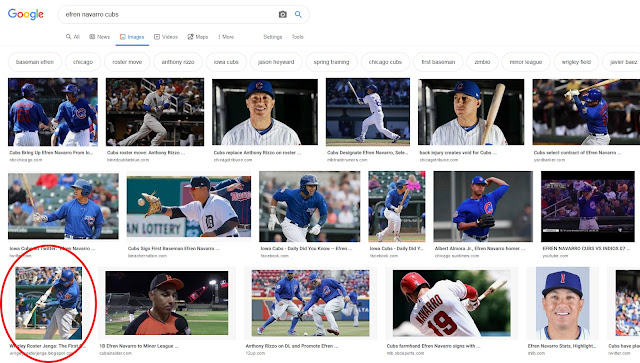 With only other franchise's bush league cards available, there is no threat to the 2012 Heritage rookie card being usurped.  Adding in the fact that the long-pursued piece of pasteboard came as a gift from a blogging buddy and, thusly, has intrinsic sentimental value besides the value it holds to my collection, it would have been nigh impossible to take down anyway.  Thank you, Jason, for knocking one of the most frustrating needs off of the ol' Most Wanted list.  Once again, I'll be sure to try and return the favor with an envelope chock full of Reds or Shawn Green/Buster Posey/Matt Mantei cards for your PC's.  I don't know that it's even possible to properly return the favor; it's a longshot, but I'm going to give it my best shot.

If we've learned anything from Efren Navarro, sometimes the longshot pays off.