The other day, I waxed more poetically about a random 2012 Heritage single than had ever been done before.  Today, it's going to be more the same as I delve into the story behind another seemingly unassuming base card that is disproportionately significant to me and to my Cubs All-Time Roster Collection.  This time, we turn back the clocks just a touch - from 2012 to 2011 - and we turn our focus to Topps' Flagship release, rather than Heritage.

Back in 2011, a back-up catcher and super utility player made his debut with the Seattle Mariners, after signing with the club as a free agent the winter before.  Would he go on to do great things in the Emerald City?  To be perfectly blunt, no.  In fact, the entirety of his 10-year career would be spent as a second or third string backstop, riding the shuttle between AAA and the Majors.  Nevertheless, that 2011 season was important because it netted the receiver one of the only two MLB trading cards that he would ever be honored with. 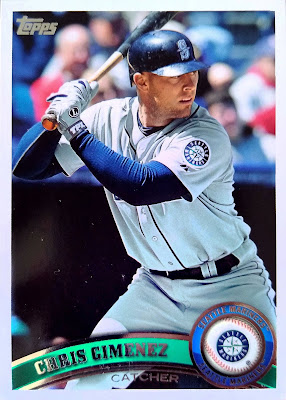 Although I said Flagship, Chris Gimenez technically appears in Update; that said, the sentiment remains the same.

The veteran player played with six tams across a decade in the show and the card you see above represents exactly half of his cardboard footprint.  One of those six teams was obviously the Mariners; however, more importantly (to me, anyway), another one of those half dozen clubs was the Cubs.  Thus, I obviously needed one of those two pasteboards for my Cubs All-Time Roster Collection binder and - spoiler alert - I came across the Update single first.  Of course, it sure wasn't easy to come across... more on that later.

In 2018, Theo Epstein and crew signed Chris to a minor league contract and invited him to Spring Training, ostensibly to audition for the AAA-Iowa backstop role and serve as the next man up should an injury occur to Willson Contreras or Victor Caratini.  I say ostensibly because many fans and pundits posited that was another reason why the front office had pounced on the former Texas Ranger and it had to do with a former Lone Star teammate:  Yu Darvish. 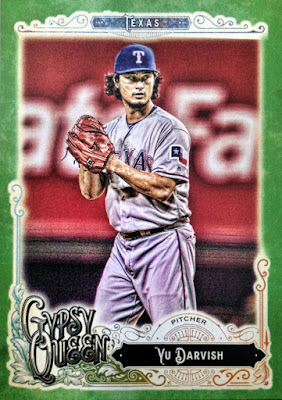 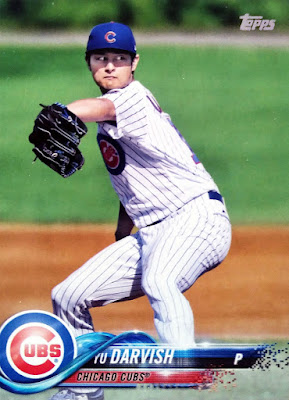 The Cubs were known to be wooing the free agent during the winter of 2017-18 and Chicago faithful were absolutely drooling over the thought.  At the time, it seemed like lining Darvish up with Jon Lester, Kyle Hendricks, and Jose Quintana would create one of the deadliest rotations of all-time and the Cubs would become an unstoppable force with their already potent offense.  Coming off of two NLCS appearances and a World Series Championship, the Cubs were a Darvish away from a dynasty.

Of course, that winter was the first under the current labor agreement and the first "free agent freeze out" period, with many of the marquee names waiting until February or later to put pen to paper.  Thus, when the Northsiders inked Chris Gimenez, to a MiLB pact in late January - after nearly three full months of Darvish speculation - news hungry fans let their imaginations run wild and Twitter erupted into a frenzy.  Suddenly, because Gimenez caught 12 games pitched by Yu with Texas, it was all but a done deal that the pitcher would follow his former, sort of personal catcher to the Windy City.  Full proof thinking, right?

Well, spoiler alert, Darvish did eventually bring his talents to Wrigley Field.  Although that first year was a massive dud for the hurler, 2019 marked a return to form.  In fact, Yu was pretty much the only stable presence in the Cubs' starting rotation last year and it's scary to think about what it would look like in 2020 without a healthy Darvish.  Do we have a third-string catcher to thank for this rotation's rock?  Is Darvish in Chicago because Chris Gimenez whispered into his ear and begged Yu to make the journey to the Second City by his side?

Meanwhile, back at the ranch, Chris Gimenez seems to be playing second fiddle in a post dedicated to his own baseball card.  Sorry, Chris - I can't help it.  Thanks to that chilly, Midwestern winter where the only way to stay warm was the crowd around the "hot stove" and wait to see if Yu darvish saw his shadow, I automatically think of Chris battery-mate whenever I see his name.  It's unfair, but the human brain is a confounding thing.

Anyway, as for Chris, his Cubs career was exactly what you would expect out of a third-string catcher.  Called up at the end of May, he had an opt-out clause in his contract that would have tossed him back out onto the open market.  With Willson Contreras entrenched in the starter's role, Victor Caratini was farmed out for more consistent playing time and development in order to make room on the roster.  In fact, to make room on the 40-man, Efren Navarro was designated for assignment, a fact I only bring up because we discussed Efren, in depth, in my last post.

As for Chris' performance on the field, the only word that comes to mind is anemic.  All told, he posted a .143/.219/.143 line in 32 PA's scattered across 12 games.  Granted, you don't expect much offense out of your back-up catcher, but yikes.  As for the Darvish hoopla, Chris only caught him once, making all of that previous rabid speculation seem like a lot of hubbub over nothing... which it likely was anyway. 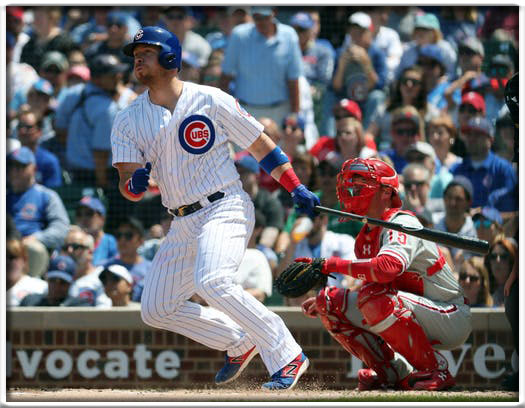 Chris takes a cut against the Phillies, image courtesy of the Associated Press.

To make matters worse, Chris got himself in some hot water too, for some negative comments made to the press.  The target of his barbs was, ironically enough Yu Darvish.  With the should-be ace already drawing the ire of the Chicago fans and media due to his lackluster, injury-ridden campaign, Gimenez went out and fanned the flames.  As reported by the Chicago Sun-Times:

“I think he thinks that Chicago hates him for going on the DL a couple of times,” Gimenez said. “I’ve tried to portray to him, ‘Listen, they’re going to love you when we get to October and we’re doing the things that we all want to do here, you’re the main reason we’re doing it and we’re riding you all the way through it.
“So don’t worry about them getting mad at you on Twitter in May. Worry about when we get to September, October and they’re chanting your name.”

To me, it feels like Chris was trying to light a fire under his teammate and had the best of intentions, but his comments came off making Darvish look weak-willed and reluctant.   You can draw your own conclusions, but the normally tight-lipped Theo Epstein publicly chastised Gimenez's comments and Chris found himself out-righted to Iowa a few days later.  Shortly thereafter, he was swapped to the Minnesota - in exchange for another third-string catcher, Bobby Wilson - where he wrapped up the season and his Major League career.  It wasn't the best note to close his playing career on, but sometimes that's just how the cookie crumbles.

Quick sidebar: Bobby Wilson is another interesting footnote in recent Cubs history.  When he was acquired by the Cubbies on August 30th, 2018, he was dealing with a nagging foot injury, but it was expected he'd be good to go in short order.  However, Wilson would not be added to the active roster until the Cubs' final series of the season and, ultimately, did nothing but ride the pine.  As such, he is the most recent "phantom" player in team history.  By that, I mean that although Bobby Wilson was officially on the active roster, he is not recognized as having played with the franchise because he never saw game action.  It's a weird little quirk in MLB rostering rules and means that I was forced to pull him from my CATRC tome. 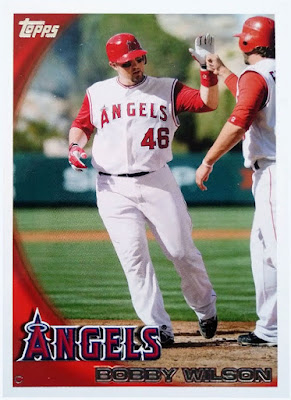 Back to the subject at hand... man, this is going to sound terrible, but it seems like everyone surrounding Chris' story is more interesting than he is (Navarro, Darvish, Wilson, etc.).  Anywho, Chris is still involved in the Major League game and serves on Dave Roberts' coaching staff with the Dodgers.  I'm sure bagging on Yu Darvish's mental fortitude is a much more forgivable offense in Los Angeles than it is Chicago.

Nearly a year and a half after Gimenez was added to the Cubs' roster, I've finally added him to my Cubs All-Time Roster Collection and that is sort of strange.  Now, it's not a surprise that the career back-up backstop doesn't have much cardboard, despite a relatively lengthy career - reserve players rarely receive any love from the monopolizing ol' bubblegum company.  The quirky part of the equation was how tough it was to come by this guys's cards on the secondhand market.

For some reason, the only 2011 Topps Update single my LCS was out of stock for was Chris' sophomore card and copies were a little more scarce online than expected.  For instance, as I type this, there isn't a single one available on COMC.  Meanwhile, his only other MLB option - a 2009 Heritage rookie - was short-printed and you know what pitfalls that brings.  Thankfully, a dollar listing with free shipping popped up on eBay a few weeks back and I pulled the trigger.  An overpay for sure, but the peace of mind in crossing Chris Gimenez off of my "most wanted" list was worth the modest price.  After all, I'd much rather focus my collecting cross-hairs on vintage baseballers than modern journeymen. 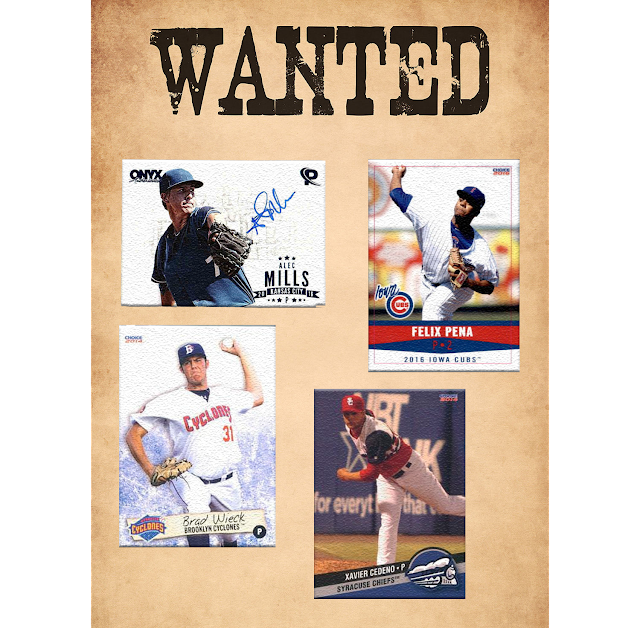 With the previously mentioned Efren Navarro and, now, Gimenez being acquired, all I need is a Felix Pena, an Alec Mills, an Xavier Cedeno, and a Brad Wieck and I'll be all caught up through 1977.  So, if anyone has a lead on any of those four gentlemen, please feel free to share.

In the meantime, I'm just thankful to finally add Chris Gimenez to my CATRC and that you took the time to read all of the nearly 2,000 words I managed to vomit about such a trivial feat.  Thanks for dropping by!
Posted by Tony Burbs at 11/13/2019 09:42:00 AM