Comin' Up Around the Bend 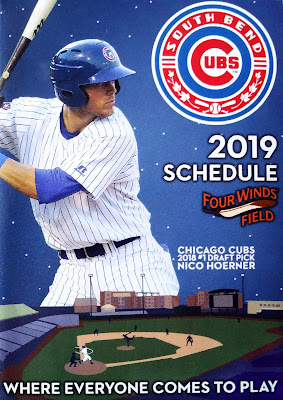 Back in August, friend of Wrigley Roster Jenga and accomplished blogger himself, Jason German of Hoarding Cardboard fame, took a little trip.  My fellow Midwesterner decided to make the journey to South Bend, IN to take in the local sporting scene.  While most people might expect any such centered trip to revolve around a "modest" secondary school by the name of Notre Dame and their Fighting Irish sports programs, German was not in town to see "Touchdown Jesus." You see, Mr. German made the drive to see some baseball and South Bend just so happens to play host to the Low-A affiliate of the Chicago Cubs - the cleverly named South Bend Cubs.

Apparently, Jason works nearby and decided to make a stopover at Four Winds Field after punching out for the day.  Being the generous soul he is, he even contacted me beforehand to ask if I wanted anything from their souvenir shop because he knows I like my minor league team sets.  What a guy, right?

Of course, I took him up on his offer to purchase a 2019 team set so that I might be more prepared for future call-ups to my Cubs All-Time Roster Collection.  South Bend is just far enough away from my south suburban home that it would require a fair amount of planning to make the four hour round-trip trek there on my own.  So, chances of me picking one of these sets or the pocket schedule you see above (that Jason threw in as a bonus) were almost nil. 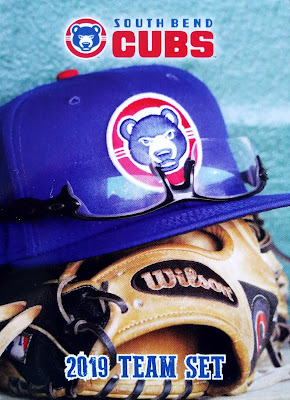 The lucky guy even happened to time his visit with 2016 World Series MVP Ben Zobrist's first rehab appearance of the year, as he resumed his season after a long leave of absence.  I think that was the baseball gods' way of rewarding Jason's selfless generosity.

Obviously, Zob's was not included on the 2019 South Bend Cubs card set - it was made up solely of members of the eventual Midwest League Champions who were not on rehab assignment.  Now, the Cubs farm system has been famously gutted over the past few years as Theo and Co. desperately try to extend their competitive window; however, the chain isn't completely devoid of talent.  As evidenced by the championship banner now flying over Four Winds Field, many of their best prospects reside in the lower levels of the farm, South Bend included.  With that in mind, maybe I'll be able to sell some of these cards in a few years to pay off my student loans.

Developing homegrown pitching has been an area of concern for nearly a decade now, but there's a pair of arms hanging around the Hoosier State who could flip that narrative in a few years: 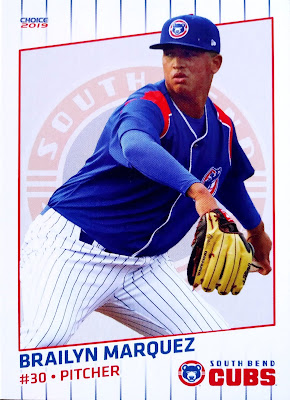 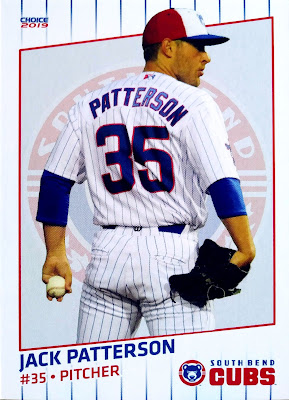 Brailyn Marquez exploded onto the scene in 2019, ultimately being named the Minor League Player of the Year.  He posted 102 strikeouts in just 77.1 innings at South Bend and then a 1.71 ERA with 26 strikeouts over five starts when promoted to High-A.  This eye-popping performance came largely on the strength of a triple-digit fastball to go along with plus changeup.  Brailyn is expected to start 2020 at AA and could very well be on the fast track to the Bigs, a September call-up might even be in play.  Thanks to Jason, I'm now prepared for such an ascension.

Meanwhile, Jack Patterson has already made it up to AA but, like Marquez, started last season with South Bend.  The lefty made himself known to talent evaluators on the heels of a 24.1 inning scoreless innings streak in June/July.  Who knows, maybe Marquez and Patterson will be fronting the Cubs rotation in 2021? 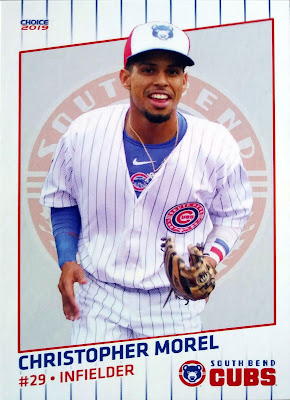 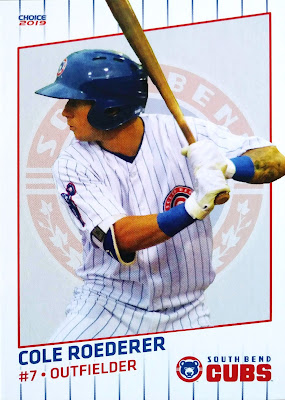 Marquez is the highest-ranked prospect in this cello pack - checking in at number four, according to MLB Pipeline.  Meanwhile, Cole Roederer is the second-highest (and highest ranked position prospect) ranked pre-rookie found within.  The outfielder was a much ballyhooed, second-round draft pick in 2018, who didn't play much that season due to a shoulder injury suffered during his senior year of high school.  Most of 2019 was a disappointing grind, though he was able to close out with a strong August.  In the end, his star power was out-shined by the fellow seen next to him here.

Christopher Morel posted a .284/.320/.467 slash line in 2019 and was integral part of the SB offense.  This was somewhat of surprise, as the international signing was something of a wild card when he was first inked in 2017.  His lean build - he’s listed at 6-0, 140 pounds - caused him to go under the radar of many scouts and this is only his first year in full-season baseball.  Chris is certainly a guy to watch over the next few seasons. 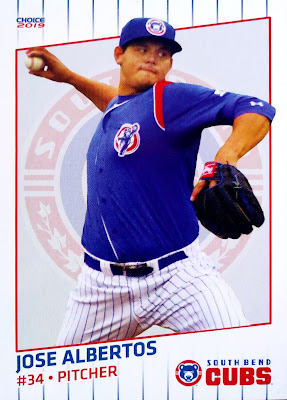 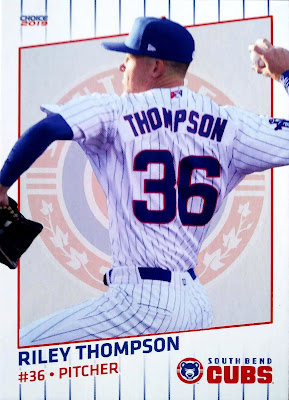 Next up, we have another pair of arms with Big League potential.  Jose Albertos' star has faded considerably since the start of the 2018 season.   A bout with the yips in 2018 (65 BB's in just 30.1 innings) led to an astoundingly bad 14.84 ERA and, while noticeably better, a 5.02 ERA in just 14.1 frames (13 BB's) this year did little to assuage fears.  That said, Jose is still only 20 years old and possesses a 95-mph fastball... this lottery ticket hasn't been completely scratched off yet.

As for Riley Thompson, he was in the running for Cubs Minor League Pitcher of the Year honors for most of the 2019 campaign and ended the season with a 3.06 ERA in 94 innings and just 31 walks.  He faded out down the stretch, but still closed on a high note, with 10 K's in just five IP during the pennant clinching game.  Thompson and his high-velocity fastball and devastating curveball have been described as nearly Major League ready.  In short, he might be on an accelerated path to the Show. 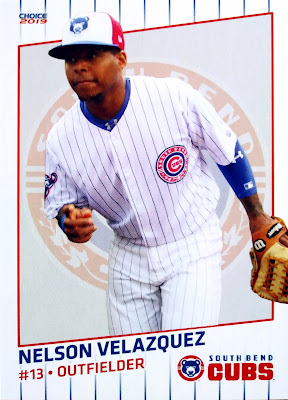 Lastly, we have the man who (with Morel) carried the offense for most of the year for the Bend, Nelson Velazquez.  The fifth-round draft pick from 2017 posted managed to turn raw strength and bat speed into in-game power and posted a .286/.388/.424 batting line, further solidifying his prospect pedigree.  Hopefully, Nelson continues to blossom with an inevitable promotion to High-A come spring.

There we have the highlights from the 2019 South Bend Cubs factory team set, as produced by Choice.  Here's hoping that at least one of these rubes eventually makes it up to the Bigs and to my Cubs All-Time Roster Collection.

Now, we've discussed, at length, the players depicted on the cards, but not the cards themselves.  One of my favorite parts of analyzing a MiLB team set is to determine what major sets influenced their designs.  It seems as though the artful minds behind Choice and their peers at Grandstand draw direct inspiration from the likes of Topps, Upper Deck, Fleer, etc.  As for the set that Jason has gifted me with, it appears as though Choice went with the latter, this time: 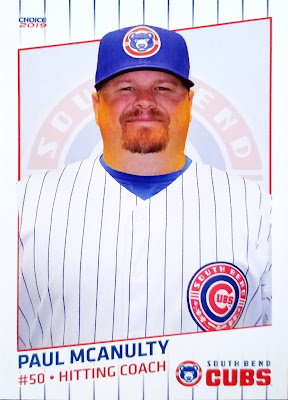 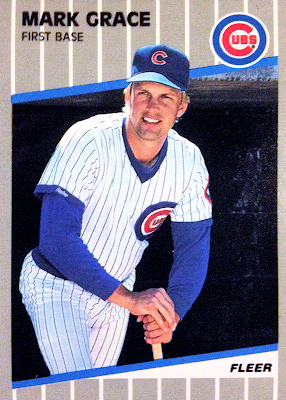 As you can see, these 2019 cards are little more than rehashes of a fairly well-remembered design from 30 years prior.  That being stated, the only reason any of us really remembers 1989 Fleer is due to the iconic "f*ck face" Billy Ripken error and all of it's various corrections.  The actual design of the cards is rather dull and drab with it's over reliance on the most boring of all colors: gray.

All in all, I'd say Choice's revamp is the superior take on the layout.  Swapping gray for white, granted, is a lateral move; but, incorporating team colors in the framing, text, and design elements (rather than just the picture frame) adds some subtle pop.  Additionally, moving the team logo from the corner to a more prominent place in the background of the player photograph is a nice touch, even if Paul McAnulty - former Padre and Angel outfielder and current SB Cubs hitting coach - makes a better wall than a window.

Overall, if I were to have to chose between the two, I'd say that Choice is the clear "choice."  What say you? 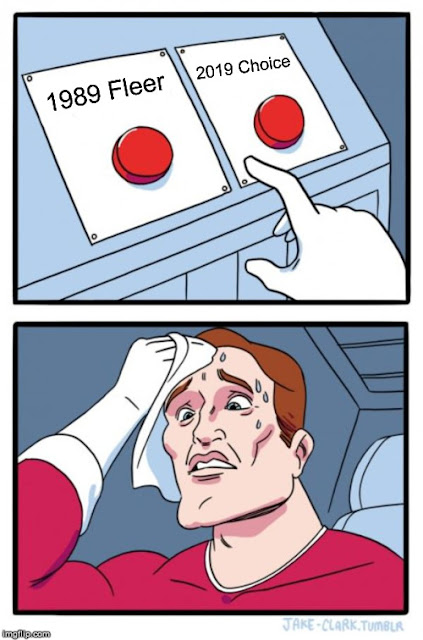 At any rate, my sincere thanks go out to Jason for thinking of me when planning a trip to the ballpark and for sending me this fun set of cards.  Better yet, I haven't mentioned this yet, but Mr. German also included a special bonus card - one of my most targeted needs, at that - along with the minor league team set.  That, however, will get a dedicated post all to itself, as this rambling stream of consciousness is already flowing a bit too long.

Moral of the story, Jason = awesome.  I greatly appreciate your generosity, Jason, and - now that I'm back from my self-imposed baseball brain break - I'll be sure to fire back some Reds or Shawn Green/Buster Posey/Matt Mantei cards for your PC's.  Sorry for the wait!

Here's hoping that some of these cards eventually end up in my CATRC binder.  Lord knows the Cubs' pitching rotation could use a fully-formed Jack Patterson or Riley Thompson right now, with the departure of Cole Hamels, Jose Quintana's inconsistency, and the continuing decline of Jon Lester.  Brailyn would be better, but he's not quite as cooked.

Anywho, we shall see what happens and that's half the fun of minor league cards!