The Cubs' bullpen has been... not so great for the majority of 2019.  As of this morning, the Chicago relief corps ranks fourth in the Major Leagues in blown saves, with 21 mishaps, and are just two away from the Padres in leading all of baseball.  It's been one of many weak spots on a flawed, but surprisingly competitive roster, besides the wildly inconsistent offense, off the field drama, and artificially strained budget.

Besides effectiveness on the diamond, health has been a bit of an issue, as well.  Just yesterday, Craig Kimbrel - the high-priced closer who was supposed to save the pen - was placed on the 10-Day injured list due to some knee problems, a place where the main setup man, Pedro Strop, already resides as he deal with neck pain.  To make things worse, Brandon Kintzler, who has probably been the most consistent and reliable fireman for the Cubs this season and de facto closer, was seen wincing in obvious discomfort after coming off of the mound last night, making it seem likely that yet another high-leverage arm will be unavailable, for at least a few days.  In short, there's going to be some shuffling in the bullpen over the next few days. 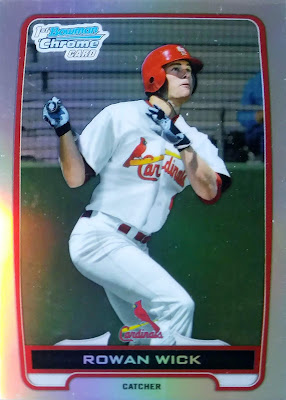 Acquired in a minor trade with San Diego over the winter (for minor leaguer, Jason Vosler), Rowan Wick was pressed into service on the Cubs' Major League roster in a previous rash of injuries.  So far, all he's done is produce, posting a 1.98 ERA in 13.2 innings with 15 K's against just 7 BB's, and throw gas (topping out at 98 mph).  In fact, rather than send him back to the minors during a roster jam, Theo decided to admit defeat and cut bait with high profile, off-season signing, Brad Brach.  Obviously, the front office thinks quite highly of Rowan's work thus far and, with this current rash of injuries, it seems likely that he'll now be needed for some high-leverage innings.

But, you might be asking yourself, if Rowan Wick is this blossoming bullpen arm, why is he listed as a catcher on the card above?  Well, the former Cardinals farmhand spent the first four years of his professional career on the other side of the dish. 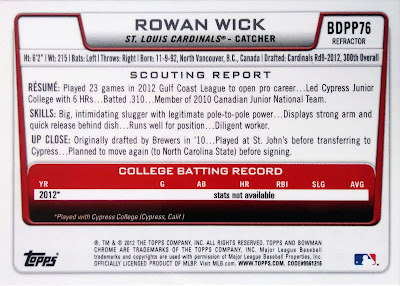 Drafted in the 9th round of the 2012 draft by the Cubs' arch rivals, as a catcher, Rowan Wick could not hit worth a lick.  In those first four seasons, Rowan never rose above High A ball and served as  little more than depth, mostly playing the backup backstop.  However, his arm drew rave reviews throughout the organization, as the back of this 2012 Bowman Draft Prospects Refractor indicates: 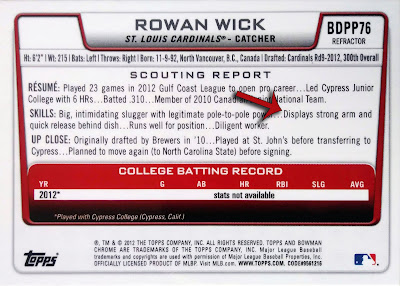 With that in mind, after a brief experiment towards the end of 2015, Rowan converted to mound duty full-time for 2016.  After some bumps and bruises in the high minors with the Red Bird chain, he was allowed to be claimed on waivers by the Padres in February of 2018 and he would make his debut with the Friars that summer and catch the eyes of the Cubs' front office.

Speaking of eye-catching, this refractor that I was able to snag for just 35 cents off of EBay is absolutely dazzling.  I don't have many such shiny cards in my collection, as I generally just grab the cheapest base cards available as guys are acquired by the Big League club; however, this deal was simply too good to pass up.  I mean, just look at how lovely this card looks under the light: 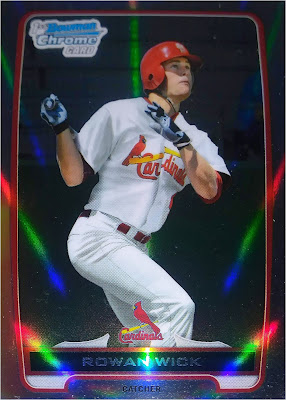 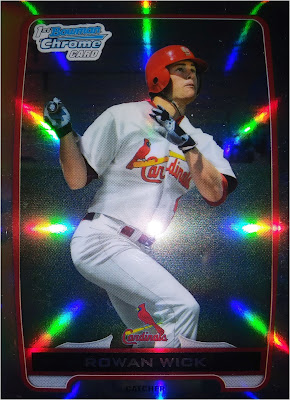 Man, a Cardinals card has never looked so good!

I also get a kick out of the fact that this now Cubs pitcher is shown at the plate and listed as a catcher.  This dichotomy makes for a quirky new addition to my Cubs All-Time Roster Collection.  Although, it might not be resting in that binder for all that long, seeing as the reliever appears to becoming a major part of the Cubs' bullpen.  I can see him earning his first bonafide Major League card (he only has Bowmans and MiLB team issues to his name, thus far) soon, either by showing up in Update (they love to jam rookies in there) or being included in the ever-growing Topps Total checklist.  As for the latter option, the stated goal is to showcase as much of the 2019 rosters as possible, so if Rowan's usage spikes in the last two months of the regular season, it would "totally" make sense.  In the meantime, this refractor will hold down the spot quite nicely.

While we wait and see, I've gone ahead and whipped up my own take on Total for Rowan: 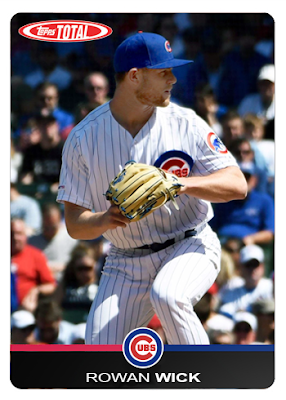 At any rate, welcome to the CATRC, Rowan Wick, and to the inner circle of the bullpen.  Here's hoping that the results continue to impress and you help to solidify that leaky and creaky facet of the roster!..