I don't know about you, but my wife and I have been trying to cut down on pop.  I'm training for the Chicago Marathon and, as such, my better half and I are both attempting to be more health conscious.  The sugar content in pop is heavy enough that one can lose 5-10 pounds alone from cutting out Coca-Cola, Pepsi, and crew and, lord knows, I don't need to be carrying any extra weight around when I'm traversing 26 miles around the streets of the Windy City.  However, eliminating the carbonated treats from our diets has been easier said than done.

Water, juice, and tea have been the beverages of choice in our household for a while now (in fact, we don't even keep soda in the home at all); however, sometimes, we just want a drink with both some flavor and a little bit of fizz.  As such, LaCroix sparkling water has been kept on hand, just in case we feel ourselves jonesing for a can of RC.

Of course, the thing about LeCroix is that it's not pop... it's just a stand-in.  While it does quench the thirst and urge for the sugary substance for a while, in the end, it doesn't completely eliminate the craving for a Coke.  LeCroix is just a temporary substitute that helps fill in when needed - it's not the final solution.  Speaking of which.... 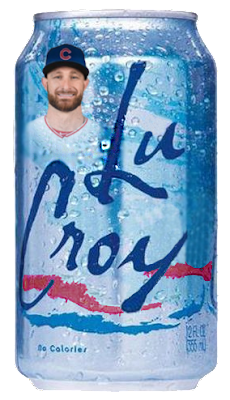 Jonathan LeCroix... ermmmm... I mean, Jonathan Lucroy is now a Cub and, boy oh boy, does this sentence feel strange to type.  The former two-time All-Star absolutely punished the North Siders as a member of the divisional rival Brewers for many years during the first half of this decade and now the catcher is one of them.  Weird... but, that's baseball.

Anyway, much like the beverage that sounds so similar to his surname, Lucroy is a temporary substitute, a fill-in for someone who we Cubs fans would much rather have behind the dish, right now.  Just days after the trading deadline, Willson Contreras came up lame while trying to beat out a grounder.  As it turned out, the All-Star had pulled his hamstring and quickly found himself on the IL, where he will reside for at least the next month.  Suddenly, although the market had officially closed, the Cubs found themselves in need of a capable replacement and they would been unable to pull a straight trade for help.  This was made all the more annoying by the fact that they had just traded Martin Maldonado, their briefly tenured third-stringer, on the day of the deadline.  All in all, it felt like a karmic gut punch.

Luckily for Theo and crew, the Angels had just happened to DFA Jonathan Lucroy and he quickly cleared waivers, meaning that a well-respected signal-caller just so happened to hit the free agent market at the very instance that they needed one.  Karmic balance had been restored! 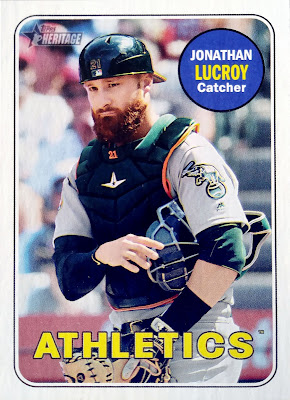 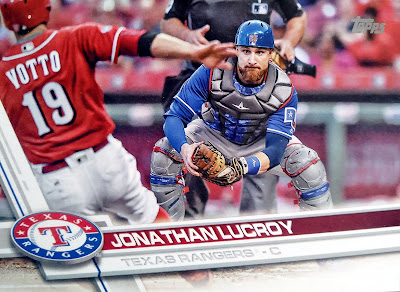 Of course, Jonathan Lucroy had been DFA'ed for a reason - his halcyon days have long since passed him by.  Since being traded away from the Brew Crew as a free agent in the middle of the 2016 season, his bat has grown less and less potent.  In that time, he's bounced around from the Rangers, to the Rockies, to the A's, and to the Angels while his WAR has slowly decreased from his peak of 5.4 in 2014 to 0.4 in 2018 and 0.1 in 2019, thus far.  At the same time, his once elite pitch-framing skills have diminished to slightly below average.  All told, he's definitely been trending in the wrong direction for a couple of years now.

Furthermore, Jonathan may very well be damaged goods.  Only a month ago, Lucroy was forced out of action by a controversial play at the plate in which he was carted off of the field, concussed and with a broken nose:


ICYMI Play in the 8th when Jake Marisnick was initially called safe following a collision w/ Jonathan Lucroy at the plate. After the play was reviewed Jake was ruled out. @LAAngelsPR said Lucroy was taken to a local hospital to be evaluated for a possible concusion &nose fracture pic.twitter.com/I8fM0ZBANH
— Mark Berman (@MarkBermanFox26) July 7, 2019

All this being know, the risk is absolutely worth taking.  Seeing as he was DFA'ed and cleared waivers, the cash-strapped Cubs are only responsible for paying Lucroy a prorated cut of the league minimum, with the Angels on the hook for the rest of his contract.  Furthermore, a team in the thick of a tight pennant race needs all the catching depth it can have and, as good as Victor Caratini has been, they still need someone else to help shoulder the load.  Why not see if Jonathan has something left in the tank - maybe this move to a contender will spark something in the gut of the 33-year old? 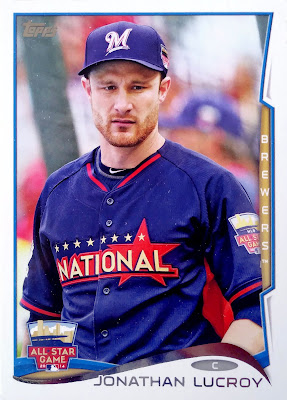 Meanwhile, with Jonathan officially making his Cubs debut last night, that meant that my Cubs All-Time Roster Collection needed updating.  Luckily, since Lucroy was a multiple time All-Star - as illustrated by the 2014 Update single you see above - for a small market team, that meant he showed up in a lot of baseball card products throughout this decade.  With that being the case, I was able to pull several singles from my trade stacks for potential inclusion, besides the cards you've already seen in this post: 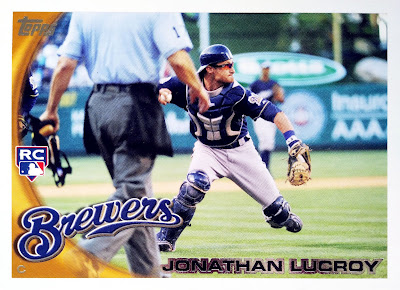 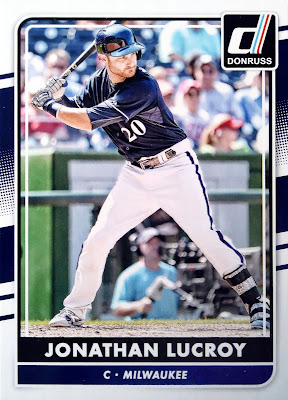 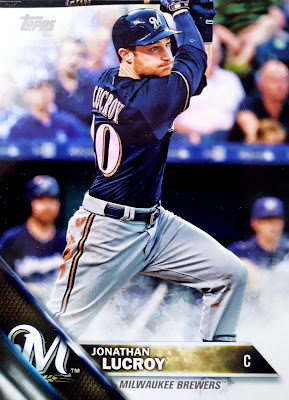 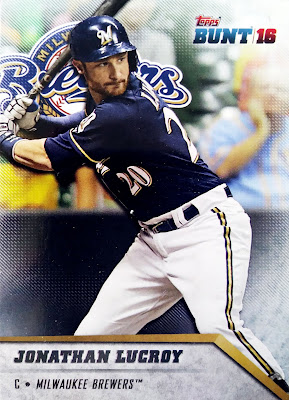 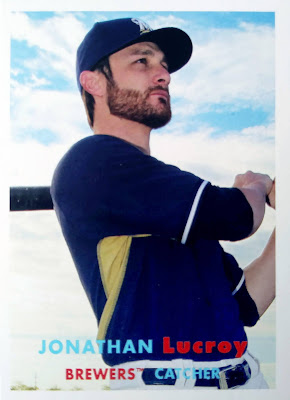 As you can see, I have a fair smattering of cards from his time with Milwaukee.  I think that my favorite of this bunch is the 2016 Bunt single; of course, in this I am a touch biased as that particular product features one of my most preferred card designs of all-time.  What can I say?  I am a sucker for incorporating team logos into the design layout.  However, one could also make a strong argument for including the Panini Donruss card in my CATRC due to it's lack of logos.  Due to that characteristic, one could cross their eyes and squint and it would look almost like a Cubs card!

After examining all of the options, I think I'm going to have to go with the Bunt, but I would also love to hear your opinions.  Do you think that the action shot found on his 2010 rookie is the best way to go?  Perhaps you're a fan of the "play at the plate" shot from the 2017 Rangers card seen earlier in this write-up?  Please feel free to weigh-in on the matter in the comment section below!

In the meantime, here's hoping that Jonathan Lucroy fills the role of substitute as well and as admirably as a can of LeCroix does for pop.  He's not meant to be a long-term fix, but he's quite capable of providing some enjoyment of his own in the absence of soda pop... I mean, Willson Contreras.  For good measure, he even had a pair of hits and RBI in his Cubbie debut last night (let's just pretend the catcher's interference leading to the tying run scoring didn't happen).

Welcome to Chicago and to the CATRC, Jonathan "LeCroix" Lucroy!