There Goes My Hero (Card)

This weekend marked my yearly pilgrimage to the famed Brickyard, the home of the greatest spectacle of speed this side of the Atlantic, aka Indianapolis Motor Speedway.  For the better part of the last two decades, my family and I have made the three-hour trek southeast from Chicago to Speedway, IN to take in the festivities surrounding the famed Indianapolis 500.   While we have never been able to make it town for the race itself, since 2003, we have made it our mission to see how the field is set for the Memorial Day tradition, coming to town to enjoy the Pole Day and/or Bump Day drama.

This year, despite the overly-rainy spring and the dreary weather forecast, was no different.  Although precipitation was anticipated throughout the late morning and afternoon, making the likelihood of on-track action a longshot, at best, we still loaded up the car and drove three hours down I-65.  The risk vs. reward potential was potent - the chance that we might get to see if Penske Racing could win yet another Pole Position and whether or not Formula One Champion and international superstar, Fernando Alonso, could actually get "bumped" from the starting grid of 33 cars provided a strong draw.

From the moment we parked, most of the day was spent under awnings and umbrellas, soaking up rain instead of intrigue.  Luckily, the Speedway has a sprawling museum within it's walls, which provided a welcome distraction from the gloom around us.

The facility is stuffed to the gills with historic vehicles and artifacts from the facility's 111-year past, including a special exhibit dedicated to the most famous name in American auto racing, Mario Andretti, celebrating the 50th anniversary of his only triumph in the Indianapolis 500.  However, that being said, despite coming face-to-face with the very Marmon Wasp which crossed the finish line first in the inaugural "500" in 1911 and the iconic Borg-Warner Trophy itself within the museum walls, it was actually something that I came across in the lobby that caused me the most wonder: 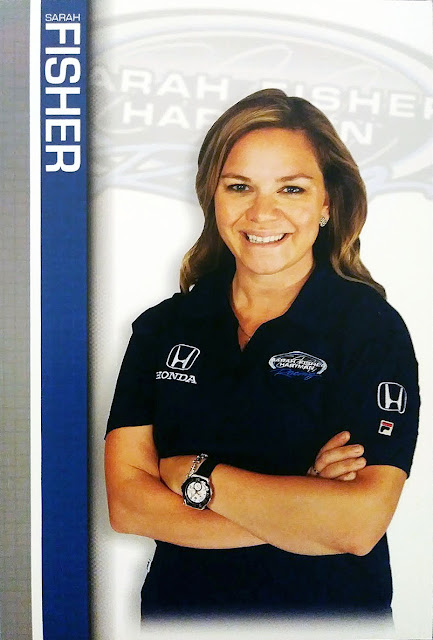 Nestled among the complimentary maps and spotter's guides scattered on the ticket counter, was this sole hero card.... and I took one of each.  For those who are not overly familiar with motorsports memorabilia, hero cards are basically over-sized trading cards that are used by drivers to fulfill autograph requests during appearances. Thus, coming across something like this at the country's most famous racing circuit, on the surface, isn't much of a surprise.  But, here's the thing...

Sarah Fisher is one of a select few women who has qualified for the "international 500-mile sweepstakes" and broke down barriers at the speedway as both a driver and owner throughout the 2000's.  This hero card showcases Fisher's racing team, Sarah Fisher Hartman Racing... which hasn't been to the track since, or any track at all, since 2014. Hmmmm.... 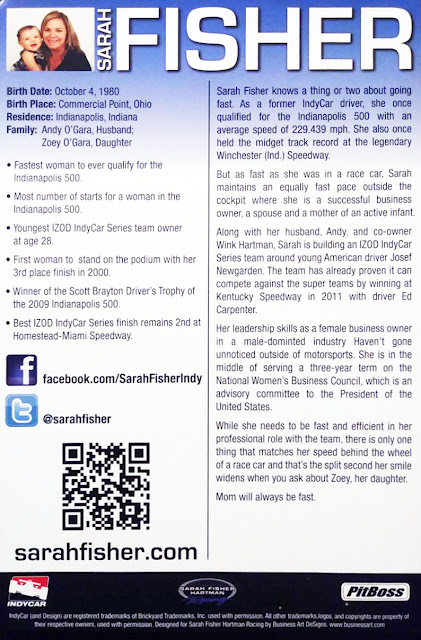 A look at the reverse of this perplexing oddball indicates that our mystery card dates from the year 2012, a year in which she and her team provided future IndyCar Series Champion, Josef Newgarden with his first big break in the sport.

As cool as a find as this was, all I can think about is what in the world is a hero card from 2012 - a full seven years ago - doing here?  Was it left behind by a fan, who hoped to run across the famous driver and get her signature, while paying for their museum ticket?  Did a museum employee stumble across it in a stack of papers and tossed it out with the track maps to simply get rid of it?  Does Sarah Fisher sneak about the speedway and leave these hidden in secret places as a calling card?  The world may never know.

At any rate, this oddity is mine now.  Since Indy Car hasn't had a set of cards made since 2007 (and before that is spotty, at best), these hero cards are the closest thing to traditional trading cards the sport has.  I'm quite content adding this souvenir to my most "IndyCard" collection.  Maybe someday I'll even fulfill it's purpose and get Sarah to sign it in a future month of May.

Anyway, let me throw up a few pictures of what was found in the museum itself.  After all, I talked it up pretty heavily and then proceeded to blabber on and on about a random card I found in the lobby outside.


That's obviously a small sampling of what's to be found with the IMS Museum; however, I can't give away all their secrets in this silly blog post.  I will say, I've wandered around the museum many times and I am always awestruck by the incredible progress made in the automotive and racing industries.  Seeing all these eras of the race physically represented under one roof is an experience I can't recommend enough.  If you're ever in the area, I cannot recommend stopping by enough.  They're even open year round!

Luckily for us, a couple of hours after we wrapped up in the museum, the skies opened up and a little sunshine broke through.  Although, with more storms on the way, the window was going to be tight.  As such, the track-drying crews lept into action, fired up the fleet of jet-driers, and got the surface ready to go in just an hour and a half.  Lo and behold, there was racing, after all!

The drama was absolutely worth the wait, as well.  Lo and behold, the Goliath of Alonso and legendary Team McLaren were taken down by the David of Kyle Kaiser and his un-sponsored, single-car operation in the very last run of the qualifying session.  After witnessing that major upset, in person, made Simon Pagenaud winning Penske's 18th pole feel almost like a footnote.  The month of May began with Alonso's quest to win motorsports coveted "Triple Crown" - the Indy 500, 24 Hours of LeMans, and the Grand Prix of Monaco (the latter two of which he's already conquered) - as the dominating story line and, yet, he didn't even qualify for the race... beat by a team that didn't even know if they had enough money to make an attempt.  I do not think anyone could have possibly predicted such a shocking turn of events.

Just a few minutes after the starting grid was officially set - we hadn't even made it back to the parking lot yet - the rain began to fall again.  Talk about perfect timing!  Considering the bleak outlook, the day could not have possibly gone better for us and our fellow spectators - everything worked out perfectly and we got a damn good show.

Now, the field of contenders is set.  All that's left to is to see who wins the 103rd running of the Indianapolis 500 this upcoming Sunday.  Rather than dodging raindrops, I will be watching the race comfortably from my couch, cheering on Graham Rahal and Sebastien Bourdais.

I'm glad I found that Sarah Fisher hero card hiding out at the museum, as it provided the perfect excuse to profess this on Wrigley Roster Jenga.  I have to wonder though, am I the only baseball card blogger who pays attentions to the goings-on of Indy?  Are there others on the blogosphere who enjoys the high-octane thrills of the greatest spectacle in racing?  Please feel free to revel with me in the comment section below.

This might come as some surprise, as I absolutely adore the Cubs and baseball (after all, I have this whole blog centered around the franchise); but, the Indianapolis 500 is my favorite annual sporting tradition!