First, I am a scavenger and have been since that day in pre-school when the teacher taught us how to make pretty collages out of litter we found on the street.  Since then, I've constantly found myself picking up junk I find on the ground, be it football cards or the rest of the bric-a-brac which lines my junk drawer.  In fact, just the other day, my better half had to tell me to get out of the trash when she saw me eyeing a perfectly good printer in a nearby dumpster.

Second, my decorative style is more akin to TGI Friday's than it is to Ikea or a home goods magazine.  Rather than there be a cohesive theme or color scheme to my decor, my walls and shelves are plastered with disconnected bits of memorabilia and art.  Nirvana posters, pennants, photographs, 5k bib numbers, street signs old trophies, model cars, etc. are "strewn" about with little rhyme or reason.  Heck, there are even cheese trays nailed up on one wall.  In short, walk into your local Applebee's and you can see where I take my inspiration from.

These personality traits are polar opposite of my lovely wife and, god bless her soul, she has chosen to try and contain them rather than kill them.  Rather than forbid me from decorating any of our living spaces, she cordoned off my stuff to our mutual office space.  Instead of completely stopping me from lining my pockets with random junk, she has assisted me find better and classier ways to store and display my "treasures."  All in all, it makes for a happy and healthy compromise. 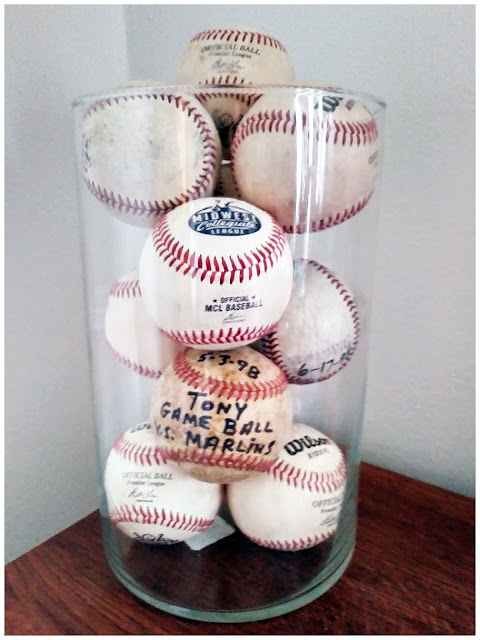 Throughout my years on this planet as a rabid fanatic of our nation's great pastime, I've slowly accumulated a girth of baseballs with which I had no idea what to do nor did I have any intention of getting rid of them.  Now, I'm not talking about my Hank Aaron signed sphere or my Thomas Ian Nicholas inked floater - those special balls are displayed in a proper location of their own.  Over time, this hoard of leather and cork has been building up on the shelves of my closet and spilling out onto shelves and desks throughout the household.  In all honesty, it was getting a touch out of hand.

Then, my wife stepped in and up. Thanks to this lovely vase that she purchased for me as a birthday gift, I now have a cozy (and contained) home for my misfits AND a way to properly display them in an almost Home Goods-like manner.  She's managed to turn part of my junk collection into a conversational display piece!

In case you were curious, here are some of the hardballs that are no longer in danger of being disposed of or stored away in the shadows: 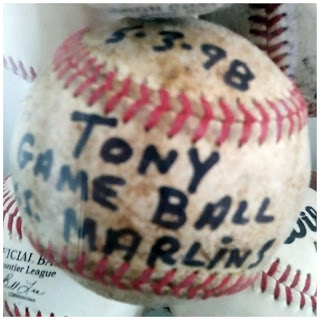 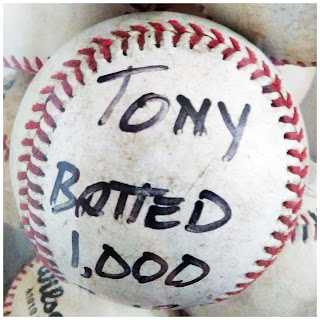 First, some "game balls" from my Little League days that I re-discovered in a tote tucked away in my parents' storage shed.  They're silly; however, after all these years, it would feel wrong to simply toss out these little bits of my childhood.  Plus, I have to be able to prove that I had some good days on the diamond, rare though they might have been! 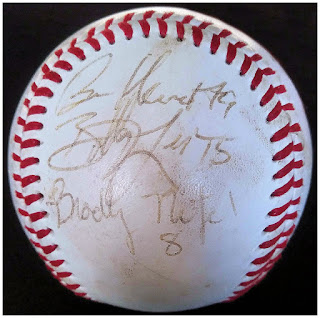 Next, we have a ball autographed by a few independent league players that I uncovered at one of my local thrift stores.  Sometimes I come across my junk in the gutter and other times I happen upon it while secondhand shopping.  I dedicated an in-depth post to this trinket a few months back, so I won't go into great detail here.  But, I was torn with this piece - no offense to these guys, but it didn't feel worthy of being displayed with the rest of my "John Hancocked" orbs.  Plus, I didn't obtain the autos myself, which makes them a little less special, in my eyes.

That being said, I didn't think I could jettison a ball signed by bonafide pros with which I actually had some minor connections to (details in that post), so this bit of memorabilia occupied a sort of purgatory in my collection. 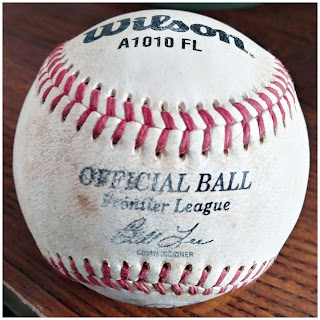 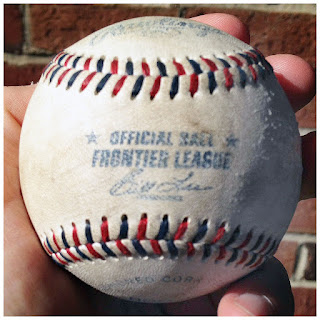 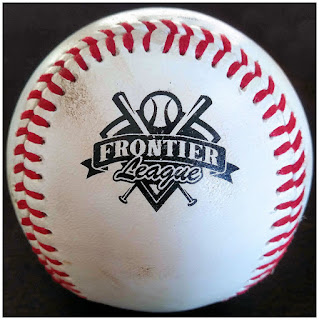 Furthermore, I've been sitting on a small "fortune" of foul balls from the local minor league stadium, occupied by the Windy City Thunderbolts of the indy Frontier League.  Having been to many contests at the park throughout the past two decades, I've managed to grab a few of these ovoids at sparsely attended games.  I don't care how old you are, there's a special thrill in nabbing a foul ball at the ol' ballpark... as long as you aren't depriving a child, after all.

Granted, individually, there is nothing unique or special about these souvenirs and the thrill has long since passed.  Again, this is what put them in danger of being on the chopping block.  Thankfully, this vase brought with it a desperately welcomed stay of execution! 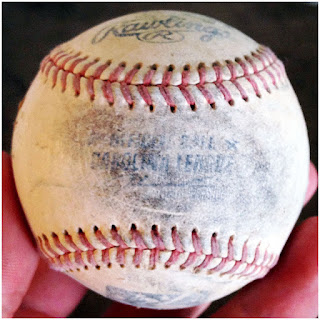 This is certainly the most... let's say, weathered... ball in my possession.  A couple of years ago, our friends got married near the border of the Carolinas and we made our way down south for the festivities.  Let me just tout my wife again here - on our way back to the airport in Myrtle Beach, she suggested we stop by the home field of the Cubs-affiliated Pelicans ballclub.  Although it was the off-season, the facility just so happened to be open for tours and I stumbled (almost literally) across this battered orphan near the batting cages.  It may be hard to tell, but this is an authentic Carolina League baseball.  Knowing my scavenger tendencies, you best believe I scooped it up and stashed it in my hip pocket!

As you can plainly see, this is far from being a display worthy piece on it's own.  On the other hand, it holds a vast amount of sentimental value - a reminder of a beautiful wedding, a fantastic vacation, an unexpected side adventure, and a sign of how much my wife loves and cares about me.  Courtesy of another gift from her, I now know exactly what to do with it! 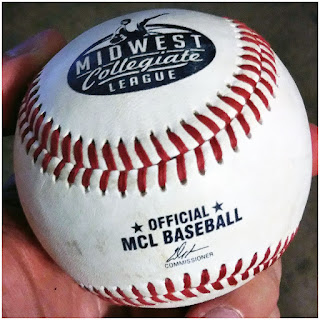 Finally, we'll close with another ball that I found abandoned nearby a baseball field.  I happened upon this Midwest Collegiate League spheroid in the parking lot of Oil City Stadium, the home of the Northwest Indiana Oilmen.  This college-level summer league team played right across the street from my former workplace and, as such, I have an affinity for the franchise.  While departing what was supposed to be a combination card show and doubleheader at the facility, I nearly tripped over this long foul ball on my way back to my car.

Again, I'm a scavenger.  There was no way this puppy wasn't coming home with me.  It was the unexpected highlight of the afternoon!

With that, we've reached the bottom of the vase.  There are a few filler balls that I have gathered from local parks, t-ball fields, and forest preserves, but nothing notable enough to showcase on Wrigley Roster Jenga... just balls left behind by kids when the streetlights came on.  But, thanks to the way I'm wired, I couldn't leave them stranded.  In the words of the great poet and wise philosopher, Popeye the Sailor Man:

Is anyone else out there on the blogosphere a borderline hoarder like me?  Am I the only one in our community who can't help but pick up a shiny object or trinket when happened upon in the gutter or thrift shop?  Does anyone else find themselves looking at the walls of their local steakhouse and thinking, "gosh, this looks like my apartment."  Has anyone else discovered a clever means of storing their goodies like my wife's creation of vaseball?  Please feel free to discuss in the comment section below!

In the meantime, I might have to look into purchasing another one of those vases.  As you can see from the picture which leads off this post, I've already stuffed it to the gills and I don't plan on changing my ways anytime soon.