The Team That Time Forgot

1938.  The world was teetering on the edge of another Great War and America was still mired in the Great Depression.  Escapism was welcomed... almost needed.  Thankfully, there was plenty going on in the world of entertainment.

This was the year that the funny papers introduced us to some guy in tights who leaped tall buildings in a single bound.  A cartoon rabbit first popped out of his hidey hole to torment animated hunters for the next seven decades.  Orson Welles accidentally pulled the greatest prank in the history of the world with a little radio drama he called "War of the Worlds."  In sports, Seabiscuit defeated War Admiral by four lengths in their famous match race at Pimlico and Joe Louis knocked out Max Schmeling in the first round of their rematch at Yankee Stadium.  As you can see, it was a big year for the art of distraction.

Speaking of Yankee Stadium, boxing wasn't the only professional sport hosting a championship within it's confines.  That year's fall classic featured the formidable New York Yankees (because it was the 30's, of course it did) and their challengers from the Midwest, the Chicago Cubs.  This too was a rematch - a grudge series that served as a follow up the "Called Shot"-lead beatdown served up by the Bronx Bombers on the pre-goat, clobberin' Cubs, six years previous - and involved the two most highly populated metropolitan areas in the United States.  It was truly a clash of the titans.

Or... at least, it should have been.  Again, just like they had in their domineering four-game sweep of 1932, the Yanks brushed the Cubbies under the rug without nary a peep from their toothless challengers.  Of course, that's just how it was for those who went up against Joe DiMaggio and the New Yorkers back then.

For loyal Cubs rooters, it was surely a stinging loss, but not a defeating blow.  After all, the club was a consistent threat for the NL pennant and had made a World Series appearance every three years since 1929.  It was only a matter of time before the North Siders finally broke through and donned the ultimate crown, right?

Well, we know how that story ended, 78 loooooong years later.

Anyway, those Cubs of 1938 have long been forgotten.  That fact is simply criminal, as that season featured the most furious comeback in the history of the Chicago franchise and maybe one of the greatest in all of baseball history.  On July 20th, with the Cubs mired six games back of the Pittsburgh Pirates, the front office shook things up and promoted catcher Gabby Hartnett to player-manager.  From there, Hartnett and mid-season acquisition, Dizzy Dean, lead the charge up the standings, closing to within a game and a half of the Burghers when they came to town with just one week left in the season.

History was made as the Cubs delivered a devastating three-game sweep of the would-be champs, punctuated by Hartnett's now legendary "Homer in the Gloamin'."  In the second game of the set, with darkness descending on the light-less Friendly Confines, the score was knotted at five runs all going into the ninth inning. It was getting to the point that the umpires could hardly see incoming pitches, so they ruled that the ninth inning would be the last to be played. According to the rules of the time, that meant the entire game would have to be replayed the following day if the score remained tied. With two outs and a dreadful 0-2 count, Hartnett surprisingly launched a Mace Brown pitch deep into the night and shadowy Wrigley Field instantly became, as the kids say today, lit.

From that point on, the North Siders never relinquished the peak.  Anyway, you might be wondering, why am I randomly rambling on about the 1938 Cubs today?  I thought that I should get my readers more acquainted with this forgotten Chicago squad, since my Cubs All-Time Roster Collection recently got a whole lot more familiar: 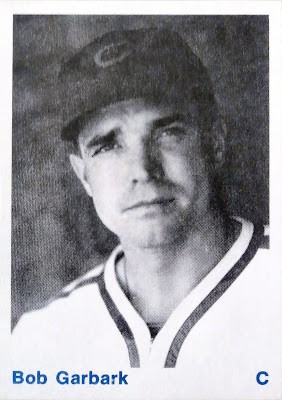 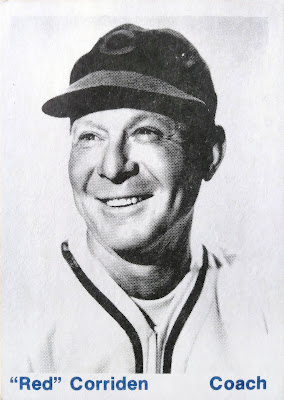 As a Christmas gift (I've been sitting on these a while) I received a healthy selection of singles from TCMA's 1976 release centered around the Cubbies who won in the gloamin'.  The kings of oddball cards were churning out several team-centric and retro sets likes this at the time and it's a good thing they did, seeing as these exceptionally specific, no frill sets created the only attainable (or only cards, period) of guys that I've long needed for my CATRC binder.

Of course, I already had the big names repped in the tome - i.e., Hartnett, Dean, Billy Herman, Stan Hack, etc.  These Hall of Famers and stars have a much larger cardboard footprint than the third-string catcher, Bob Garbark, or a bench-jockey like Red Corriden  For the record, Garbark appeared in parts of three season with the Cubs (1937-39) - never tallying more than 24 appearances.  Also, while Corriden was only a coach by 1938, he served as utility infielder for the club from 1913-15 - a relative dead period for baseball cards. 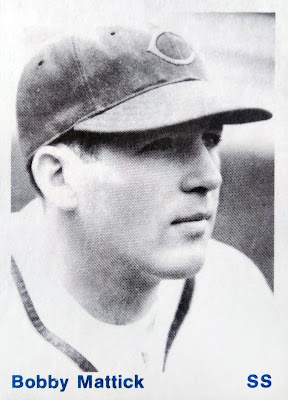 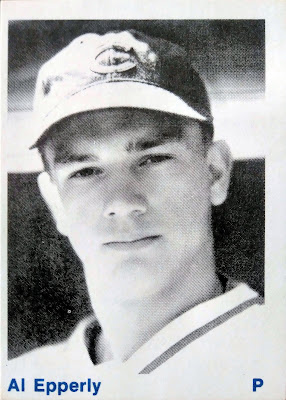 While both Garbark and Corriden were entirely new additions to my CATRC, these two gentleman you see above were technically already accounted for in said three-ring book.  However, these two cards serve as significant upgrades to what was already there.

Three has been the general theme with this particular batch of baseballers and Bobby Mattick is no exception.  He too spent a total of three seasons with the Chicago National League Ballclub, making his MLB debut in 1938 and sticking around the Second City until 1940.  After two years further with the Reds, Bobby would eventually pop up in the Big Leagues again nearly forty years later, as a skipper for the Blue Jays from 1980-81.  His 1981 Donruss single from that latter tenure had previously occupied Mattick's slot.  Obviously, I'm always going to take the opportunity to "Cubgrade" my cards!

Meanwhile, Epperly breaks our chain of threes as his Cubs career expanded no further than 1938.  In fact, he would not appear again in a Major League game until another brief cameo with Brooklyn in 1950.  As such, this TCMA oddball is one of a scant few official issues available for the coffee sipper.  Unofficially, Al had already been nestled in my UltraPro pages with a super vintage custom card that an intrepid youngster had whipped up back in the day - however, as cool as that antique is, I prefer my cards to be truly authentic, when possible.  Plus, the lad had confused Epperly with fellow Cubs hurler, Paul Derringer.  Of course, a couple of those unique pieces still reside in other pockets of my collection.

These were all of the TCMA 1938's to show up under my Christmas tree; that said, they weren't the only Cubs from that historic season to appear in that particular stack: 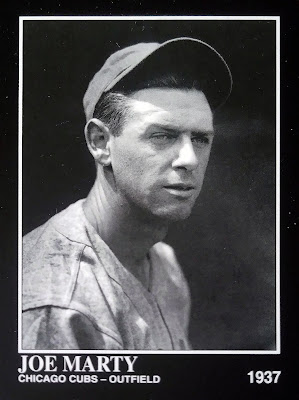 The Conlon Collection continues to be an invaluable source for my extremely niche collection.  TCMA and other oddball brands have contributed mightily to my collecting cause - however, the flow of Conlons into my binder has been a steady stream since the day I began my endeavor.  Every time I think I've acquired all I need from the four-year running brand of the early 90's, I find another unexpected need hiding within it's checklist.  This time, it was Joe Marty who was hiding in plain sight.

Marty was yet another three-year member of the Cubs during the late 30's, with his stint lasting from 1937-39 as an extra outfielder.  Notably, Joe was the first Cubs player to homer in a night game, which he did on July 1, 1938 while playing in Cincinnati. Also, he drove in 5 runs in a single game during that 1938 World Series (they, of course, still lost).  Furthermore, Marty had been minor league teammates with a rather notable member of his World Series opponent: he and Joe DiMaggio had played together with 1934-35 San Francisco Seals of the old Pacific Coast League.  Post-Cubs, Marty had another three-year stint, this time with the Phillies.

On that note, this Marty marked another "Cubgrade" addition, as I had previously acquired a modern reprint of his 1941 Play Ball issue in Philadelphia garb.  Easy call there!

With that, I was able to add two entirely new names from the 1938 squad to my Cubs All-Time Roster Collection, as well as three "Cubgrades" to go along with them.  That's not a bad haul and  it served as a great opportunity to remind myself of how awesome that '38 team was down the stretch, even if they were ultimately swept out of the World Series by the Yankee juggernauts.

Of course, the teams of 2016, 1908, 1984, and 1945 will forever be remembered better or far more widely discussed, we Cub fans should never forget about the "Homer in the Gloamin'" and the Cubs' furious late-summer charge to usurp the Pirates back in 1938.

It was a magical year for Chicago baseball and a significant one for the country as a whole.