Switching the Laundry Over

The hamper in our household has been filling up quickly this season.  My wife and I lead pretty active lifestyles -  both of us usually work out at least once a day, be it running, yoga, weight lifting, or Country Heat (not my favorite).  My running is usually done outside because treadmills are the devil, necessitating multiple layers this time of year.  Additionally, the holidays have been jam-packed with outfit changes based on photograph opportunities, food spillage, and/or whether or not we'd be visiting the home of a smoker in our Christmas adventures.  Not to mention, we both like to get comfortable at the end of a long day by swapping out our jeans and button ups for some warm and fuzzy pajamas.

Therefore, it's no mystery why our laundry pile grows like a dense, smelly patch of weeds.  Luckily, my wife and I have both been on vacation for the past week and change, so we've been able to keep up with the mound more quickly than normal.  However, the end of winter break is fast approaching and I'll likely soon get reacquainted with the back of my closet.

Thus, in the waning days of my break from the school district IT life, I would like to take advantage and get through one last load of laundry while I have the time. 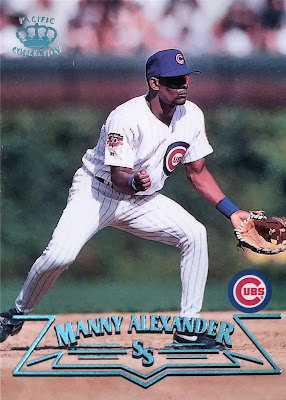 By that, I mean I want to show off the latest laundry switch-ups, or "Cubgrades," I've made in my Cubs All-Time Roster Collection binder.  The real laundry can wait another couple of days... said the doomed procrastinator.

Back in the glory days of having multiple card companies with official licenses, not only was there more innovation in the trading card industry, there was more variety in player selection.  Between Topps, Donruss, Upper Deck, Pinnacle, Leaf, and Pacific, it seemed like most players who spent a significant amount of time on a 25-man roster would show up on cardboard in one of the potpourri of products hitting store shelves.  Nowadays, in the era of just Topps and a few logo-less "competitors," the stars, prospects, and rookies soak up all the attention, while the bullpen arms and bench players are lost and forgotten, like so many singular laundromat socks.  Today, it would be a small miracle if a guy like Manny Alexander showed up in anything other than maybe Update, if we were lucky

Thankfully, back in the 90's, sets like 1998 Pacific Collection were around to fill in the gaps. 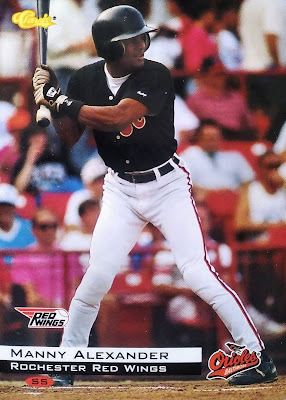 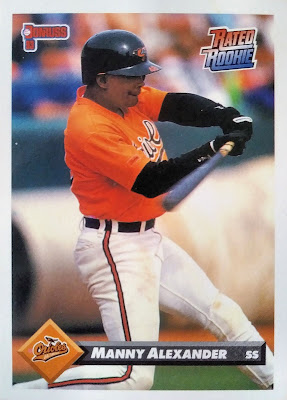 This wonderful, ivy-backed shot of Manny came as part of a much larger stash of cards as a Christmas gift from my father, which has been the subject of several posts over the last week or so.  Prior to that holiday surprise, the only two Alexanders I had as options for my treasured CATRC were the two singles you see above.  While I do love minor league cards, I have a separate binder for those; furthermore, I hold no ill-will towards the Orioles, but I do believe that almost every ballplayer looks better in freshly-pressed Cubs duds!

On a related note, paired with Manny was another "Cubgrade" that came courtesy of the 1998 Pacific Collection checklist: 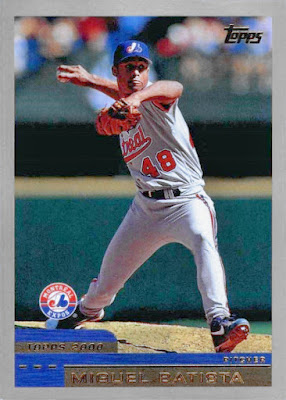 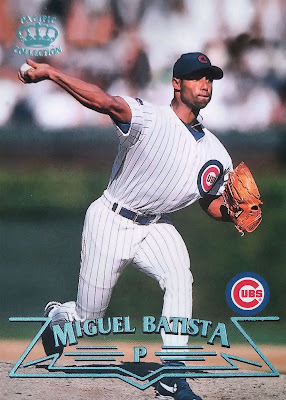 Miguel Batista stuck around Major League Baseball for what seemed like forever - first signed in 1988, he stayed on the diamond until a mid-season release in 2013.  His 18-year career saw him pop up in break Spring Training camp with 11 different clubs, making him one of the most well-traveled journeyman in the sport's history - sounds like he probably went through a lot of laundry too!  With all that in mind, it's easy to forget that Miggy was ever-so-briefly a Cub - for 11 games - in 1997.

There's basically no chance that Batista would end up with a Cubs card had his career centered around this decade - Topps would have paid his 0-5 record and 5.70 ERA  (yikes) no mind.  However, things were quite different in the diverse cardboard marketplace offered by the 1990's.

Like I said, the 90's were flooded by diverse player selection and cardboard innovation.  On that note, this next product epitomizes both of those characteristics perfectly: 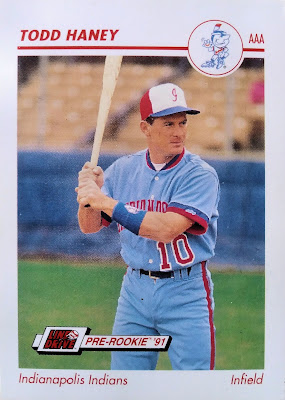 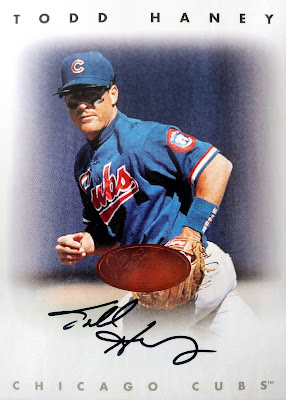 Pack-issued, certified autograph cards might be commonplace these days - however, they were still quite the novelty when the Leaf Signature Series his LCS shelves in 1996.  The first set to offer an autograph in every pack is also known for it's wide-range of signature subjects - more than 250 players signed for the first series alone!  Luckily for me, one of the players Leaf tracked down for the ambitious project was Todd Haney and the resulting bit of baseball ephemera remains the utility player's lone card in Cubbie Blue.

To be completely honest, I'm kind of surprised that Haney doesn't have more Cubs pasteboards.  The previous year, Todd came up from Iowa for his first extended bit of MLB action and absolutely, positively raked.  Across 73 at-bats, he destroyed NL pitching, posting an eye-popping .411/.463/.603 slash line.  Had Haney's introduction happened today, as a rookie playing for a major market club, he'd have about fifty cards and parallels before the bottom dropped out.  Again, different times.

Speaking of different times, let's fast forward from the 90's to the aughts: 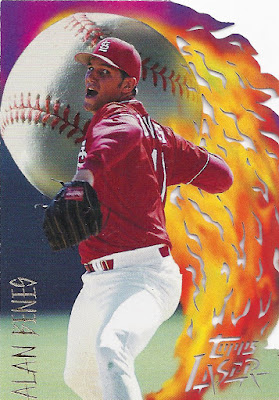 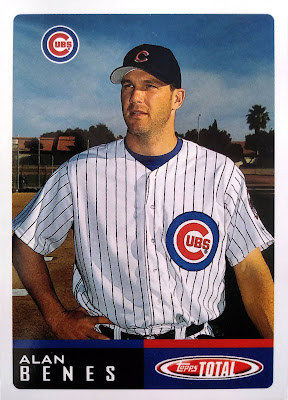 Exclusive monopolies were not yet a thing in the world of cardboard, though the competition was slowly beginning to die off.  Before they were able to secure complete comfort in the market, one of the best things Topps ever did was develop the Total brand.  From 2002-2004, this products sought to showcase more of the active roster than any checklist before; in fact, the inaugural edition and it's 990-card manifest was, by far, the most comprehensive baseball card set the old bubblegum company has ever released.  It was the only place a mediocre, non-closing reliever like Alan Benes had a chance to appear.

Appearing in only ten "Total" games from 2002-03, it's a minor miracle that Alan's Cubs tenure was documented at all.  But, that's why the Total banner still has a cult-like following today - bring it back, Topps!

Finally, our last "Cubgrade" of the day also hails from the same decade: 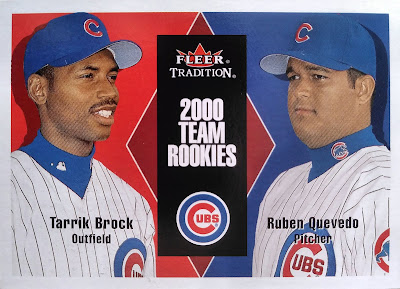 Did you know that Tarrik Brock is one of the few Cubs players to ever debut on foreign soil?  I'm not talking about in our neighbor's north of the border either - Tarrik's maiden Major League appearance came in the land of the rising sun, when the Cubbies and the Mets journeyed to Japan for MLB's special opening series in 2000.  Thanks to the Fleer Tradition release from that year, I too know this fun fact now.  All told, thirteen cumulative games that year would be the extent of Brock's big league experience.  Thus, he was forced to share his only MLB card with fellow rookie, Ruben Quevedo.

It's a funny coincidence that this light-hitting (.167) outfielder had made his debut in another country, seeing as, for the longest time, he was represented in my CATRC by a card from another land, as well: 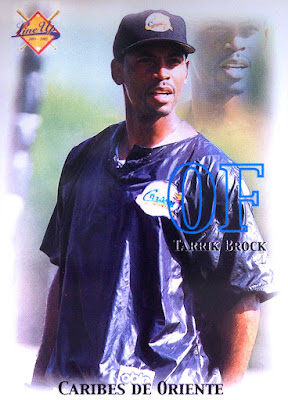 Of course, that land was Venezuela, not Japan.  Tarrik's Major League career was over after 2000, but  he didn't give up on his professional dream.  In 2002, he was playing winter ball in the Liga Venezolana de Béisbol Profesional (LVBP), as this Line Up single will attest.  I must admit, I'm a little disappointed to boot this multi-cultural oddball from my main binder; but, it will still find a place in my binder of minor league/foreign league/Negro League cards.

With that, this load of laundry is finally done.  And I didn't even mess anything up!

That about covers all of the laundry switches found in my Dad's overly-generous Christmas gift; but, there's still plenty more content to cover from that yuletide haul.  I'm going to try and run through the rest of the goodies over the next couple days; although, at this rate, it's going to be next Christmas before I get through it all!

Thank you for joining me on the virtual laundromat known as Wrigley Roster Jenga today.  Now that I'm done with this 'load," maybe I should consider going to the actual laundromat with my heap of workout clothes and sweaters... Nah, I still have four more days before work starts back up - I'm sure I'll get it taken care of before then.  Suuuuuuurrrrrrrre.