There has been much ado made about the glacial pace of the free agent market over the last two winters and the sandbagging Cubs have certainly been no exception to this new normal.  While there hasn't been much movement on the player movement front - so far, Daniel Descalso remains the only Big League acquisition made by Theo and crew - this off-season has seen a flurry of activity in another facet of it's roster structure.  While the 25-man currently looks almost exactly the same as it did through the bulk of 2018, the same thing cannot be said about the coaching staff.  In fact, that staff bears little resemblance to the World Series winning crew of 2016.  Of that crew, over the past two seasons, only two men remain employed by the franchise with several positions turning over multiple times in that short span.

In some regards, that's the price of success - the Cubs have been quite successful over the past half decade and, thus, other clubs want to get a piece of the action.  However, part of that is also reflective of some poor decision making (the Chili Davis experiment, for example) and the fact that Joe Maddon heads into the upcoming season as a lame-duck manager.  Much like any professional setting, stability is a key ingredient to a productive workplace.

Since the end of this year's World Series, hitting coach Davis was fired, pitching coach Jim Hickey stepped down, assistant hitting coach Andy Haines was promoted in Milwaukee, and bench coach Brandon Hyde was poached by Baltimore to become their latest skipper.  In short, the staff will almost be entirely new once Spring Training comes around.

The Cubs had gone about filling all of these newfound openings, except for one that is - the bench coach spot previously occupied by Hyde.  With Maddon seemingly on the hot seat, the dugout's second-in-command in Chicago is sure to be put an interesting, maybe desirable position.  Rumors swirled around perennial future management candidate, David Ross, and fellow former Cub, Mark DeRosa, but both seem to be perfectly content as broadcasters for now.  Yesterday afternoon, word dropped that the North Siders had finally found their man and it was a name that came totally out of right field: 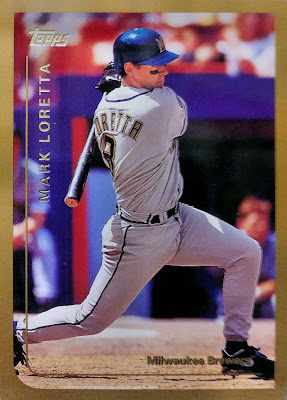 Mark Loretta spent fifteen years in the Major Leagues playing all over the diamond for five different clubs, from 1995-2009.  Along the way, he was named to two All-Star squads, even earning some MVP votes during his 2004 campaign with San Diego.  Oft-mentioned as a future management candidate, after his retirement in 2009, he came back to the California club to begin a career in the front office, becoming special assistant to the baseball operations crew in 2010.  Now, the Northwestern educated man is blowing back into the Windy City for his first opportunity to join a Big League coaching staff.

It should be said that Loretta spent the 2009 season with the Boston Red Sox, when Theo Epstein was running the ship and Jed Hoyer was one of his assistants.  Additionally, he began his FO career with the Pads when Hoyer was running that show.  As you can see, there's some connection there.  Also of note, while Mark has no formal experience as a Big League coach, he did manage the Israeli national team in the 2013 World Baseball Classic qualifying round.  So, that's something. 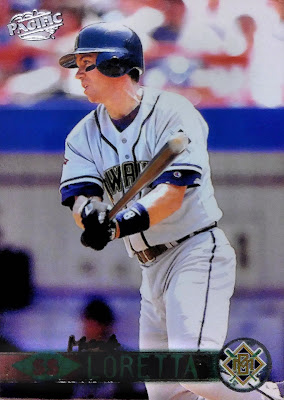 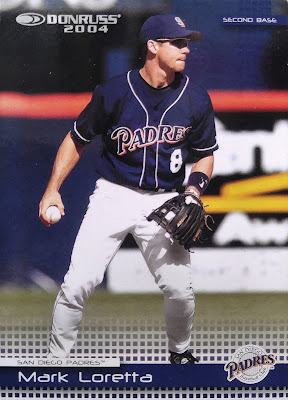 But, hey, if everything goes well for him in 2019, perhaps he can set himself up nicely as a successor to Joe Maddon, should either side decide it's time to part ways at the end of the season, or for further advancement in the front office if Theo and Jed value his communication skills.  No matter what, this is going to be a big season for the new Cubs bench coach.

Most importantly, after reading this announcement and immediately rummaging through my closet, I was pleased to discover that I had a few Loretta cards tucked away in my trade boxes.  One of these three contenders - clockwise from the top, 2000 Topps, 2004 Donruss, and 1999 Pacific - will be entered into the coaches section of my Cubs All-Time Roster Collection.  Hey - for me, making sure every new Cubs is properly represented in my favorite binder is critical!  Which one of the three cards do you think would best do the job?  I'm leaning towards the Pacific, but this Cubs fan is a little leery of allowing more Brewers content into my CATRC.

In the meantime, along with announcing the final configuration of their 2019 coaching staff, the club also made the public aware that they'd found a new mental skills coordinator in the same press release: 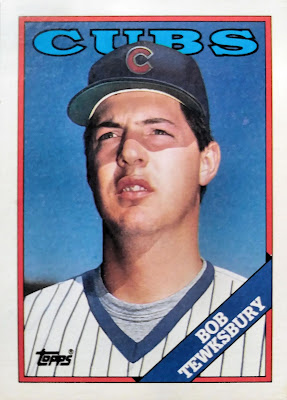 The position had been previously held by the universally respected, Ken Ravizza, who tragically passed away after suffering a heart attack back in July.  Ken followed Joe Maddon from the Angels to the Rays to the Cubs and is credited by players across the league for fine tuning their skills.  As announced yesterday, former Cubs and Cardinals hurler, Bob Tewksbury, will get a shot at filling Ravizza's enormous shoes and has previously served the Giants and the Red Sox in a similar capacity over the last few seasons.

Of course, this isn't a position on the traditional coaching staff, necessitating no new inclusion in my CATRC - Bob will be staying in the player section of the binder.  However, it is an excuse to show more Cubs cardboard on this Cubs cardboard-themed blog!

With that, until the Cubs acquire a player of consequence, I am up to date on the current Cubs roster, with both coaching and active players.  Here's hoping there's not another round of turnover next winter; of course, that specter looms large with the lack of extension offers put towards Joe Maddon.  At a certain point, this constant change in voice and leadership has take a toll on the Cubs, right?  Maybe Tewks can help counteract that?

Anyway, welcome to Chicago and to my CATRC, Mark Loretta!