What's in the Box?

As a result of my working for a school district, I've now had my first official snow day since I was a student myself, way back when.  After all, this is the first real snow storm we've had since I started this tech support job last February.  Thus, I'm going to use this newly rediscovered, child-like sense of wonder and excitement to write about baseball cards.  That seems appropriately juvenile for the occasion, at least in my opinion.  Maybe I'll even bundle up and venture into the frosty wilderness to build a snow man or toss snow balls at city buses.  Who knows, for sure?

But, first, remember those rubber ducks that my wife bought at Savers and I blogged about yesterday?  Well, space is getting to be short for her favorite collection and shelves are no longer capable of accommodating new water fowl additions.  Therefore, she had to get creative with her display method: 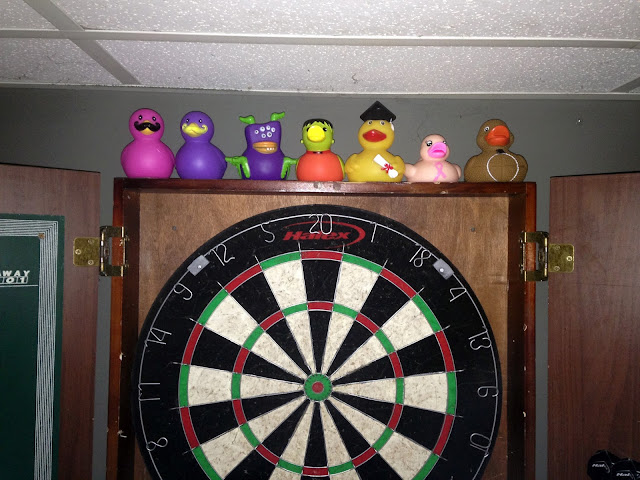 And that's the story of how I ended up with rubber ducks lined on top of my dart board.  I'm not liable if I hit one of those, right?  I have a tendency to go through Rick Ankiel-esque bouts of wildness when it comes to the game of darts.

Also, I like how that purple, monster/alien duck-creature appears to be shrugging, as if to say "What?  I'm not supposed to be here?"

I know what you're thinking, "this is fascinating, but what does any of this have to do with baseball cards though?"  Well, here's the thing - while cleaning off the top of the cabinet which contains my oft-forgotten dart board, my wife discovered a dusty, ignored cigar box, resting on the top of the faux-wood enclosure: 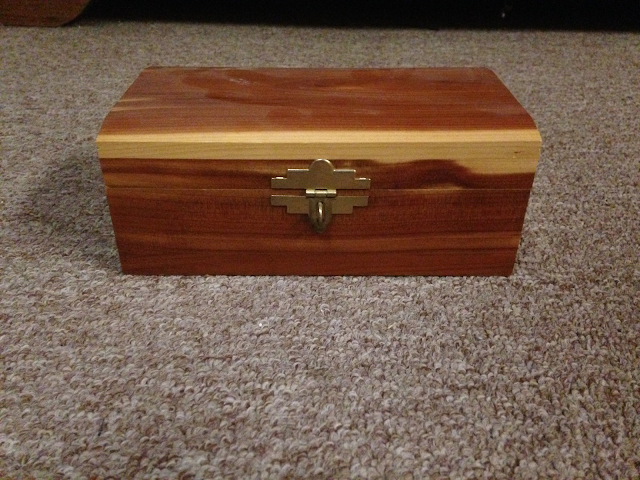 Honestly, I have no idea where this box originally came from.  Neither my wife or I smoke, nor does anyone in my immediate family.  So, it's not like anyone would just so happen to have a cigar box to pass around.  Actually, I'm not even sure if this is technically a cigar box.  With that in mind, this curious little box was already shrouded in a cloak of mystery.

Now, I did know that this container was perched atop my dart board; but, I'd always just assumed that was where I had originally stored my extra darts and spare flights.  I mean, it does seem like a good-sized box for such storage purpose.  However, I truly did not know for certain if that was the case.

But, you know what they say when you assume, right? You make an ASS out of U and ME.  At this point, the suspense must be killing you (as it did me):

Okay, okay - no need to get profane now.

Without any further adieu, as my wife was lining up her precious birdies along the top of the cabinet, I cracked open the mysterious container to great surprise.  I must admit, if I had a million and a half attempts, I would never have been able to successfully guess the contents: 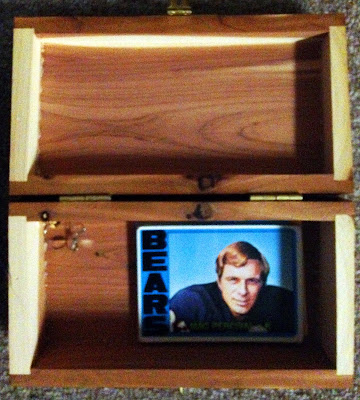 Cards?  Really?  How the eff did those get in there?  How long have they been there?  Did I put those there?  My mind was racing with so many questions and great concern for my powers of recall.  I have absolutely no recollection of putting any cars in this box.  Furthermore, I have absolutely no recollection of ever obtaining the cards in this modest stack, whether by purchase, trade, or otherwise.

Here's what I was looking at: 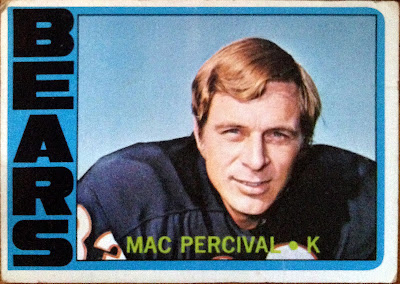 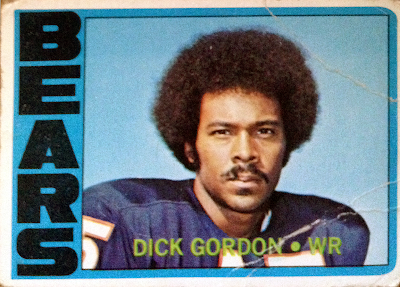 A pair of vintage Topps football, something that is sorely lacking in my collection.  With that note in mind, you'd think that I'd remember acquiring a relative rarity in my binders, especially so since Dick Gordon was a needed man for my Bears All-Time Roster Collection (sweet fro, btw).  I'm assuming that Mac Percival was absent from said collection as well, whenever I obtained these 1972 singles; but, in the time since, I've found a '71 of the kicker for that accumulation. 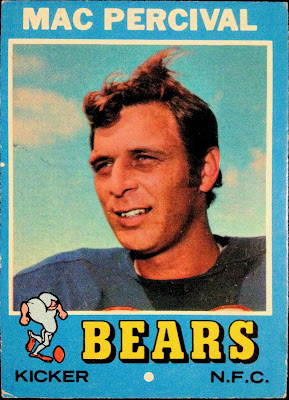 Little did I know that I already had a Percival, hiding from me in plain sight.  Drat.  At least they're both swell cards, if a little rough around the edges.

But wait, that's not all that I forgot about: 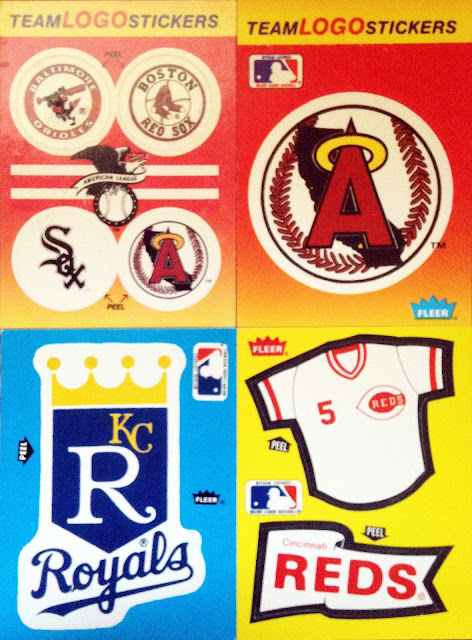 A bunch of Fleer stickers.  I'm gonna have the coolest and blingiest trapper keeper in school!

What do vintage football cards and Fleer stickers have in common?  Absolutely nothing, so I have no idea why I stored these two in-congruent items in a random cigar box hidden on top of my dart board.  Of course, this isn't the first time that I've placed a card or two in a weird, random place and forgotten about them.  However, this is the first time that, upon finding them, my memory was not jogged in any way.  Bizarre.

Oh well, Thanks to my better half's duck acquisitions, I was able to add another name to my Chicago Bears binder without dropping another dime.  I suppose I can't complain about that, eh?

However, I sure am going to be fun when I get older and even more forgetful... pray for my wife!