This must be the time to send out surprise mailings because this is the second unexpected envelope to show up in my mailbox (so far) this week.  I imagine that this has something to do with the impending arrival of Opening Day, as well as a confluence of new baseball card products hitting the shelves.  However, the number one reason is that we have obviously have an exceptionally generous community on the ol' blogosphere.

I don't think anyone can successfully debate that latter point.

One of the most generous bloggers that I have encountered over the past few years has been, without a doubt, Oscar (aka - Stealing Home) of All Trade Bait, All the Time fame.  I suppose the name of his blog should be an indicator of how much he likes to swap cardboard; so, I guess it all makes sense.  This Dodger collector must have a knack for pulling Cubbies, since I always get a steady supply from his California roost.

This time, the first few cards out of the PWE had a definite theme running through them: 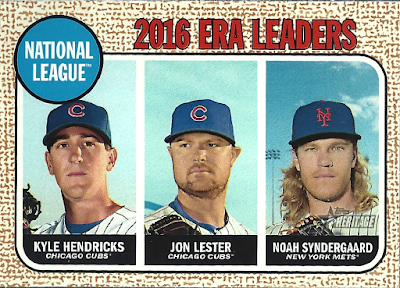 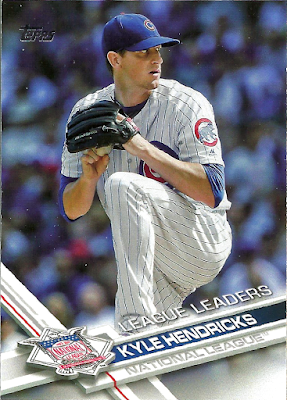 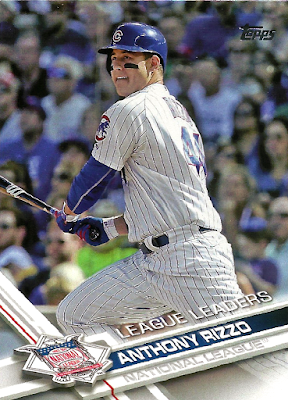 In addition to the fact that they're all from quite recent, 2017 Topps releases (Flagship and Heritage), they all feature statistical league leaders from across baseball.  Much has been made of the traditional, three-player "leader" cards being split up into single players in this year's edition of Flagship and count me in as one in support of that separation.  After all, I like my Cubs cards to feature just Cubs - why shouldn't Kyle Hendricks get singular recognition for leading the NL in ERA (not bad for an expected fifth starter)?

On the other hand, traditional is the name of the game in Heritage, so the three-player leaders remain, albeit with oddly cropped photos in order to preserve the cap logos ($$$).  I must admit, while I prefer the single-player change, it is pretty damn cool to immediately see how the Cubs' rotation was so dominant in 2017. 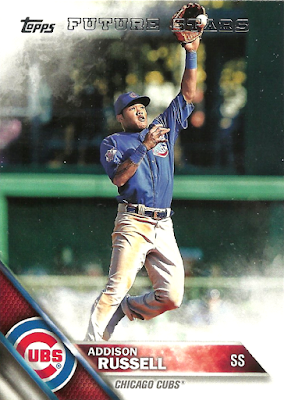 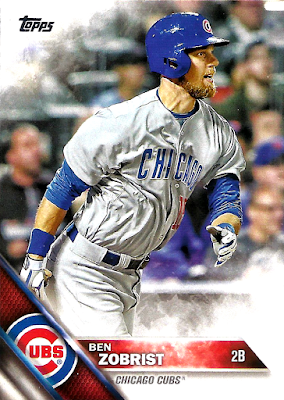 Following the leaders - ba dum tiss - we have a pair of base cards from the 2016 edition of Flagship.  I've always liked the picture chosen for the Russell card, seeing as it perfectly puts his number one skill on display:  his expert glove work.  Meanwhile, the Zobrist is also significant, seeing as it's the very first Cubs card of the eventual 2016 World Series MVP.  That definitely steals some added interest from this Chicago-centric blogger. 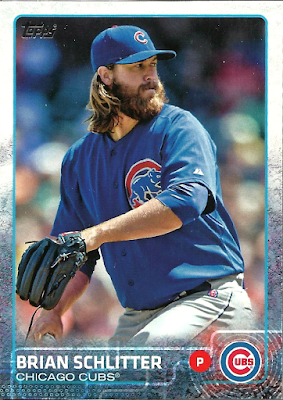 ... and this is really where the envelope goes down the Schlitter - again, ba dum tiss.

Brian was a reliever who constantly rode the shuttle from Iowa to the Majors in the first half of this decade and it's rare that these sorts of players get any love from the titans of baseball card producing.  Thus, it's always refreshing to see this card pop up and be reminded that, every now and then, Topps goes a little bit further with their player selection.  Still, it would be nice if they actually put a low-cost, collector-friendly set (like good ol' Topps Total) that showed more emphasis on comprehensive team sets.  Maybe someday....

Wrapping up Oscar's generous mailing, we again turn back the clock.  However, this time we're going to jump back a little bit further in time: 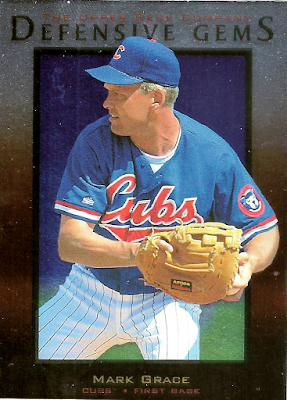 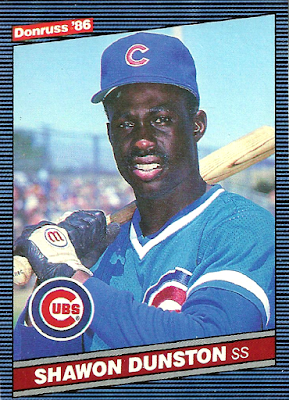 To put a period on his surprise PWE, we have a pair of fan-favorites from the late 80's through the 90's in "Amazing Grace" and the man who inspired the "Shawon-O-Meter."

Gracie was always one of my favorites as a kid, probably because, in the decade of Clinton and Tamagotchis, there wasn't much talent to cheer for at Wrigley Field, outside of Grace, Sammy Sosa, and Ryne Sandberg.  With that in mind, any new card of the underappreciated, hits leader of the decade is more than welcome in my collection, especially this shiny upgrade for a previously damaged copy.  Furthermore, this Donruss rookie of the canon-armed, but erratic shortstop is entirely new to my binders and it's downright strange to see Mr. Dunston looking so fresh-faced and young.

1986 Donruss might be a scanner's worst enemy - aliasing is a bitch - but, it's always had a soft spot in my heart.  I have a feeling this has to do with the fact that the main colors in the linear design are blue and red and thus work notably well with Cubs cards. 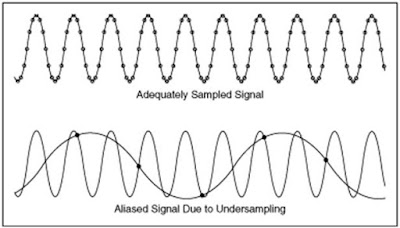 
With that, we've reached the bottom of this kind, surprise PWE.  Thank you Oscar for taking the time to put this together and for thinking of me when you pulled these sweet Cubs cards.  I'll make sure to put together a proper thank you package, ASAP.  Lucky for you, the knack for pulling Dodgers that I developed last year appears to still be going strong in 2017.