Surprise mailings are the best kind of mailings.  Seriously, whenever I come home from a long day at the office, dealing with cranky kids and even crankier computers, to find an envelope or bubble mailer resting quietly, with my name on it, in my mailbox... suddenly, it's like I'm a kid on Christmas morning again and all of my worries melt away.  For the few minutes in between carrying my treasure to my card space, ripping through the seal, and sifting through the contents, all is okay in the world.  I'd like to think that most of us online card collectors feel the same way.

Adam, from Cardboard Clubhouse, must feel that way, seeing as this is the second time in recent history that I've been the beneficiary of an unannounced gifting.  While he did give somewhat of a notice on his blog post from a few days ago, I got the same bubblies in my stomach when I saw my area code on his list of outgoing mail.

This mailer was no disappointment either, Adam truly knows how to get my Cubbie Blue blood pumping: 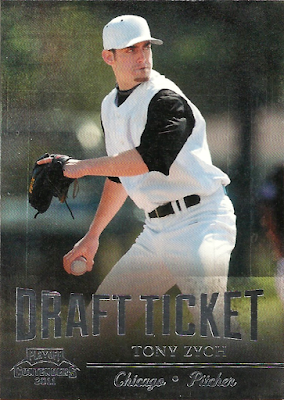 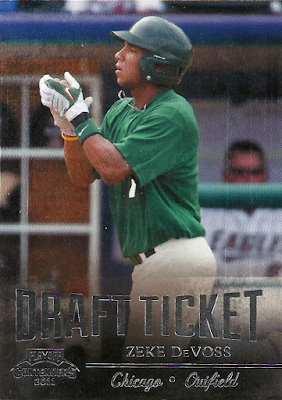 Ah - the Contenders brand, back when it flew under the Playoff banner and Panini hadn't yet taken over.  Adam must know that I love minor league and collegiate baseball cards, as the unfamiliar uniforms and teams add some extra zest to the product (even if they were then unlicensed).  They're even better when they depict future Major Leaguers, before they made it big, like Tony Zych.  Zych never made the ultimate ascent in Chicago; but, he did see time with the Seattle Mariners in each of the last two seasons, after his contract was purchased in 2015.  As such, this Zych will slide into my "Coulda Been a Cub" binder, quite comfortably. 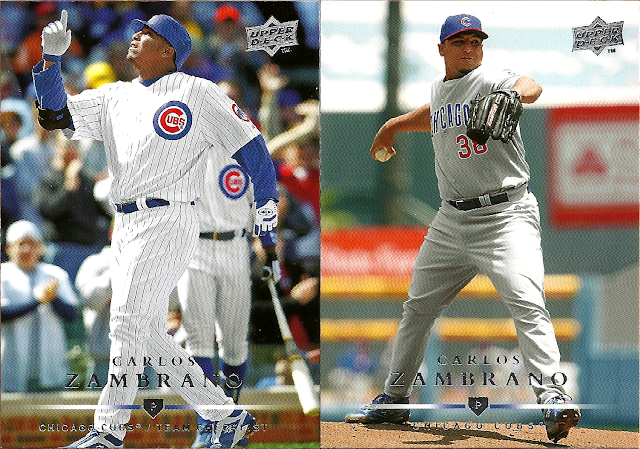 Moving backwards in time, we have a pair of Carlos Zambrano's from the latter days of Upper Deck baseball.  Now, the first thing that struck me was, "why does Big Z have two base cards in 2008 UD?"  Was one a photo variation or some kind of parallel?  Not exactly.

It's super hard to tell, thanks to the silver foil text on the front; however, once you flip these bad boys over, the answer becomes much clearer. 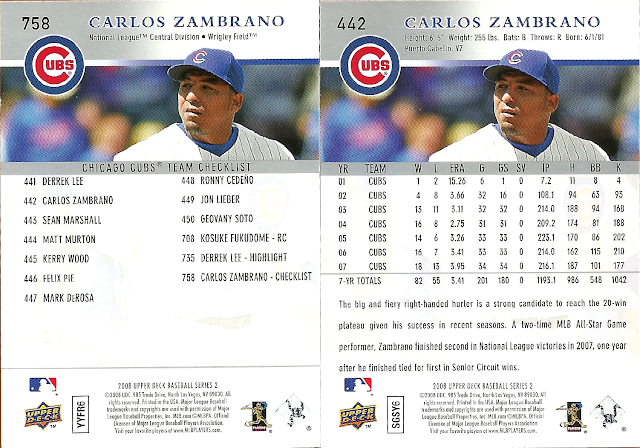 The one on the right is Carlos' true base card, while the one on the left is the team checklist.  As someone who's never really cared for checklists, I have and always will approve when card manufacturers attempt to make their checklist cards appear to be more like "normal" baseball cards.  After all, I have no use for 2.5" x 3.5" record keeping; I guess that just personal preference.

Let's roll back the clock a little bit further, to the mid-90's, for the meat of the mailer: 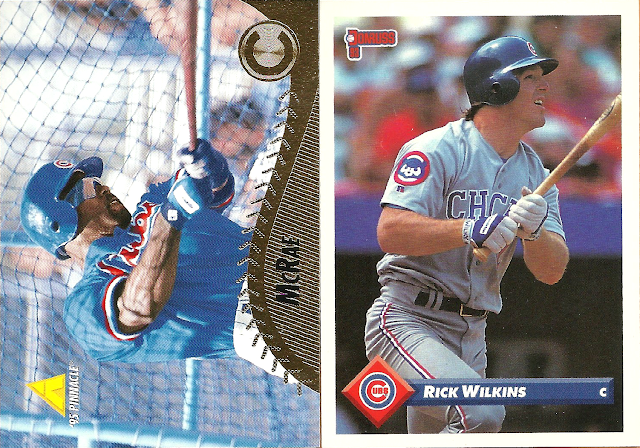 Adam included a nice sampling of 1995 Pinnacle and 1993 Donruss in this padded mailer.  The Pinnacle set from that year is a garish, foil monstrosity with a highly intrusive nameplate that lazily only gives the player's last name.  Yet, despite all of that, it was one of the first sets I saw at the onset of my collecting days, so I'll always feel a twinge of nostalgia for those cards.  Meanwhile, on the other hand, 1993 Donruss is a simple, bare-bones design that gets the job done without any flair.  It's definitely among my favorite collations from the latter Junk Wax Era.


Sticking with the mid-90's, but switching out our cleats for ice skates... 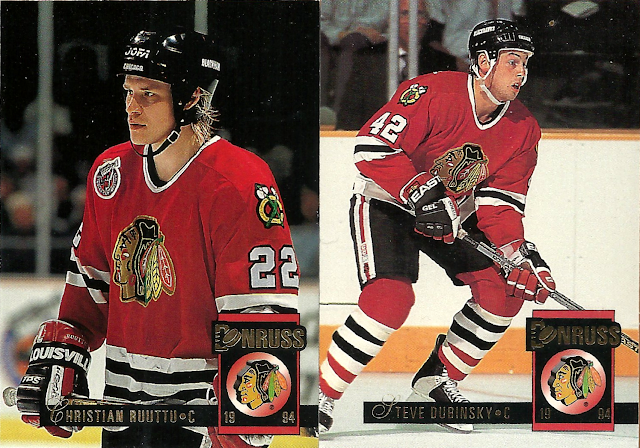 Here we have a pair of Blackhawks cards, from when the franchise was beginning their slide into irrelevance, by way of 1994 Donruss.  This set seems almost more like something Stadium Club would have put out in that time than it does Donruss.  On that note, it's a nice, clean set that lets the photograph do the talking.  Unfortunately, in this case, neither of these two photos are particularly eye-catching; but, the cards still look nice overall.  At any rate, they'll still fit perfectly well in my Blackhawks collection.

To wrap things up, we go back to the diamond and then go backwards in time by another decade plus. 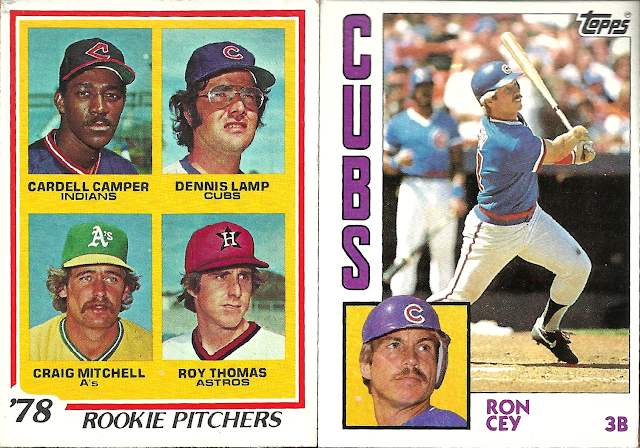 Yay - vintage!  Adam was kind enough to include some 1984 Topps, as represented by the Penguin, and some 1978 Topps, as represented by a rookie-year Dennis Lamp.  It may make a certain "night owl's" head explode, but I'll always think of Cey as a Cub first, as a result of his being the third baseman for the beloved '84 NL East Champions.  As such, any day I can add a new Cubs card of the Penguin to my collection is a good day and I did not yet have his 1984 single.

Meanwhile, Lamp looks like he smelled something nasty, just as the photographer snapped his headshot. Maybe he was just resentful that he'd have to share his rookie card with three other guys, of whom only he and, to a lesser extent, Roy Thomas (8 seasons, 3.1 WAR) proved to be credible Big Leaguers. 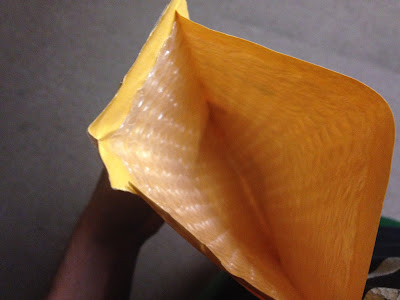 With that, I've reached the bottom of the bubble mailer and Christmas morning is over.  Well, not entirely, I still get to sort these new additions to my collection and put them in their proper places, not to mention write this blog post that you're currently reading.

Thanks, Adam, for thinking of me and taking the time to put this unexpected and generous package together - it was greatly appreciated.  I'll make sure to craft a return gifting ASAP, to give you that Christmas morning feeling - as soon they finish the renovations on my local post office, that is!

Email ThisBlogThis!Share to TwitterShare to FacebookShare to Pinterest
Labels: Blackhawks, Coulda Been a Cub, Trade