Why Not in Hall of Fame?

First off all, congratulations to Jeff Bagwell and Ivan "Pudge" Rodriguez on their selection to the National Baseball Hall of Fame, yesterday evening.  Special kudos to Tim "Rock" Raines on getting that coveted call after ten years of being ignored on the ballot, in his final chance.  The enshrinement of the second-greatest lead-off hitter of all-time was long overdue.  All in all, the Hall of Fame has itself one heckuva class of 2017.

Meanwhile, there were still several deserving names who did not get a plaque in Cooperstown.  Thanks to steroid accusations (Bonds, Clemens) and evolving positional valuations (Hoffman, Martinez), there has been a glut of worthy candidates who have congested the ballot in recent years.

As a result, a few Cubs who merit serious consideration were left outside, looking in: 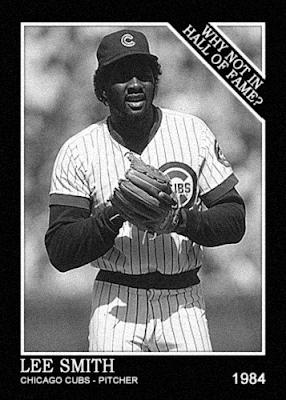 Lee Smith was the All-Time saves leader for many years and, arguably, the second most feared closer of his era, behind HOF'er Bruce Sutter.  However, thanks to the eternal debate about whether pure relievers are deserving, Smith has been continuously ignored as his career marks continue to be surpassed. 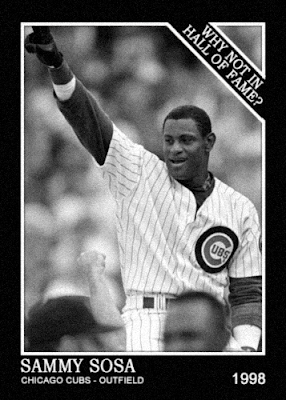 "Slammin' Sammy" Sosa is, simply put, one of the greatest of great sluggers - his membership to the 600 homer club will attest to that.  Of course, as with his fellow participant in the great home run chase of '98, steroid suspicions have kept him from being a serious candidate.  Plus, he seriously pissed off a lot of sportswriters, with a HOF vote, in his time. 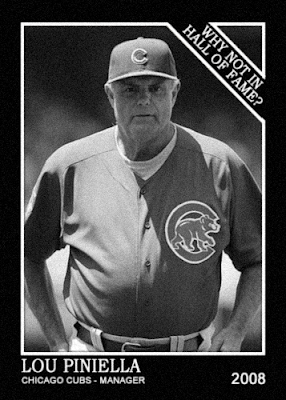 Lou Piniella managed the famous "Nasty Boys"-era Reds to a World Series title in 1990, guided the Cubs to their first back-to-back postseason appearances in a century and has the most managerial wins of anyone not in the HOF (with a winning record).  Unfortunately for him, having only one WS win is working against him.  If he climbed that summit with the Cubs, his ticket would have been punched, easily. 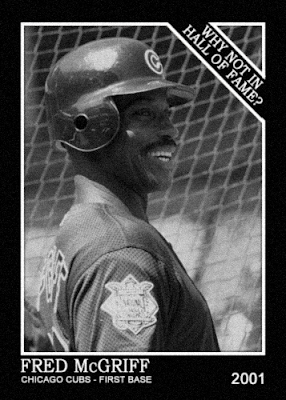 Fred McGriff was another great slugger, who, if he played in any other era, would have easily made the Hall.  The Steroid Era overshadowed his 493 long balls (despite playing clean) and his lack of a strong team identity (he hopped around a lot) have left him somewhat forgotten.  If only he cracked seven more long flies...

While they may not have been honored with a golden plaque, I figured that the least I could do was honor these stars with customs based on the "Why Not In Hall of Fame?" subset from the 1992 Conlon Collection checklist.  How did they turn out? 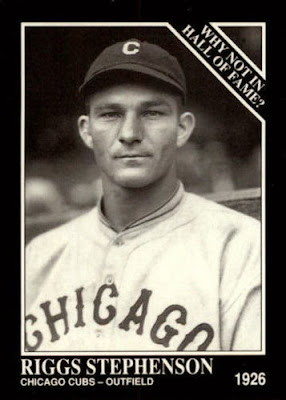 
Furthermore, there were a few others with Cubs connections who were eligible this year (Derek Lee, Matt Stairs, Davey Johnson, etc.), but the above four men were those with the strongest credentials.  Thankfully, due to their time spent with the Cubs, they should be quite used to waiting until next year.  That is, except for Lee Smith, who now falls off of the regular ballot.  Here's hoping he has better luck with the Eras Committee.

That's the thing about Hall of Fames though - debates will rage on forever and there's always going to be someone who is getting the short hand of the stick.

At any rate, again, congratulations are due to Jeff Bagwell, Tim Raines and Ivan Rodriguez.  On the other hand, good luck next time Lee Smith, Sammy Sosa, Lou Piniella, Fred McGriff and everyone else who didn't get a call this year.