I Thought We Weren't Supposed to Play With Our Food?

I may be a random trading card blogger on the internet; but, in the last 3 years of intermittent rambling, I think I have made one thing abundantly clear about myself - I love thrift shopping.  That Macklemore and Ryan Lewis track from a few years back?  Yea, that was basically written about me.  Some people like to spend their free time on the weekends in the club or hanging out with friends or family; meanwhile, I like to visit mis amigos at the local resale shops.

This past Sunday, aka New Year Day, was no different.  After feeling antsy and stir-crazy all day (a week off of work will do that to ya), I finally decided to hop in the car and roll on down to the nearby Unique Thrift Shop, in hopes of scoring some undiscovered treasures.  Hopefully of the card variety.

I was not disappointed. 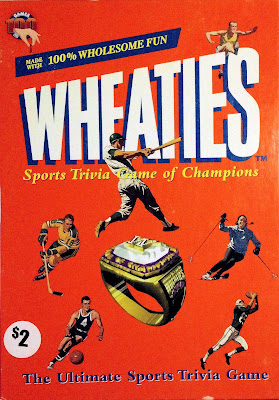 Along with my Four Seasons Christmas album (I love melodic, vocal harmonies), I came across this forgotten board game from seventeen years ago sitting on a shelf.  I love sports, I love board games and I eat way too much breakfast cereal for my own good.  In short, it definitely attracted my attention.

Although, I must admit, my first thoughts when I see a sports-based board game aren't whether or not it would be fun to play, it's whether or not there might be game-play cards with pictures of athletes that I can pilfer for my various collections...  it's an addiction.

This Trivial Pursuit-like contest, re-branded for one of the premier examples of product placement and targeted advertisement, looks like this, when it's all set up: 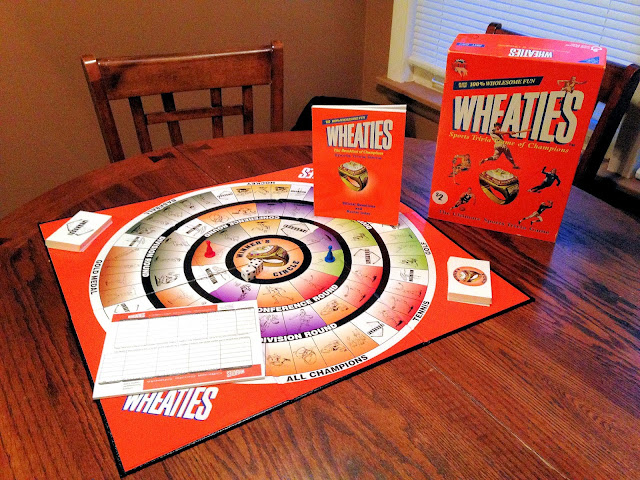 After a brief review of the rules, I'm still not entirely sure how people are actually supposed to play this game.  I do know, that if I were to attempt with my friends, it'd probably just devolve into asking each other questions from the trivia book without any corresponding board game activity.  That's just how we roll.

Anyway, what truly caught my fancy in this set up, was, of course, the stack on "Winner's Circle" cards that you can see on the right-hand corner of the game board.  In case you can't tell from the above picture, here's a close up look at what I'm referring to: 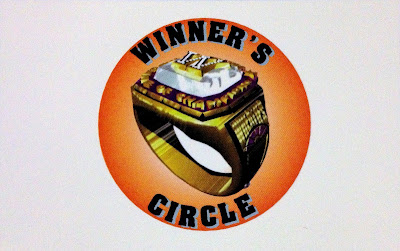 After another quick check of the rule book, these cards have something to do with selecting the type of question asked in the final rounds.  The questions are divided by sport - baseball, football, basketball, hockey, tennis, etc., etc.  You might be asking yourself, "how do these generic looking cards determine which type of athletic activity is quizzed?"  For that answer, you have to flip these business card-sized items over: 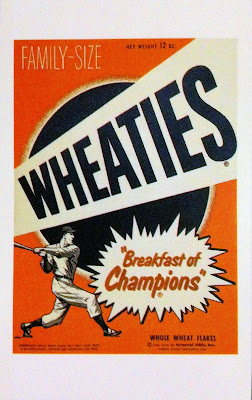 That's right, the reverse-side of these game-play cards features vintage Wheaties box designs from the days of yore.  This immediately perked my card-collecting ears.  Perhaps some of these would feature boxes which toted prominent athletes?  After all, that is the defining characteristic of the Wheaties brand, ever since they first plastered Lou Gehrig on their box cover, way back in 1934.

The first card, seen above, features a generic baseball player taking a a powerful cut while the box declares it's famous slogan "Breakfast of Champions."  Try as I might, I cannot figure out if this artwork is based on a specific ballplayer - probably not, but maybe.  What I did find out is that this design (and several variations upon it) dates back to the early 1950's. 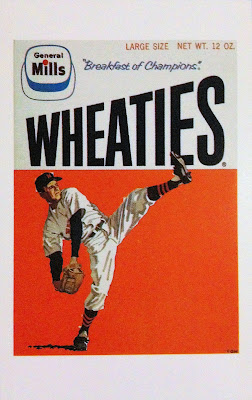 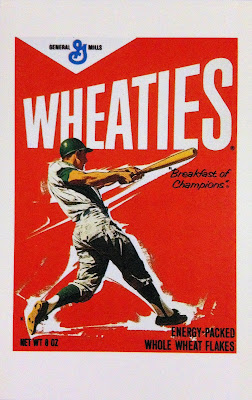 Here are two more boxes based on our national pastime.    Again, no specific player is mentioned, although the pitcher on the left is dressed in duds that remind me of either the Boston Red Sox or the Cleveland Indians.  Meanwhile, the batter on the right absolutely screams Athletics, judging by the fact that no other ballclub used green so prominently in their uniforms.

According to my research, both of these boxes date to the 1960's.

There's one more "Winner's Circle" card which featured baseball, but we'll get back to that later.  First, here are the rest of the sports: 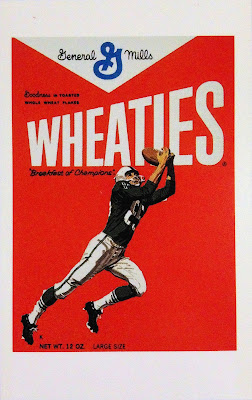 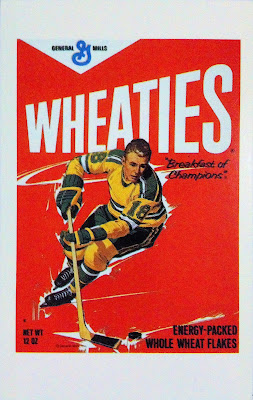 Next up, we have gridiron football and hockey, on boxes that (again) appear to date from the decade of peace, love, and harmony.  Still no specific athletes are mentioned; however, that wide receiver appears to be dressed up in New York Jets garb.  Although, the more I look at it, the less my eyes can decide whether or not that man is wearing a deep green or black... maybe it's actually an Oakland Raider?  Who knows?

As for the yellow and green hockey player on the right, is it possible that Wheaties was attempting an homage to the Minnesota North Stars?  That's what I think of when I see those colors.  I may be biased, but I feel like the Black Hawks would have been a better choice.  😇 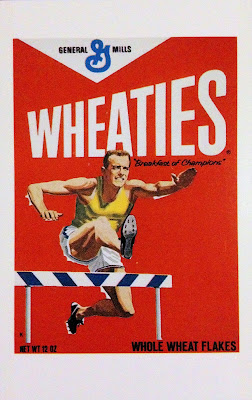 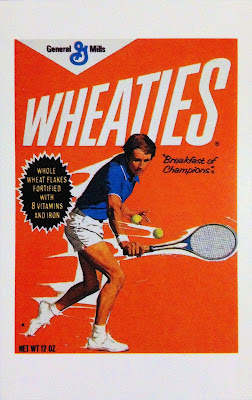 Now we're getting down to the niche sports.  That said, as a longtime track & field athlete who just started a collection of cards featuring runners, I'm quite pleased to see this hurdler show up in the stack.  This generic hurdler from the seismic sixties is sporting a crew cut, meaning it could be literally any young man in America, from the first half of the decade.

As for the tennis player, this box appears to date from the 1970's.  I know nothing about the sport of tennis, nor am I particularly interested.  Speaking of which, there's also a card featuring a down-hill skier; however, I forgot to take a picture of that one and care even less about that than tennis.  So... moving on.

As I mentioned earlier in this post, there was still one more of these cereal box cards which featured our nation's pastime.  As an added bonus, this one definitely did NOT settle for a generic ballplayer.  In fact, his name was displayed prominently upon the front: 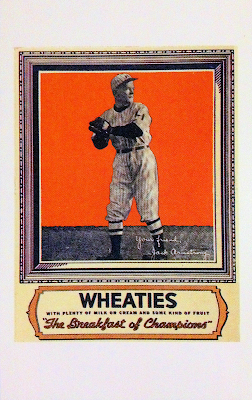 We're going back into the distant past with this Wheaties box, back to the earliest days of the product.  this layout and design was in use throughout the 1930's.  Also, it's pretty hard to tell from this scan, but that handwriting on the bottom right corner of the framed picture reads, "Yours truly, Jack Armstrong."  So, there's only one question left to answer... who the heck is this Jack Armstrong?

According to Baseball Reference, there has only been one man to reach the Majors with that name, and he was a pitcher in the late 1980's/early 90's.  Obviously, that is far too late to be the same person.  In order to find the correct answer to this question, we have to dig a little deeper. 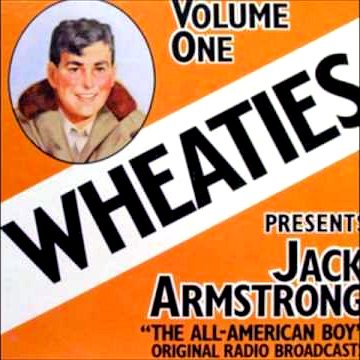 Jack Armstrong was actually the fictional hero of a radio program, crafted by General Mills as an advertising outlet for the Wheaties brand.  "The All American Boy" was a high school athlete, who played all sorts of sports, who went off on all kinds of crazy adventures, across the world.  Of course, wherever he traveled, he never forgot his Wheaties.

The radio adventure series originated from WBBM in Chicago (woo, Chi-Town!), before being carried on CBS, NBC and ABC, and aired from 1933-51.  Fun fact, a cartoon was eventually developed by Hannah Barbara in the early 60's; unfortunately, the rights to the characters could not be secured and the show was immediately reworked into Johnny Quest.

Alright - sorry, my broadcasting-nerd side is showing.  *Ahem* - back to sports. 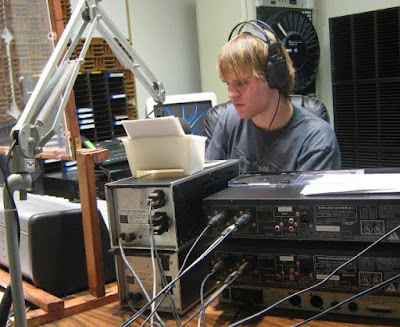 Me - during my days as a radio disc jockey.

In the end, none of the cereal box-based cards featured identifiable, non-fictional athletes.  While this is too bad, it's easily understandable - I highly doubt that the associated licensing costs were in the budget for the producers of the branded board game.  Oh well.  If anyone happens to know if these drawings were based on any specific ballplayers, runners, or skaters, please feel free to let me know.

Nevertheless, I'll still be including one of each of these cards in my stash of oddballs - the art on these old Wheaties boxes is both sports-related and fascinating.  Works for me and my card addiction!

I hope I'm not the only hopeless cardboard-aholic out there who would buy a two-dollar board game from a thrift store just so they could pillage the game-play cards for his collections.

Until next time, remember to always eat your Wheaties!