This PWE Was a Hoot!

Owls have taken over my house.

I'm not kidding, I once tried counting just how many owl statuettes, pictures, stuffed animals, drawings, t-shirts, etc. were stashed around my home and I reached double digits... before I left the living room... of our tiny apartment...  my fiancee really likes owls.

As such, if she read baseball card blogs, I certainly know which one would be her favorite:  Night Owl Cards.  It wouldn't be because he is likely the blogosphere's most prolific writer nor because of his top-notch hobby related commentary; no, it would be solely because of the Night Owl theme.

Anyway, a little while back, I posted about some 2016 Topps inserts I didn't need, of which the preeminent Dodger fan claimed "dem bums."  This lead to my very first exchange with our resident nocturnal bird of prey.

His return was top-notch; however, instead of doing a normal trade package review, I decided to spice things up.  Along with showing off the cards I received, I'll be pairing them up with a representative owl that I found within my household.

This really wasn't that hard - I had a lot of source material to pull from.  Let's go:

First up, we have a homemade birthday card from my fiancee's cousin, cut out into the shape of an owl.  This was found sticking on the refrigerator - note the bold color choice.  Purple doesn't usually pop into your mind when you're thinking about owls, either.

This purple owl majesty gets paired up with:

A couple of boldly colored parallels!

Pink and yellow don't exactly pop into mind when one thinks about the Chicago Cubs; but, I dig them - that pink La Stella especially.  Here's hoping I can add this prospect card of Jen-Ho Tseng to my Cubs All-Time Roster binder one of these days too.

Purple, pink and yellow - so very bold.  Moving on:

An inseparable pair of owl-shaped salt and pepper shakers.  These shakers aren't nearly as effective without their partner, so they always remain side by side.

With that in mind, I've matched these seasoning dispensers along with:

A "Back to Back" insert of Kris Bryant and Anthony Rizzo, otherwise known as "Bryzzo" from 2016 Topps.  These two appear to have become the best of buds, to the point of Rizzo (tongue in cheek) lamenting Bryant's getting engaged over the offseason.

Not only are they inseparable in exceptionally strong Cubs batting order, they are inseparable in friendship.  Just like a pair of salt and pepper shakers.

Some slick and shiny owl-shaped jewelry.  You know, they usually say that diamonds are a girl's best friend when it comes to jewelry; however, with this woman, I don't think it would really matter what kind of stone it is, as long as it's mounted in a strigidae setting.

I'll match these flashy pieces with:

Some super-shiny cards - it's a natural fit!

Rizzo makes his second appearance in the PWE with this Chrome single from last year.  I have very little of this product and I am generally of the opinion that it's a fairly lazy product.  But, I'll be damned if I don't enjoy them in hand - I'm a hypocrite.

I don't remember Topps Town, but this appears to be a pre-Bunt foray into the world of online collecting; I like anything shiny though.  It looks as though Garza is winding up to throw to first, a throw I can only assume sailed well-above the first baseman.

I noticed this little sentimental knick-knack above our pantry.  Family is wonderful and essential in life.  However, I don't think we look like that, nor do we have a little "owl" of our own... so...

Family doesn't have to be blood relation, of course.  It could be best buds from childhood, co-workers that you would feel lost without, or...

a team!  This team card from 2014 Heritage is a great reminder of how much more fun being a Cubs fan has been over the past year and change.  While the team may still have been tight in the clubhouse, I'm sure nothing brings a team closer together quite like continued winning.

Also, I'm totally with Night Owl on these Heritage team cards in that they would look so much better with the traditional, posed team photo; but, yadda yadda lawsuits from non-playing personnel or whatever.

What kind of owl do I have in store next?

A little statuette that protects one of the cabinets.  While this little guy is made of something cheap, statues can be made with everything from ceramics, plaster, pottery or...

marble... just like the texture of the bottom border found on 1993 Leaf.  I have to say, this is one of the most attractive base sets produced in the 90's, at least in my humble opinion.  The border is elegant and unobtrusive, the photography is decent and the overall design is reminiscent of the beloved Stadium Club.

Plus, it also contains one of the few cards of Candy Maldonado as a Cub and an excellent look at Dan Plesac's undershirt through a mesh, Spring Training jersey.

This stuffed owl head that I won for my girl at the local carnival last summer; I guess a full body just wasn't in the budget.  With her well-noted love of owls, she was green with envy over this green guy when she saw this hanging from the awning of the game stand.

You might remember this card from yesterday's post about green Cubs cards, in honor of St. Patrick's Day.  Thank you Night Owl, not only for a new-to-me Cubs card featuring heavy use of my second favorite color, but for useful blogging fodder as well.

Speaking of double, our next owl-card pairing begins with another two-fer:

I believe this piece of art was created by my little sister, as a Christmas gift to us.  Some might also say that this upcoming product is also a piece of art, worthy of framing:

I think we can all agree that Stadium Club has the finest photography in the history of baseball cards (or is at least near the top).  No matter the year, each card feels like a little piece of art in your hands; I know I almost feel compelled to display them on the wall for all to see.

This Alcantara single may not be the best example of their top of the line camera wizardry, but it still looks pretty nice and you get the gist.

Meanwhile, when my fiancee wants to look nice, she might just wear the following owl:

Back in the baseball card world though, retro has been in for quite a while now:

Throwback themed products like Topps Archives and UD's Baseball Heroes, amongst many others, have been some of the most popular products on the shelves.  As someone who began collecting cards right at the tail end of the junk wax era, seeing Starlin Castro on a 1986 design does make me a little warm and fuzzy.  Additionally, the 1959 Topps design that UD is clearly aping on the right is solidly in my top 5 favorite card sets ever produced.

All that being said, I think we can all agree that the whole retro thing is getting a little stale at this point.  Let's cover some new ground, eh?

That's an idea that as good as gold.

Or, at least simulated gold finishing, like that found on this owl potpourri holder I noticed nestled above my dresser.  I must admit, I never even noticed this thing was there until I started walking around and taking pictures.

...newest additions from 1996 Pinnacle.  This is a design that seems awfully half-baked to me, with that gold pyramid in the middle being the textbook definition of obtrusive.  If I were Todd Zeile, I'd be awfully scared to look down, lest I stab my jaw.

Nevertheless, I love any card that makes use of Wrigley's ivy in the background and the aforementioned Zeile doesn't have many cards in Cubbie Blue, seeing as he only stuck around for half a season in 1995.  Thus, these are both overall winners in my book; don't let the snark mask my gratefulness.

"Sticking" with the matter at hand, let's move along to the next bird in line:

It's a sticker!  However, my terrible puns aside, the first thing you probably noticed about this owl affixed to a door is that it's exceptionally colorful, making use of multiple clashing colors.

One baseball card set that is also fairly well-known for it's clashing colors is...

1992 Score.  Of course, Vizacaino looks pretty tame - pink and blue work pretty well with the team aesthetic - but, not all were so mild-mannered: 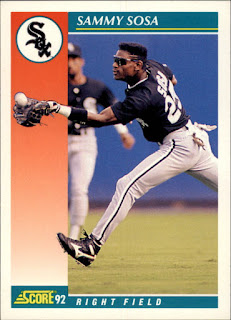 Nothing says Red Sox like purple and teal and I know I think of teal and purple when I picture the White Sox.

However, like I said, the Jose Vizcaino color scheme works pretty well here and this was a bit of junk wax that I didn't have yet; if you're scoring at home, that's another win for Night Owl.

From lots of different colors to a total lack thereof, let's move to the opposite end of the spectrum with out last owl:

a medium-sized, statue-like thing that is completely devoid of color.  I'm not really sure if this thing has some greater purpose or if it's just a display piece; one thing I am certain of is that it is an owl.

This owl is stark-white, just like the borders of the last two cards I uncovered in Night Owl's PWE:

Score really toned things down by 1996, opting for less-splashy, coordinating colors where that photo is the main attraction instead of the loco design.  This is more-than-likely my favorite of Score's flagship products.

As for the players included, Jim Bullinger always reminds me pleasantly of my grandfather due to his cursing his name when I presented him Jim's baseball card.  Furthermore, seeing Luis Gonzalez in Cubs pinstripes is a rare sight indeed.  There's a lot of good happening right here.

Just a sampling of owls I couldn't figure out how to work into this post.


To conclude, thank you Night Owl for your generosity and excellent selection in trade material.  Here's hoping this isn't our last exchange; I'm more than willing to help rid you of cards featuring one of your most despised franchises!

One thing - now that I'm fully aware of just how many owls I have surrounding me at all times, I can't help but feel like I'm being watched.  It's like an Alfred Hitchcock classic, except with a very specific type of bird.