A Winner is Announced 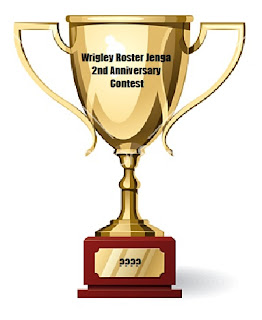 If you all remember, a couple of days ago this blog celebrated it's second anniversary.  In honor of my not completely flaking on writing over the last 730 days, I decided to hold a little contest to give away some cardboard.

Initially, I offered a bit of trivia as the entry method; but, then I decided that simply commenting would be enough to get in.  Without further ado, let's get random! 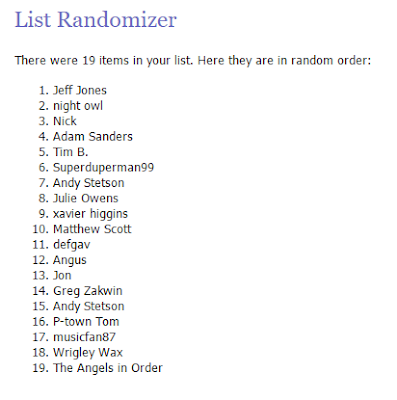 But remember, since it was the second anniversary, I stated that the list would be randomized twice before a winner was declared.  Sorry if I got your hopes up there, Jeff! 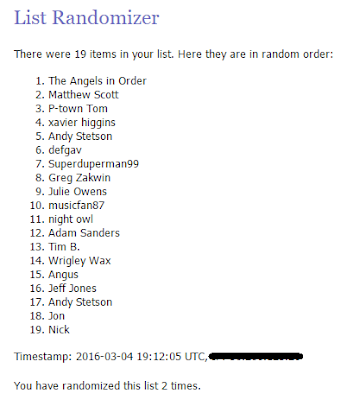 Congratulations Angels in Order!  You'll have two team bags worth of Halos heading your way next week.  Hopefully you enjoy your bounty.

Thank you to everyone who took the time to leave a comment, participate and wish me a happy blogging anniversary.  You have no idea how much I appreciate your kind words and, honestly, just your general presence on my page.  It's just nice to know that I'm not talking to myself out here, y'know?

Two years ago, I never guessed I'd stick at this for so long, nor did I figure I would make so much as one lasting connection... turns out I was wrong on both counts and I could not be happier about that fact.

In short, thank you falettinme be mice elf agin!

Email ThisBlogThis!Share to TwitterShare to FacebookShare to Pinterest
Labels: Contest