As Mystery Science Theater 3000's Joel Hodgson once boldly stated, one should "never trust a man with two first names."  Apparently, David Ross has never seen that episode of the cult classic television program because one of his top relievers in 2020 was a man with multiple monikers generally considered as firsts. 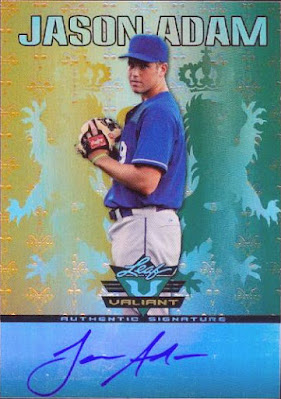 Jason Adam is something of a minor league vagabond, or at least he was before he finally made his way to Chicago.  As a post-hype reliever, who was never considered a blue chip prospect, with little in the way of  Major League credentials. it's no surprise that the hurler doesn't have much of a cardboard footprint.  In fact, unless you want to chase minor league, team-issue set singles, the only way to add a card of Adam to your collection is to dig through 2011 Leaf Metal or Valiant Draft, which are hardly mainstream products in their own right.
As you can see, I opted to chase the latter after Adam made his Cubs debut this past summer.  It's a wonderfully shiny card and has a background akin to the old Topps Crusades insets of decades past - a purposeful aping, as I understand it.  You'll also notice that I splurged on his certified auto rather than his base card.  Every now and then I decide that I deserve something nice... plus the auto was the only reasonably priced Adam card I could find on Ebay at the time.  I could have spent $12 with shipping for a basic minor league card or half as much on a certified autograph - he may be an obscure player, but that's not much of a dilemma.
At any rate, it's a beauty of a card.  Plus, with the blank, blue jersey (because, you know, Leaf has no license), you can kind of cross your eyes, squint, and see a Cubs card in your hands.  All in all, I'm pretty happy with this being the first modern Leaf revival card added to my Cubs All-Time Roster Collection.
Anyway, we've talked a fair amount about his baseball card; perhaps we should learn a little bit more about the player depicted on it's reflective surface?  Who is this man that, like Ricky Bobby, has two first names?
Adam has actually been around for a little while now, as he is now enduring his second decade of professional baseball.  Drafted by the Royals in the fifth round of the 2010 draft as a strikeout pitcher with plus velocity and movement, the hurler seemed poised to be part of Kansas City's elite, World Series cinching bullpen.  However, it wasn't mean to be, as he was instead traded away to bolster their offense in a straight up deal for Josh Willingham in August of 2014.  Since then, Adam has been unable to find a consistent groove, bouncing from the Twins to the Padres to the Royals again to the Blue Jays and missing the entirety of the 2015 and 2016 seasons due to a stress fracture in his pitching arm.  One can hardly blame him for being unable to settle in, right?
Although it was during that second stint with the Royals organization that Adam was able to finally make his MLB debut, making 31 appearances out of their bullpen long after the team had ceased to be a contender.  Still on the mend from his arm injury, he wasn't quite up to the task yet, posting an ERA well over six in those 32.1 innings pitched.  There was a glimmer of hope though, as illustrated by his 37  strikeouts over that same period.  A move to Toronto was apparently just what the doctor ordered, as after his contract was purchased by the Canadians, Adam started turning things around.  In a late season trial, Adam got into 23 games out of the pen, posting a 3-0 record with a 2.91 ERA in 21.2 IP. 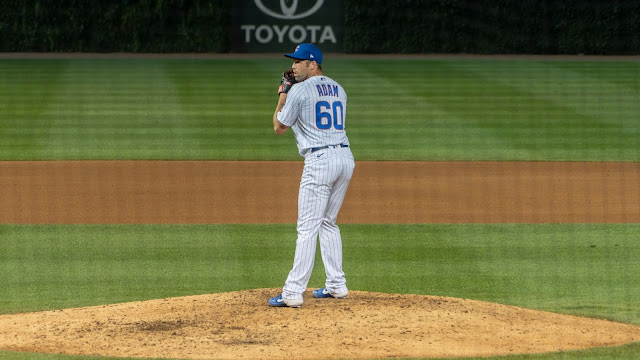 Adam on the bump at Wrigley in 2020.  Image courtesy of Marquee Sports Network.
That revitalization caught the eyes of the Cubs, who were intrigued by his pitch movement - a characteristic they have often zeroed in one when scouting pitchers.  Buoyed by a new, shortened arm action (a la Lucas Giolito, Shane Bieber and Trevor Bauer), Adam impressed in Summer Camp and eventually earned another call back to the Majors after Tyler Chatwood's season ended due to injury on August 16th.  He quickly earned David Ross' trust as he was used heavily down the September stretch to the playoffs, allowing only two earned runs the entire month (both of which came in his final appearance).  You might say that he put forth a "Valiant" effort.
Get it? Valiant... like the baseball card that I bought for his slot in the CATRC.  Look - I'm actually a father now, so I am basically contractually obligated to throw in terrible dad jokes whenever I see the opportunity.
Regardless, Adam was nails during the high-pressure pennant race.  With that performance, there's little doubt that he'll be leaned upon as a key contributor out of the pen once again in 2021; hopefully, Jason can pick up where he left off last September.  Perhaps, after all those years of drifting from franchise to franchise, he has finally found his home?  With that in mind, maybe he'll even finally get his first actual Major League baseball card out of Topps or Panini and, better yet, perhaps it will come in a Cubs uniform.
Dream big, right?
Regardless, welcome to Chicago, Jason Adam, and - more importantly - to my Cubs All-Time Roster Collection binder!