Vintage TCMA singles can be a pain in the butt to find.

Of course, the granddaddies of all oddballs were produced on a far lower scale than contemporaneous Topps, Fleer, Donruss, etc. products and catered to a much more niche market of collectors.  Advertised and sold exclusively through mail-order catalogs and other assorted hobby publications, it should come as no surprise that these oddities are much tougher to come by than their pack distributed, mass produced peers some forty years on down the road.  For me, personally, this is quite frustrating, seeing as these specialty sets are of great interest to me and my collecting needs.

Tom Collier and Mike Aronstein used their often team-centric and decade-specific sets to fill in considerable gaps in the cardboard history books.  These cards were usually very basic, with just a photograph and some type-written identifying information on the front and/or back.  Focusing on players of the distant past rather than design, TCMA sets often produced the only cards of long-forgotten baseball players of  yore... players such as: 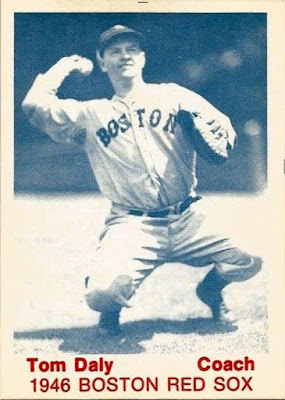 Tom Daly, seen here as a coach for the Boston Red Sox.  While the signal-caller served the longest uninterrupted coaching tenure in franchise history, this is not why I sought out this card from TCMA's 1975 tribute to the '46 Sawx.  Long before then, Daly spent the vast majority of his playing career in the Windy City, split almost equally between the South Side and North Side of town.

Originally coming up with the Chicago White Sox, the prospect was a hot commodity.  While playing for Lowell of the New England League, Daly accepted an offer from Charlie Comsikey to don the palehose.  At the same time, the Red Sox contested this transaction, citing that they had rights over the catcher's services.  The National Board of Arbitration would eventually rule in the White Sox's favor, but the other Sox would eventually land their man.... it would just take a loooooooong time!

Daly went on to serve as as a backup catcher with the Sox of White from 1913-15 before being sold to the Cleveland Indians.  After just one season with the Naps and a demotion to the minors, the Cubbies came-a-callin', purchasing his contract from Buffalo of the old International League.  After a one-game cameo in 1918 with the eventual NL pennant winners, Daly closed out his days as an active Big League player with three seasons as the Cubs' second-string backstop.  In February of 1922, Daly's contract was again sold, this time to the Los Angeles Angels of the PCL, officially marking the end of his MLB career.  That said, Tom continued to ply his trade with various bush league clubs through the 1932 campaign. 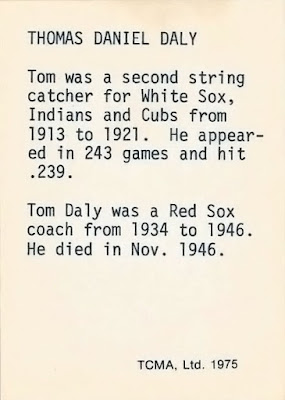 The very next year (the card-back erroneously states 1934), Daly began his career on the other side of the clipboard with the Boston American League club, who finally landed their man twenty years later.  They must have liked him around there, as his 14 consecutive years stint as a coach (mostly posted at third base) in Beantown is still a franchise record.  It sounds like he was an interesting fellow and took a particular interest in keeping his charges humble.  According to Amazing Tales from the Boston Red Sox Dugout, Daly once caught Bobo Newsom barehanded to prove that his velocity was nothing special and crammed on checkers just so that he could take down the boastful Wes Ferrell in a game where the latter claimed to be unbeatable.

Tragically, his coaching career came to an abrupt end... not with a managerial change or roster move, but due to a bout with colon cancer.  In the November of 1946, Daly lost his battle with the deadly disease and passed away at the far too young age of 54 years old.

Despite his notoriety in Boston, courtesy of that stint as a reserve with the Cubs in the shadow of World War I, Tom Daly required representation in my Cubs All-Time Roster Collection.  Seeing as his playing career took place entirely in the gap between the original tobacco premiums and Goudey gum cards, it is not surprising that the back-up's contemporaneous trading card checklist is quite limited.  During these dark days of no regular Major League Baseball card sets, Zeenut minor league issues are the only checklists that he appeared on.  Seeing as my cardboard budget is quite limited, this TCMA single was my only other realistic option.  Cheap though it may be, these specialty sets are a bear to find today and singles from these compilations are even tougher to find.

Luckily, after years of prowling dime boxes at card shows and saved searches on Ebay, I came across a copy on the latter service with PWE shipping and a "best offer" option.  Sure, Beckett will say that three bucks (plus a dollar for shipping) is an overpay, but considering how rarely I stumble upon these bad boys in the wild, I'm calling that a win. 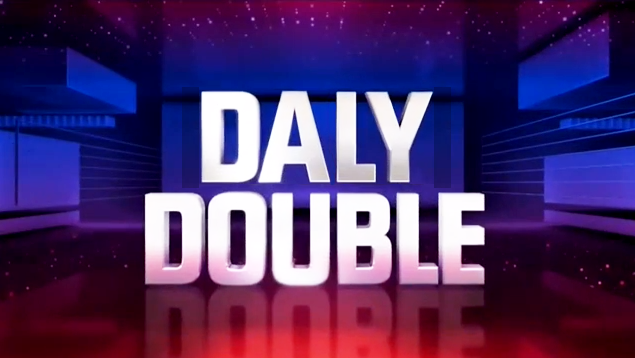 Turning back the clock even further, to the 19th century, this "other" Tom Daly originally debuted in the Bigs as part of the short-lived Union Association with the Philadelphia Keystones in 1884.   After that two-game cameo and two more years in the minors, the original Daly was promoted to the National League and served two seasons as Chicago's regular catcher and fill-in elsewhere.  Released prior to the '89 campaign as Anson sought to rid his club of rowdy influences, Daly went on to spend more than a decade with the eventual Brooklyn Dodgers as their regular second baseman, in a career that would last through 1903.


Embed from Getty Images
The first Tom Daly, near the end of his career with the Chicago White Sox, circa 1903.


Despite the fact that their playing careers weren't particularly close to overlapping, the fact that both of these men (of no relation, by the way) had the same name, often played the same position, and both played for the Cubs franchise threw a bonus monkey wrench into the machinations of my search for the latter Daly.  As if chasing an obscure oddball from 45 years ago wasn't difficult enough, my saved searches were almost always populated exclusively with Target Dodger singles of the OG Daly, as well as reprints of his 1895 Mayo's Cut plug tobacco issue, and other bits of miscellaneous ephemera - the original definitely had a larger cardboard footprint.  All in all, this just made for another layer of junk to patiently sift through. 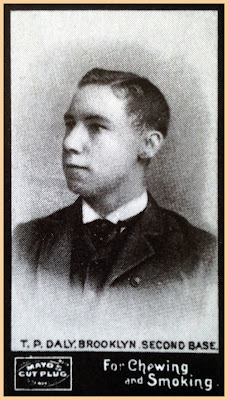 On the bright side, the other Tom Daly had already been acquired for my CATRC, thanks to an LCS purchase made about half a decade ago.  Maybe a year or two before I established Wrigley Roster Jenga, a trip to More Fun Sports Cards and Coins in Dyer, IN uncovered a complete, cello-wrapped 1986 reprint collation of the Mayo's cards.  Reprint sets are often massive boons to my super vintage, roster collecting needs, so I bought it without consulting the checklist.  It worked out well though - among the dapper 19th century players needed for my CATRC were Bill Dahlen, Jimmy Ryan, Fred Pfeffer, and T.P. Daly... better known as Tom Daly.

Now, after all this time, I'm thrilled to finally have the complete "Daly Double" safely nestled in my CATRC tome. 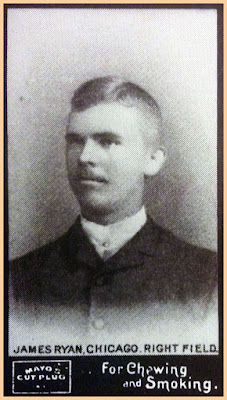 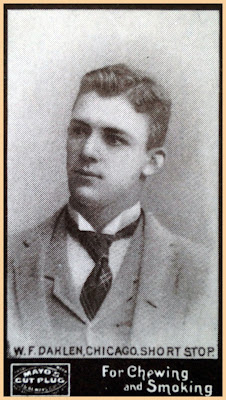 It's always a thrill to add a new name to my Cubs All-Time Roster Collection, especially so when it's a card I had so much difficulty in tracking down.  I guess it should come as no surprise that vintage oddities of obscure and forgotten men who share names and positions with fellow ballplayers of the same franchise are not particularly easy to track down.  However, that quest has finally been completed and Tom Daly (mach two) is now properly represented in my binder, courtesy of that 1975 TCMA 1946 Red Sox artifact.

Name game aside, has anyone else had the same difficulty in tracking down old school TCMA cards from the 70's and 80's or is that just me?  I find it especially difficult for certain sets too - their collaborations with Renatta Galasso, for example, seem to rear their heads far more often than their team-centric sets or decade-specific checklists.  Please feel free to weigh-in in the comment section below.

In the meantime, I'm just glad that I didn't blow the "Daly Double."