Alright - I know a pretty big trade went down last night, affecting the Cubs' roster in a major way. However, I'm still buzzing from the weekend and I want to keep showing off my haul from this past weekend's National Sports Collectors Conference, otherwise known colloquially as "The National," for short.  It was an amazing and overwhelming (in a good way) experience, despite my apparent concerns leading up to the Chicago-hosted event. I highly recommend that anyone who enjoys our nation's pastime or any of our major sports to circle this event on their calendar in the future.  It's simply amazing.

Anyway, I was able to add 13 new names to my Cubs All-Time Roster Convention while wandering around in awe at the Donald E. Stephens Convention Center.  At an event of this magnitude, a lot of the focus was on super vintage collectibles - i.e., crazy stuff like authentic Goodwin tobacco cards,  PSA 10 Ted Williams rookies, complete sets of 1952 Topps, and the like.  A good majority of my purchases were of the super vintage variety; however, they weren't quite THAT notable.  In fact, the finds that I'm about to show off weren't even baseball cards, in the traditional sense, anyway. 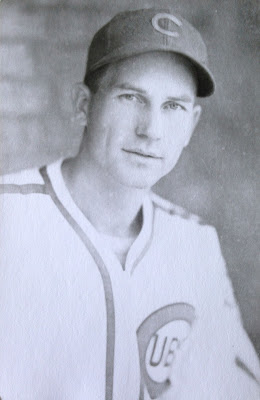 When you're searching for obscure baseball players from the early-to-mid-20th century, you have to take what you can get.  There were no Bowman or Brandt minor league, team-issue sets issued every year to fill in the gaps for the cuppacoffee rookies or journeymen who never sniffed significance.  In fact, there was a certain dearth of baseball cards at all, except for the notable sets.

The photographic postcard that you see above spotlights one of those rare players, a hurler by the name of Ray Harrell.  Harrell pitched for five teams in six years of Major League action during the mid 30's and early 40's, with a career ERA of 5.70 - not too notable.  However, what is notable to me is the fact that one of those five teams was the Chicago Cubs, who employed his services for all of 4 games (2 starts) in 1939.  Even those his ERA ballooned to over 8 in that tenure, he was still a Cubs and thus necessitated representation in my CATRC binder.

I am a bad Cubs fan though because I definitely had no idea who this player was when I ran across it.  Thankfully, either the printer, manufacturer or previous owner recognized that the lack of identification on the front might become an issue, so they kindly inked Ray's name on the back for wide-eyed and curious ol' me: 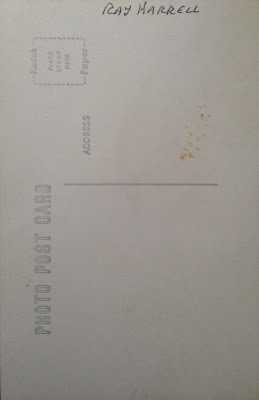 Unsurprisingly, Ray never had a contemporary card issued; although, he did appear on the checklist of the Conlon Collection in 1993... as a Cardinal... that'd never do.  That's why I was thrilled when I came across this vintage photo postcard, even if there was no hint of a photographer or printer and it was priced at ten bucks.  Luckily, I discovered that I am capable of haggling when I am on a strict budget (I lost my debit card earlier in the week - couldn't get more cash) and was able to talk the generous-minded vendor down to five, a much more reasonable price.

After all, while I absolutely wanted to cross Ray's name off of my want list, I didn't want to forfeit a large chunk of my budget on my first significant purchase, not at a place like that National.  It's a damn good thing I didn't too because it wasn't long before I ran into more postcards that fit into my favorite and most hallowed binder. 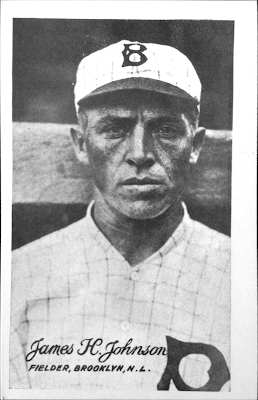 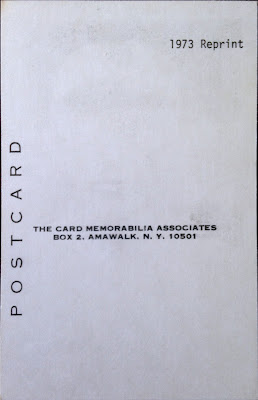 Just a few aisles over, I found myself flipping through a full binder of old-timey postcards, one of which turned out to be a pressing need.

James "Jimmy" Johns(t)on was a much more significant player than Ray Harrell, serving as a regular in the Brooklyn Dodgers/Robins lineup, at various positions, for a decade.  That said, before that, you guessed it, he had himself a brief cameo with the Cubbies in 1914, with a fifty game audition that resulted in a weak .228/.264/.327 slash line and a ticket back to the bushes until Brooklyn came a-calling in '16.

Unlike the previous postcard, we can clearly determine the origins of this vintage oddball.  From the front, it's apparent that we have the design of one of the earliest sets of Exhibit cards (and the gloriously awful flannel Dodger uniform tops).  From the back, we see that it's the postcard back version and that it's not an original; rather, what we have is a TCMA reprint from 1973.  Hey - TCMA is one of the biggest names in oddball trading cards and enough time has passed for this single to be considered authentic vintage in it's own right now.  As an added bonus, I didn't even have to haggle for this one, as the vendor had it marked at a reasonable three dollars - considering I almost never come across Exhibits, reprint or not, I was happy to take Jimmy home at that price.

Later on in the afternoon, after I had my made way through the entire convention hall and was doubling back to follow up on some potential buys that I had to mull over, I came across a table that I must have missed entirely during my initial run through.  This seller's stock was made up almost entirely of postcards from the 1900's. His table was strewn with George Brace, JD McCarthy postcards, team issued oddities, and Exhibits from the 1930's through the 1970's.  Sensing a potential lucrative source for more obscure Cubs, I instantly put my previous mission on hold and began to flip through the first stack I saw, which just so happened to be made up entirely of Northsiders. 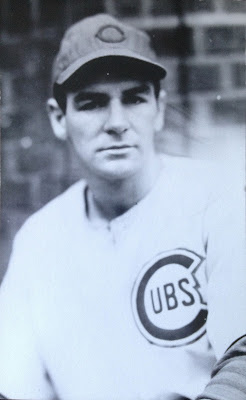 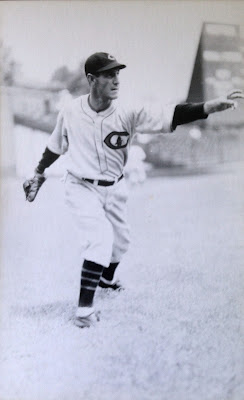 Like with the Harrell card which led off the post, these again were real photo postcards (printed with Kodak paper) of unknown origin.  Again, my ability to identify players by nothing but sight was challenged and, again, I was thrilled that the names of the subjects were scribbled on the reverse side. 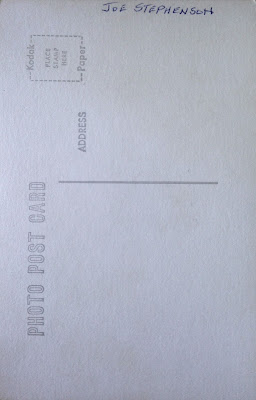 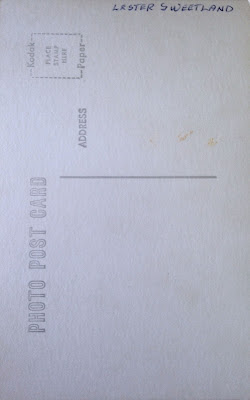 The stern head shot appears to be Joe Stepehenson, while the warm-up "in action" photograph appears to depict Lester "Les" Sweetland.  Stephenson appeared in all of four games for the Cubbies, back in 1944, batting an anemic .125 as a backup catcher.  He also saw brief snippets of action with the White Sox and the Giants in the years immediately preceding and proceeding his Cubs tenure; but, that was the extent of his Major League Baseball career.

On the other hand, Les Sweetland was considerably more notable of a player; however, his notoriety was not for any reason that a pitcher would like to be remembered.  Throughout the long and storied history of MLB, no moundsman, qualifying for the ERA title, has posted a higher ERA than Sweetland's 7.71 with the 1930 Phillies.  Egad - all told, Les had a dismal 7-15 record in 34 appearances, 25 of which came from the starting rotation. 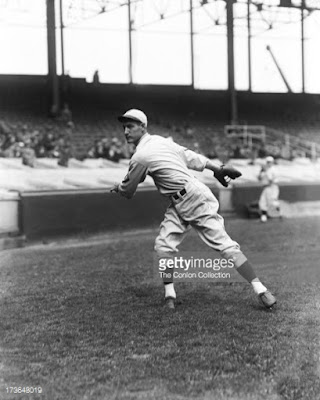 Lester during his time in the City of Brotherly Love.  Image courtesy of Getty Images.


Nevertheless, the Cubs thought they saw something in Sweetland, purchasing his contract coming off the heels of that disastrous campaign.  The good news was that "Sugar's" ERA dipped by more than 2.5 points and he managed a decent 8-7 record for his new club.  The bad news was that, even with that his improvement, a 5.05 ERA just wasn't going to cut it and he frequently clashed with the irascible manager, Rogers Hornsby.  In the end, his 26 games with the Cubs that season were his last on the game's grandest stage.

These buzzer-beating finds made fora perfect punctuation point on an already supremely successful day; however, they were priced at three-for-five bucks and there were only two that immediately appealed to me.  Seeing as I would probably never see anything like these postcards anywhere else (esp at that price), I decided that I wasn't leaving until I uncovered a third oddity. 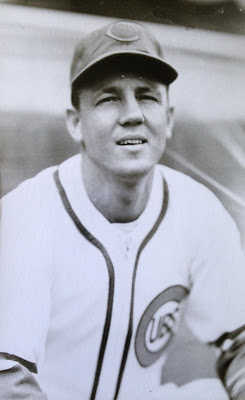 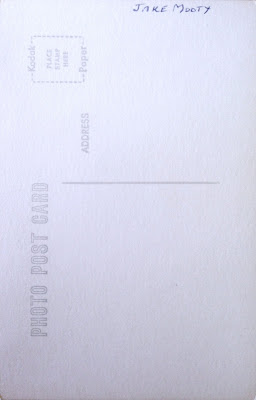 Enter Jake Mooty, a "War Era" pitcher for the Chicago Cubs from 1940-43, who also cameo-ed with the Reds and the Tigers.  This one slipped past me on my initial run through of the postcards because the name seemed familiar - nevertheless, something rattling around in the back of my head told me that the point of checking was not "Mooty."  Bah-dum-tiss!

After a quick run through of my records (thank goodness for smart phones), I discovered that the reason Mooty's name was familiar was because he did, in fact, already reside in my CATRC binder.... with a catch: 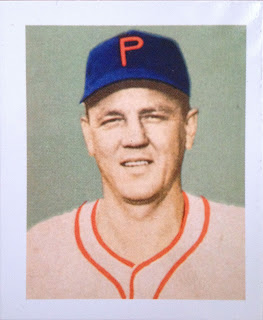 The 1949 Bowman PCL reprint which occupied his spot obviously does not show him in a Cubs uniform... heck, it's not even a Cubs affiliate.  Thus, with my third postcard selection from this table, it was time to "Cubgrade!"

With that, we've now covered all of the vintage postcard purchases that I made at the 2017 National Sports Collector's Convention.  In re-purposing these mailers, I was able to add four entirely new names to my Cubs All-Time Roster Collection binder, as well as one coveted "Cubgrade," as well.... and that's just from postcards.  Tomorrow, I'll cover the next major segment of my national haul - this one involves another major name from the oddball baseball card market - Renatta Galasso.

In the meantime, time to go back to monitoring the wire - it's deadline day and, despite the Cubs having already made two major deals this July, you just never know what's going to happen.  I might just go "postal" trying to keep up!