The Federalist Takes the Mound

Well, yesterday was a mostly terrible day to be a Cubs fan.  In a makeup game from an earlier rainout (that's a big debacle in and of itself, btw) against the NL Central Division-leading Milwaukee Brewers, the Cubs pitching staff promptly wet the bed.  Mike Montgomery started the misery off by giving up 7 earned runs in just 2.1 innings with two walks.  Then, Jack Leathersich made his Cubs debut (and, quite possibly, his Cubs finale) by promptly walking four men and giving up 2 further runs before he could get out of the ghastly frame.  All told, by the end of the day, the Cubs were blown out 11-2 by their key divisional rival, putting them 4.5 games behind the Brew Crew.

Jon Jay moved from centerfield to the pitcher's bump in order to pitch the top of the ninth inning and take some strain off of the beleaguered bullpen, which had to sop up 7 frames.  The emergency pitcher role had been previously filled by Miguel Montero, but you know how that story ended up.  Although, I'd be curious to see if he put his money where his mouth is and use a prompt delivery while on the mound.

Anyway, Miggy wasn't around anymore and Joe left it up to Jon Jay and Tommy LaStella to decide who would come in.  Apparently, Jay won a game of "rock, paper, scissors" (really) to earn the call from the pen... errrr... outfield.

Jon Jay (Cub-Jingleheimerschmidt), to the best of my knowledge, has never taken the mound at any level and isn't known for a strong arm in the field either.  But, because baseball, the pitcher-for-a-day recorded a scoreless inning on the strength of his 47-mph change and "blazing" 66-mph fastball.  I suppose if you're all geared up and trained to swing at pitches between 85-100-mph, that kind of velocity drop really screws with your timing.  He's no John Baker, but he'll do. 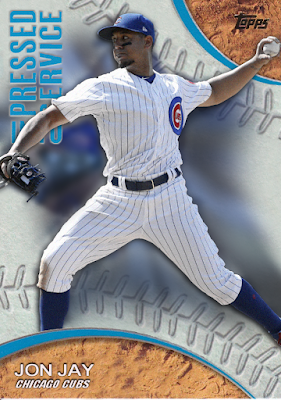 At any rate, I felt that "The Federalist" deserved to have a card made in honor of his mound exploits; it's not quite Topps Now-worthy, so a custom from Wrigley Roster Jenga will have to do.  Therefore, I decided to use the design from last year's Flagship insert, "Pressed Into Service" as the template for my new creation.  An obvious choice, this set focused on - you guessed it - position players being "pressed into service" on the rubber.

I'm pretty satisfied with the way the front turned out; however, matching the fonts was no easy task and they aren't quite perfect.  It is what it is.

Unlike my last custom card, where I required the assistance of a friend of the blog for the creation of a proper backside, I made sure to whip one up this time: 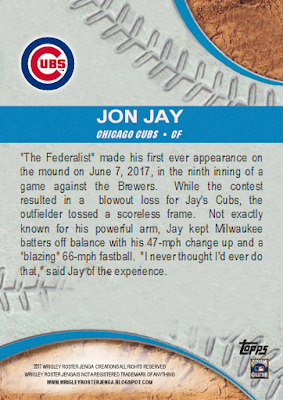 There - now we have a complete "card."

In the end, I think we can all agree that position players pitching will always capture our attention, even if it means our personal favorite club is getting hammered.  I truly hope this insert set makes a comeback at some point, as there have been several more instances of fielders taking the hill since it was first released.  Jay, Montero, former Cubs Darwin Barney and Andres Blanco, Alexi Amarista, Nori Aoki, and so on and so forth.  It's definitely one of my favorite inserts of the recent past and I sure wouldn't mind having some Cubs to chase..

In the meantime, I suppose my custom will have to do, just like Jon Jay had to do for that ninth inning.  Although, here's hoping the Cubs play better today against the Pirates; as fun as it was to make, I don't want to have to whip up another one of these tonight.

Let's keep "the Federalist" where he belongs - in the outfield.

Email ThisBlogThis!Share to TwitterShare to FacebookShare to Pinterest
Labels: Custom