My Memory Ain't So Keen

I am a forgetful person - this is a fact that I came to accept a long time ago.  If you were to ask anyone close to me in life, they would definitely tell you the same.  I think my fiancee has given up on me ever remembering to feed the cats and my friends don't even bother telling me about events anymore - they go right to my better half because she never forgets... ever.  To top it all off, my father constantly tells me that I'm bound to be fun to deal with in my old age.

On that note, the newest card to be added to my Cubs All-Time Roster Collection is a mystery to me.  Not because I am unaware of the player or the checklist - au contraire - in fact, the card was on my most wanted list and it hails from what might be my favorite modern day baseball card set, the Conlon Collection: 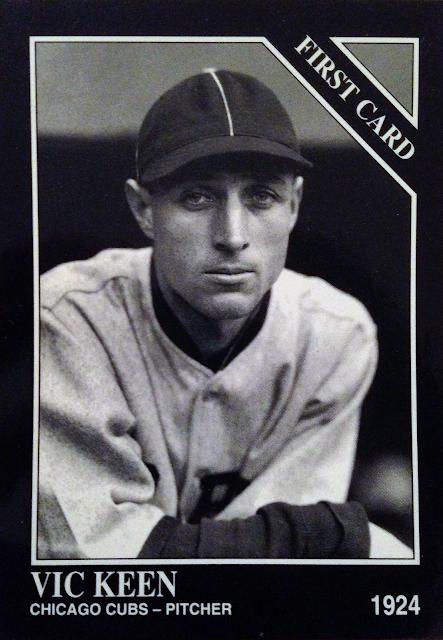 Vic Keen pitched for the Cubs from 1921-25 as a reliable workhorse of a swingman, before being traded to the Cardinals and winning a World Series ring in 1926.  As you can plainly see, thanks to the notation in the upper right corner, this is Vic's very first (and only) baseball card, making it a must have for my CATRC binder.  Again, Conlon comes through in the clutch with an obscure player from days long gone by.

Thus, it is not the card itself that has me feeling forgetful; rather, it is the source.

You see, this uber-generous gift arrived to me in the mail, from nearby, suburban Skokie, in a plain white envelope with the following message:

The only thing is, I don't know a Tom from Skokie.  Also, the only Tom that I'm familiar with that has a blog is P-Town Tom, who obviously hails from Peoria (aka P-Town) and not Skokie.  Of course, this could easily be my forgetfulness rearing it's ugly head, yet again.  Clearly, this person has my address (and good tastes in card sets), so we must have interacted before - I just cannot remember when, where or how.

This is embarrassing.  If anyone on the blogosphere has a clue relevant to this mystery, please let me know so that I can give this generous gentleman proper credit and thank you.

In the meantime, while I might not know exactly who sent me this long-needed card, I do know who is featured on it.  With that in mind, let's take a deeper look at the career of Howard Victor "Parson" Keen, shall we? 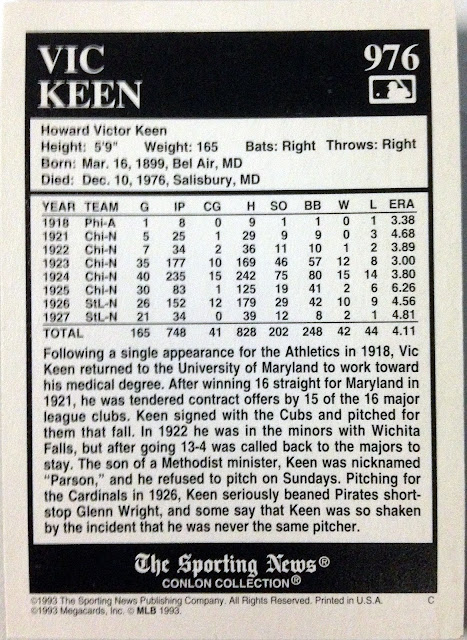 In case you can't read that tiny (and slightly blurry) text, here's what the back of this Conlon single states:

"Following a single appearance for the Athletics in 1918, Vic returned to the University of Maryland to work toward his medical degree.  After winning 16 straight for Maryland in 1921, he was tendered contract offers by 15 of the 16 Major League clubs.  Keen signed with the Cubs and pitched for them that fall.  In 1922, he was in the minors with Wichita Falls, but after going 13-4 was called back to the Majors to stay.  The son of Methodist minister, Keen was nicknamed "Parson," and he refused to pitch on Sundays.  Pitching for the Cardinals in 1926, Keen seriously beaned Pirates shortstop Glenn Wright, and some say that Keen was so shaken up by the incident that he was never the same pitcher."


In case you were wondering, that one team that didn't make a contract offer was the Pittsburgh Pirates - a funny coincidence that they should be the team involved in the incident which rattled him out of the league.  Also, despite his apparent dedication to earning his medical degree, he never did complete his studies. 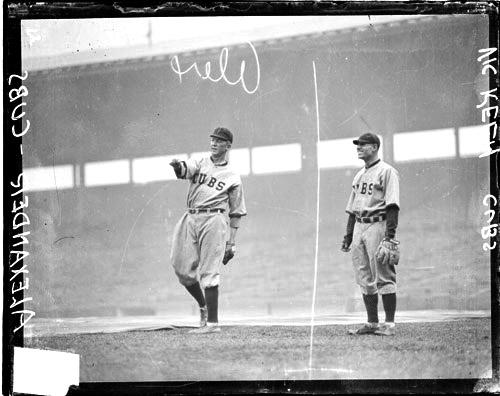 Keen and fellow Cubs hurler, Pete Alexander.  Both were traded to the Cardinals on the same day, in separate transactions.
Image courtesy of Chicago Daily News, Inc.

Again, if anyone out there reading this has some information that will help me fill the gaps in my swiss cheese-like memory, I'd greatly appreciate it if you were to let me know.  This kindly Tom deserves proper credit for his good deed.  Also, if you're reading this, Tom from Skokie, please don't hate me for being so forgetful.  The unexpected gifting of Keen was greatly appreciated and I was overjoyed to be able to cross another name off of my "most wanted" list.

While I sit back and wait, maybe I should check the cats' food dishes... I may very well be forgetting to feed them again...