First of all, I hope everyone reading this had a Merry Christmas and that Santa Claus was nice to you. But, never again.

Never again am I waiting until the last minute to do ANY Christmas shopping. Between dealing with the crazy, blood-in-their-eyes shoppers, the demolition derby that was the main roads and the crummy weather, I wasn't feeling particularly cheery on the day before, the day before Christmas.

I'm usually pretty good about getting my seasonal shopping done.  This year, not so much and I have no excuse.

However, it wasn't all terrible.  I made a quick pit stop at the local Goodwill to browse, as I am want to do from time to time.  It was a fruitful endeavor, even though I didn't come across anything for anyone still on my list, as I walked away with a few gifts for myself:  a pair of playable LP's from their "well-loved" record bin - James Taylor's Sweet Baby James and John Denver's Greatest Hits.  Plus, I also scored a jersey from a former, nearby minor league team: 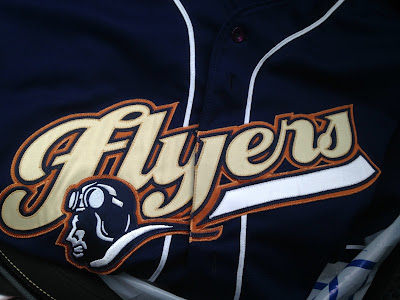 The Schaumburg Flyers were members of the Independent Northern League from 1999 through 2010, playing their games at Alexian Field, just a few miles away from O'Hare Airport (hence their name).  Fun fact - the land upon which this suburban team's home park was originally purchased with the intent of luring the Cubs, in the event that the franchise was unable to bring night baseball to Wrigley.
In the course of their history, the Flyers never won a title and were eventually folded after tax issues with the local government.  Later, they were replaced by a Frontier League club, the Schaumburg Boomers, in 2012.

Anyway, finding what I presume to be a game-used, minor league jersey of a familiar club for chump change at a thrift shop definitely brought a smile to my heretofore frustrated face.  That said, there was even more than what meets the eye: 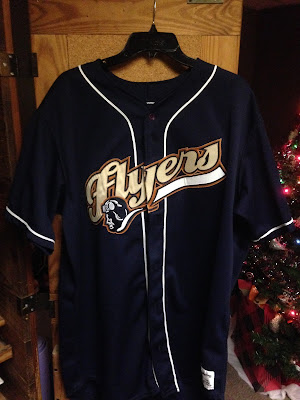 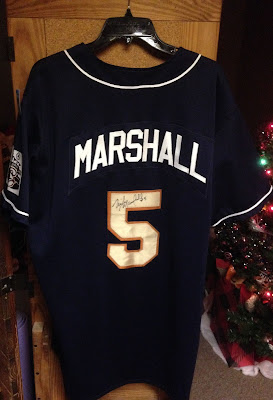 As you can see, we have a name.  Not only do we have a name, we also have what appears to be an autograph.  Let's take a closer look at that, shall we?: 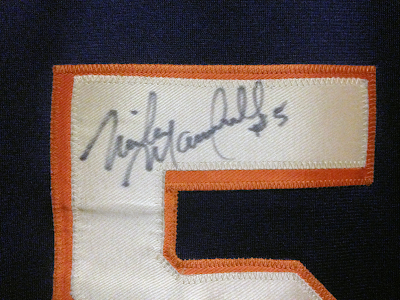 This made the purchase all the more intriguing.  I assumed that this was just some indy league, non-prospect who maybe got a brief taste of affiliated ball; but, otherwise, was not exceptionally notable.  After all, the Northern League is about even with Low A on the MiLB ladder; in other words, a long, long way away from Major League Baseball.

Researching exactly who this "Marshall" fellow was was made easy by the fact that this uniform top included a nifty patch on the right sleeve: 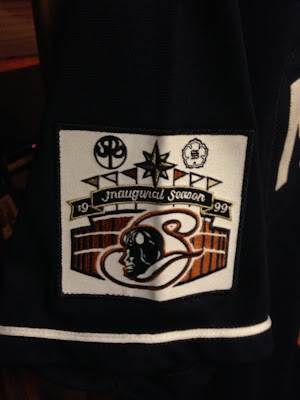 Presumably, this dude played for Schaumburg during the franchise's first year in the city's northwest suburbs.  Armed with that information, it was easy to look up the team's initial roster on Baseball Reference.  Making things even easier, was the fact that there was only one Marshall on that 1999 active roster... and that's where this purchase got even cooler. 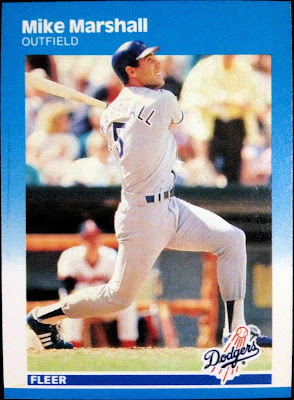 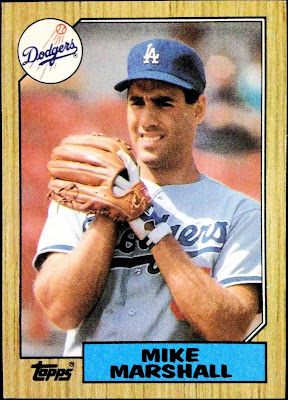 Not to be confused with the pitcher of the same name (who also spent time with the Dodgers), Mike Marshall was drafted by the Dodgers in the sixth round of the 1978 draft out of close by Buffalo Grove HS in Libertyville, IL.  The local hero rose through the ranks, ascending to the Bigs in 1981 and staying there through the 1991 season.  Along the way, Mike became the (mostly) regular right fielder in LA and, as a key piece for the 1988 World Champs, paced the club with 82 RBI and was second with 20 home runs.

Unfortunately, Marshall also carried a reputation as a softy and missed a lot of time with general injuries throughout his career, leading to confrontation and consternation with his teammates and manager Tommy Lasorda.

Even still, finding the John Hancock of a World Series winner on the back of a game used uniform in Goodwill seemed too good to be true.  Let's examine that autograph, just to be sure: 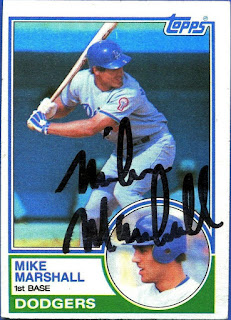 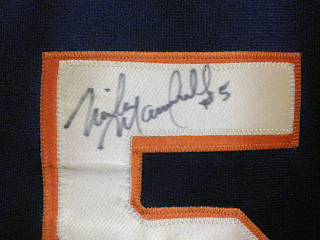 On the left, we have an IP autograph of the Dodger semi-star (he has no certified autos, to my knowledge) and on the left we have my find.  They look pretty darn close to me and I don't know who has the time to forge signatures of Mike Marshall on the back of obscure, indy team jerseys.  I'm calling this one legit.

Now, you might be wondering, what brought this guy to the Schaumburg Flyers?  You see, his reputation for being unable to play through injuries eventually led to his ouster from affiliated baseball.  After a year spent in Japan (1992), Mike found himself on the outside looking in, estranged from the game he loved.

That is, until seven years later, when the Flyers made it known that they were looking for a player-coach to round out their roster. 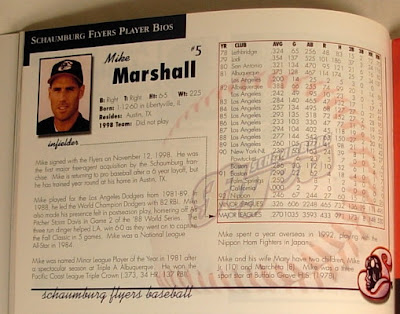 Mike's profile in the 1999 Flyers' yearbook, swiped from Ebay

Marshall's status as a local product and a recognizable name likely played a role in his getting the position; gotta put butts in the seats, after all.  That said, as a 39-year old first baseman with a considerable layer of rust, Mike posted a respectable .307/.358/.423 slash line across 33 games in his last year as an active player.  From there, Marshall was able to parlay that success into coaching and management jobs all over the independent league map.

Unfortunately, to this day, Marshall still has not been able to break back into the organized ranks.  A call to the Dodgers lead to a request for his resume and an invitation to throw out the first pitch at a Dodger Stadium contest was rescinded due to a Latin-themed promotion.  Maybe someday.

Overall, I'd say this fascinating piece of baseball memorabilia was worth the six dollar price tag; easily one of my best thrift shop deals ever.  In contrast, I could have layed down ten bucks on a 660-count box full of junk wax.  I think I'm happy with my choice.  It'll look quite nice with my modest jersey collection, which includes a couple more indy league uni's: 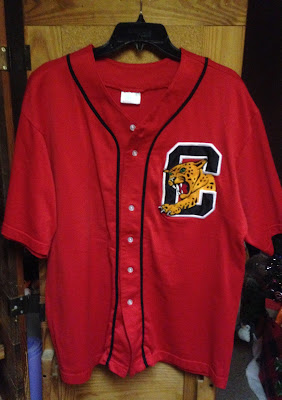 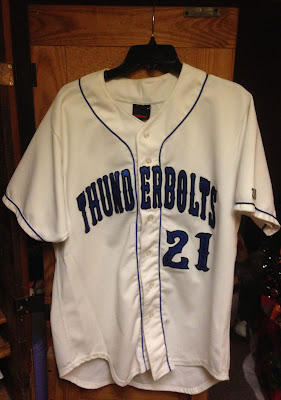 My new, signed Schaumburg Flyers jersey will hang proudly with my game-used Cook County Cheetahs and Windy City Thunderbolts tops.  The Cheetahs and Thunderbolts represent both iterations of the hometown minor league team, which plays in the Frontier League.  The club originally went by the Cheetahs moniker, from 1997-03, before "modernizing" with the "edgy" Thunderbolts name, which is still in use today.

The Cheetahs jersey was actually another thrift shop find, while the T-Bolts top was a gift from a family friend.  Unfortunately, I have no idea what player sported either one, as neither has name on the back or a helpful, dated patch.

And so, with that find, I suddenly found myself in a much better mood, ready to plunge into the crazed-crowd at the local Target to get the last of my last minute, "white elephant" party gifts.  I'm happy to report that the person who ended up with the Bluetooth, disco-ball speaker and "A Country Christmas" CD is thrilled with their selection and i am just as giddy about this Mike Marshall jersey that's sticking with me.

Sometimes, you just have to treat yourself.