Lackey, Zobrist, Heyward... the big names just seemed to keep rolling into the Windy City this winter.  That trend continued when the Cubs inked themselves an intriguing young righty to a deal yesterday afternoon: 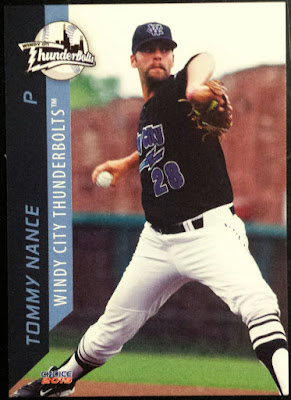 Okay, so I MAY have been exaggerating a TOUCH in my leadup there... okay... I was exaggerating a ton.  Sorry, I was born too sarcastic for my own good.

The Cubs signed this 24 year arm out of the independent leagues for nothing more than minor league depth; the reliever posted a 4.74 ERA in 29 appearances in unaffiliated, low-A-like competition.  Every organization has dozens of openings to fill every season and not every player is going to be a blue-chip prospect, after all.

So, why do I care about Tommy Nance?  The Thunderbolts have been a part of the Midwest based Frontier League since 2004 and the franchise has existed in some form or another since 1997.  They play their home games in the next town over from my hometown, Crestwood; thus, they are, for all intents and purposes, my hometown team.  So, to have a player from my hometown team move into my bar-none, favorite sports organization is a pretty nifty development to me. 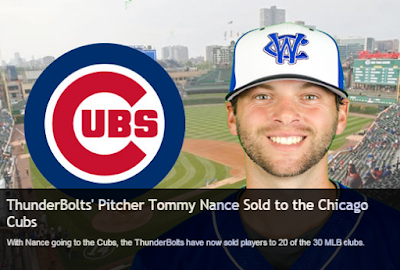 
This is actually the first time that the Cubs have dealt with the 'Bolts too.

When I read about this signing on my Twitter feed (because I'm always desperate for Cubs roster news), I immediately went to my stash of Thunderbolt team sets to see if I had his card.  As you might have figured out, I do.

In doing so, I figured this would be a grand time to show off some of the more interesting cards from my team-issued oddities.  I mean, one doesn't see many independent league cards on the blogosphere; so, why not?

Usually given away at a late-season home game, the date is usually one of the most popular games on the schedule - kids still love free baseball cards.  The oldest collation that I have is from 2004: 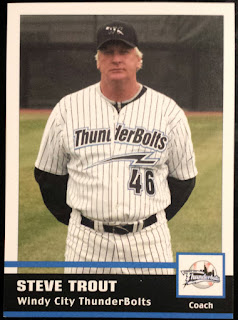 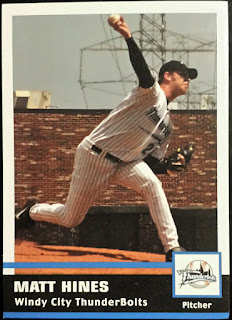 The name on the right should look a lot more familiar than the one on the left.  Steve Trout was both a member of the 1983 "Winning Ugly" White Sox and the beloved, playoff-drought busting 1984 Cubs.  As such, he's a pretty well-liked figure in Chicago sports.  I'm sure that the 'Bolts took this into consideration when offering him the job as their pitching coach.

I've told the story of how my attempt to get Trout's autograph nearly got my ass-kicked.  Somewhere in storage, I also have a signed bobblehead that the team gave away that season.  See?  People came to catch Trout. * rimshot*

Meanwhile, I also chose to show off Matt Hines because he too has Cubs connections.  The righty was originally drafted in the 20th round by Chicago in 2002 out of Olivet Nazarene University (same conference as my alma mater).  He made it as high as A ball before finding himself on the Windy City roster. 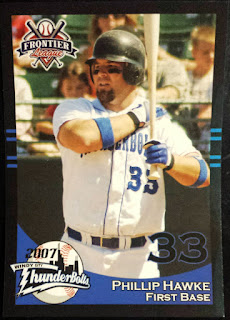 There weren't really any significant players in this particular set; just some who played a little in affiliated ball, but never made it all the way up to the ladder or into the Cubs org.  So, I went with a couple of local favorites from the time.

Phil Hawke came out of the Rangers system to provide the power for a team that won back-to-back league titles in 2007 and 2008, peaking with 22 homers in 96 games in the latter campaign.  Meanwhile, Mejia spent 4 years in the Tigers organization (he even got himself into a Bowman checklist) and then, in perfect symmetry, played 4 seasons for the Thunderbolts as their regular second baseman. 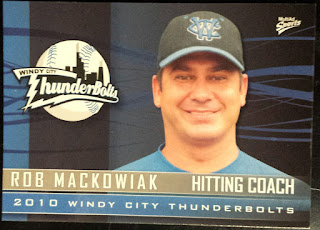 Again, we skip a couple of years and move into the 2010 set.  Clearly I didn't always make it a priority to attend the card giveaway game.  However, this one is probably the most interesting, name-wise.

Mackowiak played in the Big Leagues for 8 years, including 2 seasons off of the bench for the White Sox, was born and lived in the area, and played his college ball for the local community college.  I'm sure all of this played into his getting the hitting coach job.  Buy local! 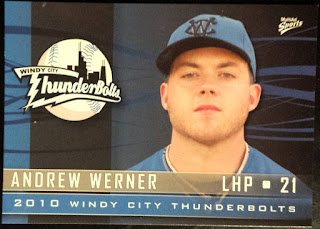 Andrew Werner might sound familiar to you because he is one of a select few 'Bolts players to make it all the way up to the Big Show.  After going 10-4 with a 3.71 ERA in that 2010 season, Werner parlayed that success into a contract with the Padres.  He eventually ascended to the top of the ladder to start 8 games for the club.

However, as of 2015, Andrew finds himself back in the Indys with the Ottawa Champions of the Canadian-American Association. 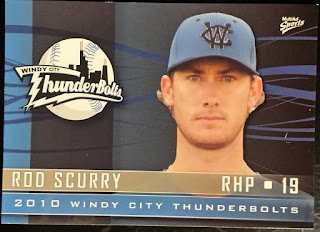 This one really caused me to double-take as I was flipping through the stack.  Obviously this isn't the same Rod Scurry that made his name for the Pirates in the 80's; he tragically died of a cocaine-induced heart attack in 1992.

In fact, this is actually the elder Scurry's son, who came to the Windy City after a brief stint in the Rockies organization.  Pretty cool to see such a name on the roster, although I have no memory of his being in town. 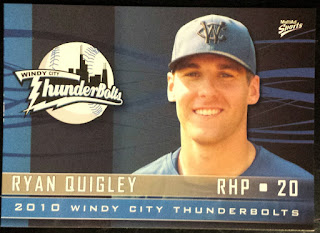 More familial ties here - however, this situation is only notable to me.  A friend of mine from college, who played on the tennis team and was a reknowned gymnast bore the last name Quigley; when I flipped this card over, I saw that these two attended the same high school.  Hmmmm....

Turns out that this wasn't just some crazy coincidence, I'd actually cheered for my friend's brother on the diamond and didn't even realize it.  The athletic gene is strong in this family, as their sister was actually named the Sixth Woman of the Year in the WNBA last season for the hometown Chicago Sky.  Wowzer. 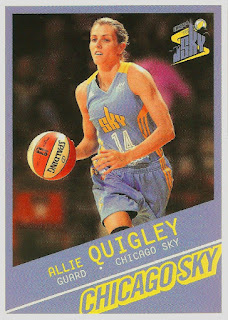 If anyone has a copy of this '15 Rittenhouse single, I'll gladly trade.

Back to the subject matter at hand, let's crack into the 2013 edition of the Thunderbolts team sets: 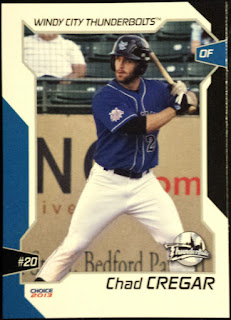 Chad Cregar was drafted by the Chicago Cubs in the 47th round of the 2008 draft as a junior out of Western Kentucky University.  However, unless you're Mike Piazza, getting drafted that low usually doesn't pan out in the long run, so he didn't sign.  Still, any Cubs connection is notable to me.

He did up his draft position to the 15th the next season, courtesy of the Marlins; that said, you can tell how that worked out for him since he appears in this set 4 years later. 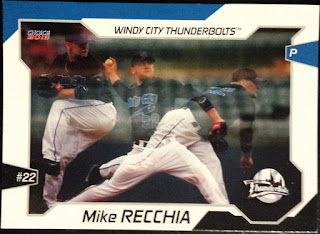 Mike Recchia really didn't do anything notable in professional baseball; but, I think it's pretty obvious why I chose to show off this card.  While many minor league issues are plagued with crummy, uninspired, or out of focus photography, this single goes above and beyond.

We rarely see the multi-exposure shot outside of 90's cardboard, making this find especially welcome.  Somebody was feeling creative or wanted to play around with Photoshop that day. 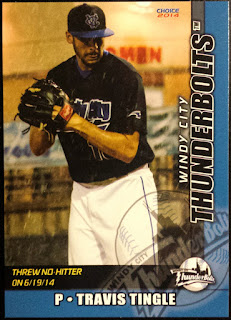 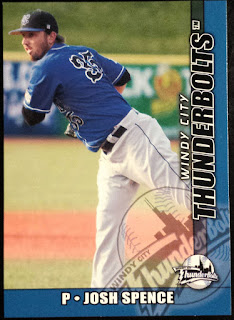 Speaking of interesting photography, 2014 brings a Tingle single (say that five times fast) that is just "dripping" with awesome.  What's more badass that tossing a no-hitter in a driving rain storm?

Josh Spence might say making it all the way to the Major Leagues, that's what.  Like the earlier-mentioned Andrew Werner, Spence got a trial with the Padres, becoming a key cog in their bullpen for the '11 campaign (2.73 ERA in 40 apps).  Unfortunately, things went down hill quickly for the reliever, as he found himself out of affiliated ball by 2014.

Finally, we close things out with another card from the Tommy Nance headlined 2015 checklist: 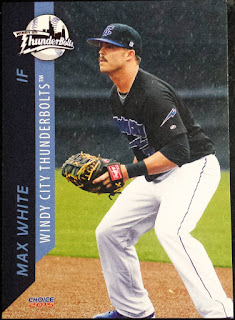 More rain?  I can't recall ever seeing rain on a baseball card before and here we have two cards from consecutive sets, not that I'm complaining though.  I wonder if this shot comes from the same game as the Tingle?

Some other notable names to float through the roster (in years where I didn't acquire the team set, of course) include Dylan Axelrod and Billy Petrick (after his Cubs tenure). 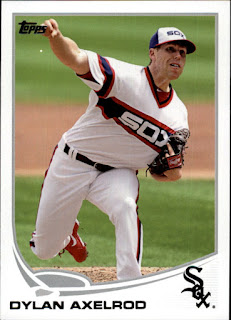 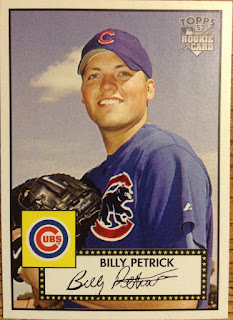 The two most notable Thunderbolt alumni, who I missed out on.


And there you have it, my grand retrospective on the Windy City Thunderbolts team sets.  As far as designs go, I'd have to say my favorite is that 2004 layout that we examined first (it's elegantly simple) and my least favorite is the 2010 set (all floating heads, blech!).

Fingers crossed that Tommy Nance beats the seemingly insurmountable odds and climbs his way all the way to the top of the Cubs chain.  I sure wouldn't mind getting to add another Thunderbolts card to my Cubs collection (the Steve Trout is the only other one).  Plus, it'd be a nice badge of honor for my hometown club.

I'm sure that sense of pride when one of the local kids makes good is much more common in towns with affiliated minor-league teams.  That said, is there any one out there who got to see one of their minor league stars beat the odds and play in the show?  Do tell.

Maybe Nance will create some Thunder of his own in the upcoming season.