A few weeks back, I wrote and ranted about a case of mistaken identity.  The switcheroo was entirely on me, but nevertheless frustrating.  I mean, I thought I was getting an intriguing card which featured a Dead Ball player I needed for my marquee collection - the Cubs All-Time Roster Collection - and instead I sunk most of my monthly hobby budget on an expensive and superfluous minor leaguer who shared a surname.  I mean, no one died, but I think we all know that annoying feeling of self defeat pretty well.  It tends to get stuck in your gaw, so to speak.

Luckily for me, just a few days later I was able to consummate a trade that swapped the accidental acquisition for a super vintage card that was more my speed.  However, that trade is still pending, so it'll be a little while yet before I get to showcase that swap.  In the meantime, I continued to monitor the market for antique baseball cards and I managed to come across another needed card from the same era which fit snugly in what was left of my budget.  Although it wasn't Art Phelan, like I had been originally tracking, it was certifiably, undoubtedly, and undeniably a player who I actually needed for my CATRC binder and not some bush league impostor. 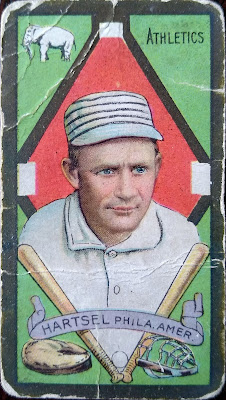 As you can see, this 1911 T205 Piedmont tobacco card has seen better days; of course, it's those very creases, rough corners, and lost paper which put this super vintage beauty into a price range I can afford.  When trying to collect one card of every player for a franchise that's history stretches back to the Grant Administration, one has to try and limit the damage done to the wallet.  All in all, I'd say this piece still ain't too hard on the eyes.  It doesn't hurt that the AL portion of the T205 set is the most ornate and creative looking card design of the era either.

Speaking of standouts, you don't hear much about him now, but Topsy might have been the greatest leadoff hitter of his generation.  The diminutive (5'5") lefty led the American League in walks five times, on base percentage twice, and runs scored once while topping the order for Connie Mack's Athletics throughout the first decade of the 20th century.  The outfielder was also quick, stealing over 240 bases during his 14-year career, including a league-leading 47 in 1902.  All in all, Topsy was everything a manager could possibly want out of their table-setter.

Of course, the Cubs are gonna Cub - Hartsel accomplished all of that after he left the Windy City for the City of Brotherly Love. 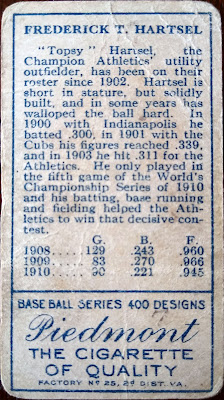 Boy they sure don't write 'em up like they used to... that bio truly does pack a "wallop."  That paragraph also alludes to the fact that Topsy first emerged onto the baseball scene by posting an excellent .339 batting average with the Cubs (or the Orphans, as they were known then) in 1901.  Now, Hartsel had made Big League cameos with the old Louisville club and Cincinnati from 1898 to 1900, but it wasn't until the Chicagoans acquired his contract that he received an extended audition.

In fact, Hartsel's contract was a matter of fiery debate at the time, as both Cincy and Chi-Town had claimed to sign Hartsel from the bushes going into 1900.  Though originally awarded to the Reds, the Cubs eventually won out after team president and soon-to-be owner, James Hart, campaigned to force his rival to forfeit all 18 games in which Topsy appeared that year.  Eventually the NL gave in and awarded his services to the squeaky wheel.


In the end, it quickly became apparent why the two teams were fighting so hard for the then unproven outfielder's services.  To go along with his stout batting average (actually 335 according to BRef), Topsy also swiped 41 bases, smashed 25 doubles and walked 74 times in 1901.  Overall, an excellent season by any measure - truly, the Orphans/Cubs had found themselves a diamond in the rough.

Of course, after his excellent debut campaign, Topsy thanked the organization that gave him his big break by jumping ship and joining the upstart American League for the 1902 season.  Hartsel jumped from the Orphans to Mack's Athletics and the rest was history.  Topsy lead off for four A's pennant winners, including a World Series victory over his former organization in 1910.

Perhaps President Hart should have fought for Topsy when he jumped to the AL as hard as he fought to pry the player back from Cincy?  It's been over 110 years and the Cubs still find themselves in need of a solid leadoff man.  Outside of a few standouts like Dexter Fowler and Bob Dernier, the first spot in the lineup continues to be a blackhole for the organization.  Are we sleeping on the curse of Topsy Hartsel?

That said, the Cubbies didn't end up missing Mr. Hartsel too badly, as the franchise's golden years just so happened to coincide with their former prized prospect's peak years.  I guess this situation worked out for everyone, much like the turn of events that landed me this Hartsel card.  While the initial purchase was a complete dud, I was still able use my mistake in a productive and mutually beneficial trade (again, more on that in a later post) and still uncover a super vintage, tobacco card that I could afford.  Again, everyone wins!