The Monkey's Out of the Bottle

I have a laser-focused collection.

That's not to say that I don't enjoy miscellaneous Cubs cards, fun photography, and mysterious oddball pasteboards.  However, after nearly two decades worth of collecting the way I do, I don't think I'll be shifting my collecting focus anytime soon.  In short, I am set in my ways, I love my Cubs All-Time Roster Collection, and that binder get 99% of my hobby time.

On the bright side, the fact that I am so preoccupied with one mission (collect one card of every man to take the field in a Cubs uniform) keeps me grounded.  I'd much rather spend $20 on a super vintage tobacco card than a blaster of random, modern day product.  On the negative side, it also keeps me grounded.  By that, I mean that I don't get much joy out of buying packs, blasters, and boxes of cards because I know that my collecting needs will almost never be met by such purchases.  After all, I'm not going to find a strip card of some Depression Era benchwarmer in a rack pack of 2020 Topps, am I?  Heck, even if there is a Cubs rookie or first appearance in a North Side uni in a new set, it's infinitely more economical to purchase them secondhand rather than play the Topps lottery.

When the new cards first hit the shelves each year, it should be an exciting event for any hobbyist, but my supremely narrow collecting focus keeps my exuberance mostly in check.  Parade, meet rain. 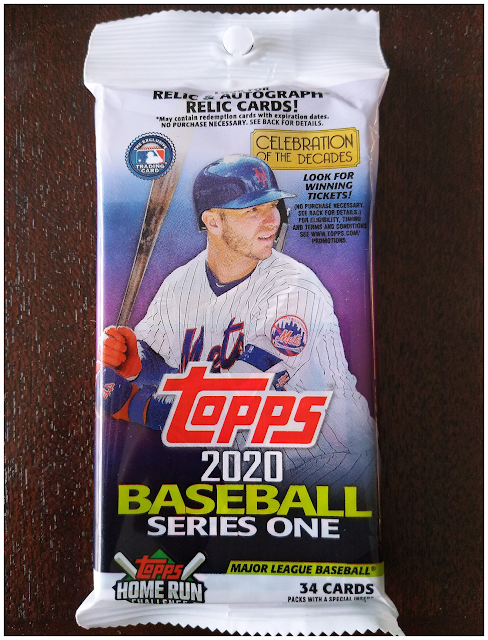 That said, I am not made of stone.  While both my brain and my wallet know that spending money on modern product will not provide much benefit to my CATRC, that doesn't keep me completely on the sidelines.  I'll still buy a stray pack or two each year - I have to see what the new stuff looks like in person, after all.  Therefore, when I found myself in Target over the weekend, I decided to loosen my collar a tad with a rack pack of 2020 Series One.

Now, like I said, modern products rarely have any carrots to dangle in front of my face and this year's Flagship is no exception.  While the checklist is 350 cards long, there is only one, single bullet point which captures my attention, #103 Danny Hultzen - it's like being a Rangers fan or something.  Anyway, despite landing fifteen cards in the set, Hultzen represents the only Cub making his first pasteboard appearance with the team, thus making it a chase card for my CATRC.

Despite this fact, I still plopped down the five dollar bill - despite the long odds of adding anything to my binder - because sometimes you just have to...

Little did I know, I was in for a surprise.  Without any further ado, let's bust into this 34-card pack of 2020 Topps Series One - my very first pack of cards on the calendar year: 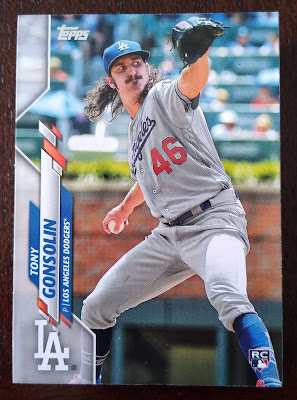 Upon shedding the wrapping, it was Tony Gonsolin's face (or his trendy mustache and flowing mane) which initially greeted me.  I don't know who this guy is. but he's definitely got a good first name. 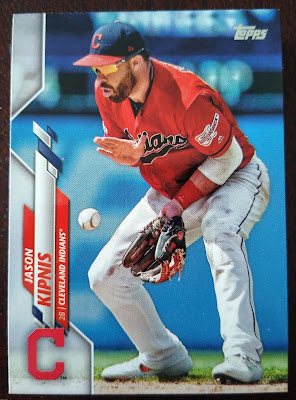 Second out of the packet was a card that could be of potential use.  The Cubs have brought in local hero, Jason Kipnis, on a minor league deal with a Spring Training invitation.  He represents a cheap (an emphatically important quality for the front office this winter), veteran stopgap at second base that could allow blue chip prospect, Nico Hoerner, to spend some time refining his game at AAA.  So, maybe I'll be adding this card to my CATRC binder soon and actually get something useful out of my "treat yo'self" impulse purchase.

Also, maybe the hometown hero can redeem himself for very nearly ruining the Cubs' party in 2016.

I think I lost about 5 years off of the back end of my life when I saw that ball leave the bat.  Yikes.  My skin still crawls when I watch the video 3+ years later.

Speaking of startling moments, the next card in the pack was a massive surprise.  Like I said, there was exactly one card on this fairly large checklist that I actually "needed" for my collection.  One.  One out of 350 possible pulls and I had only bought 34 cards.  Yet, only three cards into my first sampling of the product, there it was staring back at me: 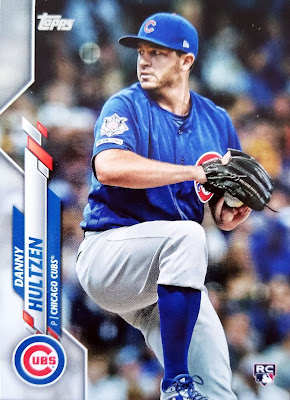 The lefty was one of the few bright spots for the Cubs during the latter half of the 2019 season.  The second overall pick (by Seattle) of the 2011 amateur draft was the only player taken in the first 29 selections who hadn't reached the Bigs. This draft class is widely considered to be the greatest of all-time - for apparent reasons and Hultzen was expected to be one of the bigger names from it.  However, while names like Gerrit Cole, Mookie Betts, Anthony Rendon, Francisco Lindor and Javier Baez went on to stardom, Hultzen battled an onslaught on injuries and washed out of baseball on two separate occasions.  Yet, come last September, there Danny was in a Cubs uniform, striking out the side in his maiden Major League appearance.

Some might question the validity of putting a minor league lifer who had only made six appearances in the preceding season onto the checklist of Topps Series One and - honestly - those people would be right.  It doesn't make sense - it's just a symptom of the over reliance on rookie cards that Night Owl eloquently studied not so long ago.  Plus, while he is back with the club for 2020, the chances of him making much of an impact are quite slim.  The new three batter minimum rule and his lack of a 40-man roster spot see to that.  You'd think Topps would want a proper representation of the Major Leagues in their Flagship set... but rookies.

Of course, with all that being stated, the homer in me is thrilled to find a proper Cubs card of the guy.  After all, LOOGY-type relievers rarely get any love and he looks so much better in Cubbie Blue than Mariners Teal.  Does this make me a hypocrite?  Probably.  Maybe.  Yes. C'est la vie. 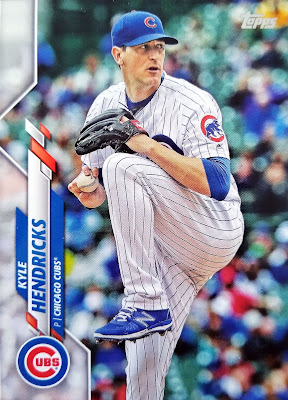 While this pack was already a odds-defying, massive success, I was thrilled to discover another Cubs card just a few flips later.  Since "the Professor" is known for his intelligence and attention to the finer points of pitching, let's now take a moment to examine the design used for 2020 Topps.

In short, I like it.  While, like many who would bemoan this era of collecting, I would prefer a return to borders.  However, that horse is dead, buried and decaying.  Others complain about the sideways orientation of the nameplate and it's seemingly Bowman-inspired layout.  In regards to the former, I also agree, but I find this to be much easier for my brain to comprehend than having the last name printed above the first, like in 2019 Topps; so, at least it's an improvement.  In regards to the latter, some scream Bowman rip-off; but, to me, the layout and design harkens back to video games like MVP Baseball or to graphical elements used in mid-00's television broadcasts, which tickles my nostalgia bone.

Also, I enjoy the color coding used in the nameplate  Any attempt to get more blue and red into my Cubs cards is welcomed. 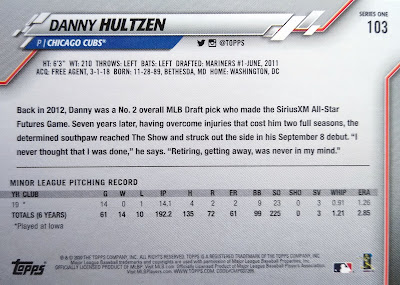 As for the back, they're pretty standard fare, although the heavy reliance on gray is a bit drab.  Also, I find it odd that they included Danny Hultzen's minor league numbers rather than his MLB stat-line.  I'm sure it has something to do with print deadlines or whatever.

Okay, with that out of the way, let's see what the rest of the pack produced: 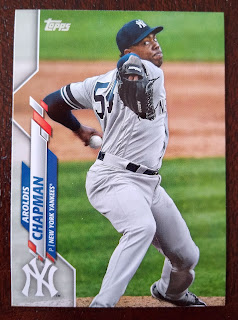 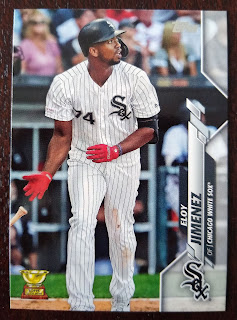 Here we have a pair of former Cubs, or at least a former Cub and a former North Side farmhand.  I don't miss Aroldis Chapman, but this otherwise standout pack had to damped my enthusiasm by reminding me that Eloy Jimenez is blossoming on the other side of town...  Oh well, nothings truly perfect, I suppose.

On the plus side, the latter does represent my first Eloy card whatsoever, so it'll fit in nicely with my "Coulda Been a Cub" side project. 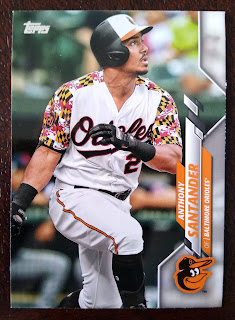 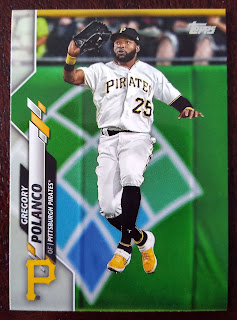 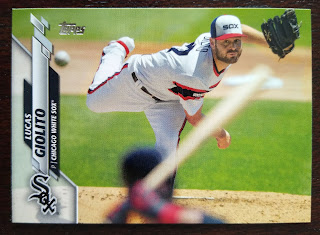 Next up, a trio of cool photos, including a special "Maryland Day" Orioles uniform (anyone else think soccer when they see this?), a hovering Gregory Polanco, and an intimidating perspective not seen nearly enough on baseball cards. 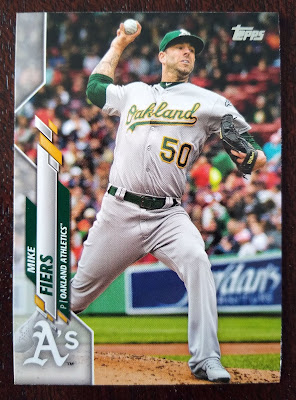 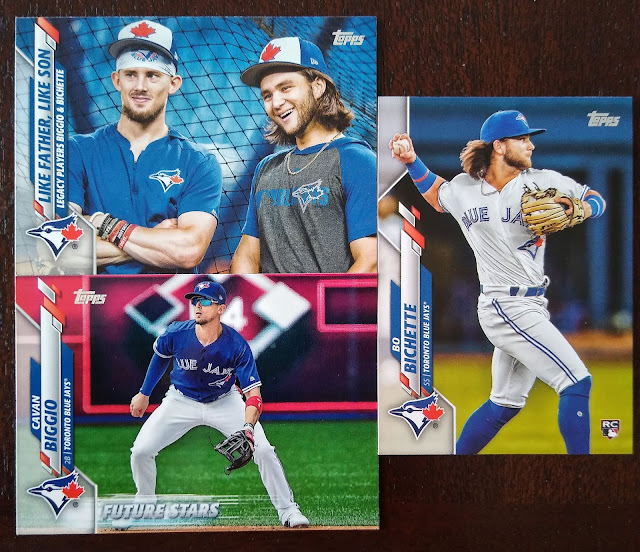 On a brighter note, I think I might have the market cornered on the second generational talent in Toronto.  Well, almost - I'd just need Vlad Jr. to complete that "set."  Still, that's a lot of family ties for one pack.

That does it for the base portion of the packet.  Moving on, let's examine the "special" cards: 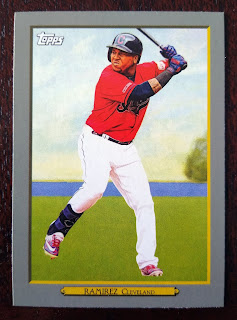 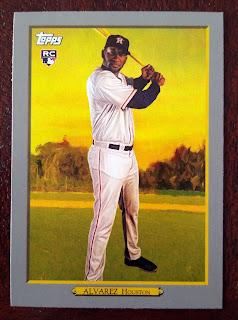 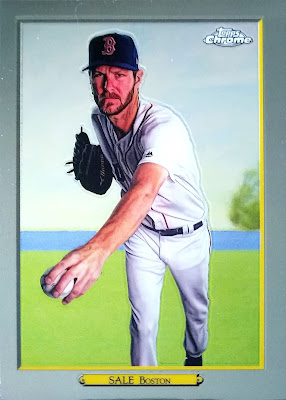 As I mentioned earlier, this particular pack of cards came from a Target, so here are my retail-only Turkey Red inserts - two regular and one Chrome.  Like the return of crimson birds, but a whole lotta meh here with the backgrounds and the players pulled.  Also, I'm just now noticing how poorly these inserts photographed, especially that shiny Sale.  Although, much like Chris' Sawx and Yordan Alvarez's Houston Astros, I probably should have seen that coming. 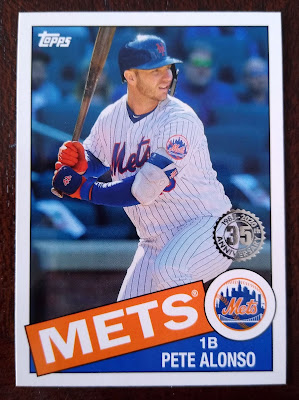 And finally, to close out the pack-busting experience, here's a 35th Anniversary of 1985 Topps insert.  Seems like Topps likes to dip into the well of 80's nostalgia quit often; but, the '85 set is actually one of my favorite designs of all-time, so I'll let it slide this time.  I can't quite put my finger on why I get such a kick out of this set (perhaps it's the simple geometric design, prominent use of team logos, and bold colors), yet I find the originals representing a fair amount of 80's Cubs in my CATRC.

Of course, Pete Alonso is a fully-grown "Polar Bear" and not a "Cub."  Thus, as much as I will cape for '85 Topps, this one will be going into the trade stacks.

With that, we've seen all there is to see with this odd-defying hanger pack.  Within the plastic wrapping, I was able to uncover the one and only card from this product that I declared a target (and, again, within three flips) which served as a Cubgrade for my CATRC, one potential further addition to said binder, a bonus Kyle Hendricks, and an Eloy for my "Coulda Been a Cub" collation.  Considering my narrow scope of cardboard interests, that's an exceptional haul.

All in all, my dip into 2020 Series One went even better than I could have possibly expected and I'm thoroughly satisfied with the brief abandonment of logic that facilitated the purchase.  Granted, there's not a shred of doubt that I could still purchase the single Hultzen RC on Ebay or at my LCS for a fifth of the price I forked over for the pack, though nothing compares to that childlike thrill of pulling it yourself, right?  I'm willing to bet I'm not the only one who feels that way - I encourage you to share a story about the last time you experienced such a rush and/or your feelings about 2020 Topps Series One in the comment section below.

In the meantime, now my wallet and brain have to get together and work twice as hard to repress the urges of my yearning heart to try and replicate the magic.  What have I done?

Email ThisBlogThis!Share to TwitterShare to FacebookShare to Pinterest
Labels: Coulda Been a Cub, Cubgrade, Pack Busting