Last week, my parents took a well deserved vacation to Philadelphia, a trip my wife and I also took this past fall.  They had a lovely time exploring some of the most historic sites in our country - just in time for Independence Day - and scarfing down cheesesteaks.  Every time my mother sent me a picture, I got more and more jealous.

Of course, one of the destinations every tourist must visit when they travel to the City of Brotherly Love is the steps of the Philly Museum of Art.  However, it's not the frescoes and sculptures that lure visitors in - that staircase is the centerpiece in one of the most famous scenes in the history of recorded media.  Rocky Balboa - as played by Sylvester Stallone - concluded a jog across city by sprinting up those marble steps, triumphantly raising his arms to the sky, on the morning of his boxing match with Apollo Creed in 1976's Rocky.  My mother made sure to show me the video of her recreating this bit of "reel" history and I found myself wishing I was right back there myself.

As a runner, you better believe that this site was one of my favorite parts of our own trip last October. 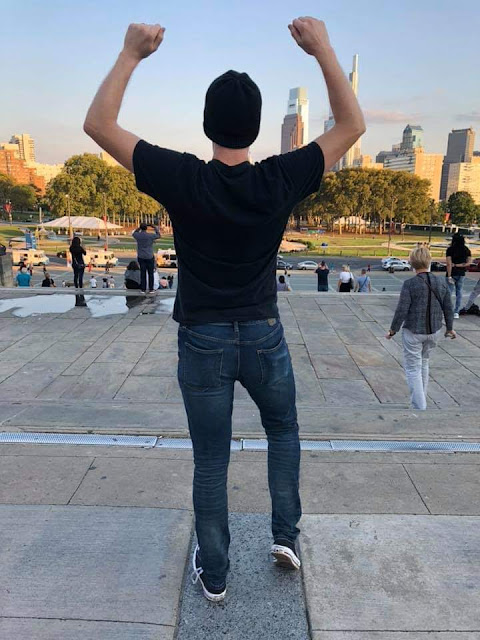 Thankfully; I don't have to be envious of my parents anymore because, as of today, the Cubs are introducing baseball's own "Italian Stallion."  In an effort to shake up what has lately been a frighteningly listless club, Theo Epstein announced, this afternoon, that the North Siders are calling Robel Garcia up from AAA Iowa to make his Big League debut.

But, wait a second... you might be wondering why I would be referring to a player born and raised in the Dominican Republic with a nickname that is evocative of "Bel Paese."  Well, here's the deal, Robel is no ordinary prospect; he did not take the "normal" route in his long and winding climb to the Major Leagues.

You see, Robel was originally signed, as a 17-year old, by the Cleveland Indians in 2010.  Unfortunately, after four uneven seasons with the organization, where he only rose as high a A ball, Garcia was released after spring training in 2014 and no MLB organizations came calling.  With few options at his disposal, the outfielder was forced to expand his horizons... REALLLLLLLY expand his horizons.  In an effort to extend his professional career, Robel took his talents to the Italian Baseball League.  Yup - he had to go all the way to Italy in order to continue on with America's pastime.

Did you even know that Italy has a baseball league?  Sure, you often here about a player turning to a foreign organization in an attempt to revitalize their career, but that's usually in Japan or Mexico, with independent teams in Canada, or through the winter leagues in Australia, Venezuela and Robel's native land of the Dominican.  Italy and, honestly, Europe as a whole, aren't exactly thought of as hotbeds for baseball activity.

As it turns out, the Italian Baseball League is considered the premier diamond organization on the European continent and has existed, in some form or another, since 1948.  While far off the beaten path, Robel Garcia was still able to grow his game in a fertile, competitive environment.

From there, Robel scorched opposing pitchers across the Repubblica Italiana.  While reliable stats are tough to come across (why Baseball Reference doesn't catalog them, I don't know), I did find that Garica posted the second-best (.571) slugging percentage and a third-best (.357) batting average in the league's championship series for Fortitudo Bologna last season, which culminated in a title for his club.

His play was impressive enough that he was elevated to the Italian national team, as well, which played an exhibition game as part of Arizona instructional league play that fall.  The middle infielder surprised a Cubs scout in attendance with his athletic ability and the franchise decided to take a flier on him welcoming him back to affiliated baseball.

Admittedly, his chances of sticking around were slim, at best.  I'm sure the team saw him as potential minor league depth, not as a potential blue chip prospect.  In fact, it was largely due to injuries that he made the bench for the Cubs' AA affiliate, the Tennessee Smokies, coming out of spring camp this past March.  With the window open ever so slightly, Robel proceeded to bust through like the Kool-Aid man.

Since playing his way into the starting lineup, Garica has become a sensation.  In 72 games split between AA and AAA, Robel has mashed 21 homers while posting a .285/.364/.594 slash line from the second base position.  All the while, second base has been a black hole for the Cubs all season, as Daniel Descalso and the piece of human excrement known as Addison Russell have been unable to hit the broadside of a barn.  With Robel continuing to force the issue, it was only a matter of time before he got his chance. 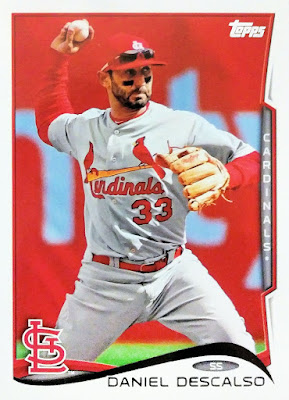 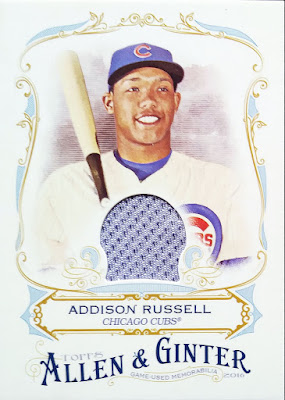 These guys simply ain't cutting it... and one is a terrible person, on top of that.

While the story behind this "Italian Stallion's" unlikely rise to baseball's highest stage is a heartwarming one, a silver lining to what has been a relatively disappointing season at Wrigley Field, it is not one without potential pitfalls.  As impressive as Garcia's power display has been, his swing is still fraught with holes, as exemplified by his 34.2% strikeout rate in Des Moines.  However, at age 26 on a club with a desperate need at the keystone, it's time to sink or swim for this MLB longshot.

For the record, he did strike out in his maiden at-bat during last night's gut-wrenching loss.  Make of that what you will.

Owing to his supremely under the radar status, even during his days with Cleveland,  I definitely do not have baseball cards queued up and ready to be "called up" into my Cubs All-Time Roster Collection.  In fact, despite his pro career having lasted nearly a decade at this point, I can only find three baseball cards to have ever been printed with his likeness.  I guess it should come as no surprise the IBL isn't really on Topps' collective mind. 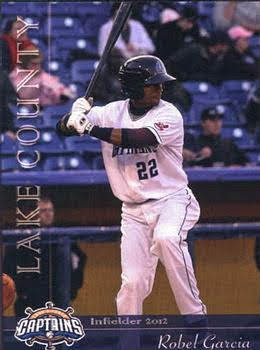 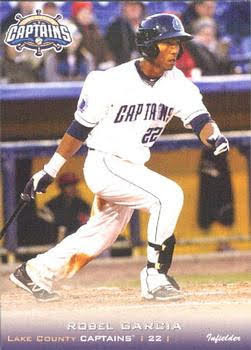 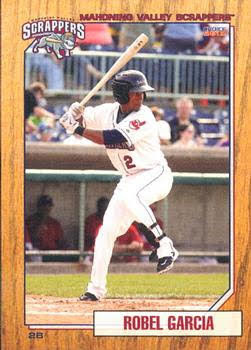 Spoiler alert - all three pasteboards date from his time previously spent stateside and are of the minor league team set variety.  Thus, they aren't exactly the kind of items that pop up in my Chicagoland area card shops.  If any Cleveland super collectors happen to have one of these lying around, I'd love to talk trade!  I am especially fond of that Scrappers single that apes the 1987 edition of Topps.  In the meantime, maybe he'll do something Topps Now worthy and earn himself a true Cubs card - that'd be ideal.

At any rate, I'm thrilled that Robel is getting the chance to prove himself in the limelight after taking such a winding road to get to this point.  Plus, lord knows we Cubs fans could use the uplifting an heartwarming story after the crap the franchise has put us through in the last year or so.  Blown division lead, blink and you miss it playoff exit, pretending not to have any money available to tune up an obviously flawed roster, racist e-mails, inappropriate hand gestures being made by fans towards broadcasters, ownership cozying up to the Trump admin, continually employing an abuser who isn't even good at baseball, uneven and uninspired play... ugh, it's been hard to support this team lately.  Thank goodness for the cookie that is Robel Garcia!

Maybe I need to take a break from Cubs baseball... take a vacation and get out of town or something...  revisit Philadelphia.  Then, I can celebrate the arrival of the new "Italian Stallion" in the shadow of the old one, with a cheesesteak in hand, of course.

At any rate, welcome to Chicago, Robel.  Here's hoping that your power translates to the Big Leagues!