Cleveland Rocks!... My Photography, Not So Much

Here's a post that I've been trying to draft for several weeks now, but haven't been able to close the book; I guess now is as good of a time as any to finally put a period on it.  You see, the problem hasn't been with developing the concept - Kin Kinsley (I Feel Like a Collector Again and Bean's Ballcard Blog) took care of that by providing a surprise trade package.  The problem wasn't with a banging out copy either - the cards were sufficiently awesome and I had/have no lack of proper descriptors with which to convey that awesome fact.  No, the problem was with the photography... but we'll come back to that.


But first, the trade package from Kin: 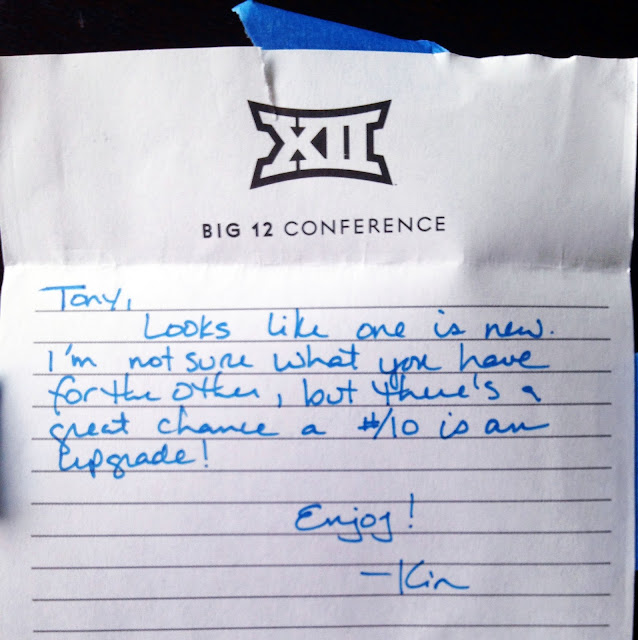 Appropriate that his note should come on Big 12 stationary, seeing as how football season is now in full-swing.  That said, while his paper says gridiron, his cards say ice rink!  According to his notations, this unexpected envelope contains at least one new name for my Blackhawks All-Time Roster Collection and at least one card scantly numbered card... not bad for a gift!  That Kin is one generous fellow, isn't he?

Let's see what goodies he had in store, eh? 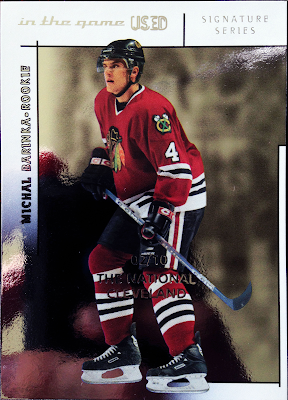 Oooooooooooooh shiny special issues from the 2004 National Sports Collectors Convention (aka The National).  During that edition of our hobby's largest gathering, In The Game promoted their Signature Series hockey product with these special giveaways, which were numbered to ten.  Seeing as I've only been to one national and that was this year's and I've never stopped in birthplace of rock n' roll, these were never even on my radar.  Super cool! 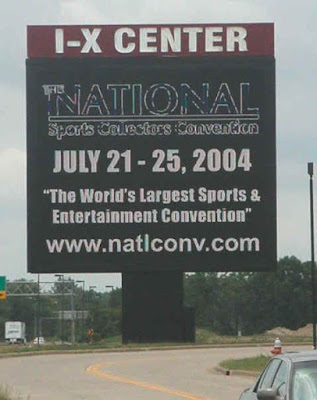 The 2004 National in Cleveland.  Image courtesy of SportsAntiques.com

However, this is where the photography issue comes into play.  If you can't tell, there's a special stamp on the surface (near Michal Barinka's left knee, which indicates the origin of the limited promo.  With the reflective surface of the card already proving to be an issue (say hello to my disembodied hands and phone), silver foil is darn near impossible to read, on top of it.  Seeing as I don't have access to a scanner these days (would that even help though), I struggled with getting appropriate pictures using my IPhone camera for several days.  After trying all sorts of lighting and set-up combinations, this is the best I could do.  I hope you can properly bathe in the awesomeness that Kin forwarded my way!

As for Barinka, Mr. Kinsley was correct in that I already have him in my Hawks collection.  Additionally, he was also right in that his /10 promo is a significant upgrade - into the book it shall go!

Michal Barinka was a defenceman drafted in the second-round of the 2003 NHL entry draft.  The Czech debuted in the following season, but he was not long for the league.  After only 34 games through 2005, Michal was swapped in a three-team deal which netted the Hawks Martin Havlat.  Honestly, this might be the most he ever did for the Blackhawks, as his +/- rating never rose above -5 during his tenure.

It should be noted, however, that though his NHL career was brief, Michal is still active in his native land and he currently skates for Sparta Praha.

Speaking of failed prospects, while I already had Barinka represented in my Blackhawks All-Time Roster binder, this next card featured the new guy that Kin hinted towards: 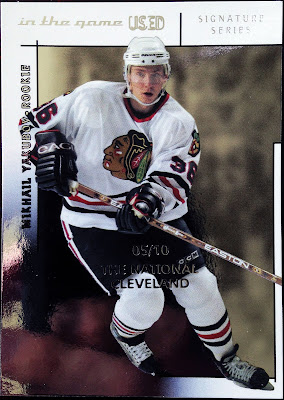 Mikhail Yakubov was a first-round pick of the Chicago Blackhawks in the 2000 NHL entry draft; however, the centre was no Jonathan Toews.  The marquee prospect spent the next three seasons playing in Russia, the WHL, and the AHL, before eventually making his debut in the 2003-2004 campaign. The Blackhawks were in the midst of "dark times" and were the laughing stock on the NHL; as such, there were a lot of  hopes lumped on the young Russian.

Unfortunately, Mikhail was not the boon that was hoped for - over the course of 40 games in the next two seasons, the centre only managed to post 2 goals and 11 total points.  In fact, after a brief and fruitless cameo with the Panthers in 05-05, the book was closed entirely on Yakubov's NHL career.  That said, like Barinka, he went on to have a lengthy and successful career in his native land - his KHL career lasted through 15-16.

It's easy to forget with the franchise's great success in the last decade, but the current Blackhawks dynasty is built on the carcasses of failed prospects from "the dark times."

Though these names hail from one of the worst periods in Chicago sports history, I am extremely thankful to Kin.   A Blackhawk is a Blackhawk, no matter how successful and each player must be honored for their service to Chicago hockey in my Blackhawks All-Time Roster binder.  Plus, to be able to do so with such limited, previously unknown promo cards is an amazing bonus.  Mr. Kinsley, simply put, you rock!

Now, maybe I should go out and try to find myself a scanner, so that I can properly capture how awesome his cards are...