I should never, ever go to Las Vegas.

This past weekend, I learned a little something about myself from my most recent trip to Dave and Busters.  Have you ever played those coin pusher games at a DB, Chuck E. Cheese's, county fair, etc.?  Well, they can be quite addicting in any form; however, when I discovered that the adult arcade had a new spin on the game, which featured trading cards as a reward, I was absolutely hooked.  The new-ish (it's been around since mid-summer) pusher is branded with the ever popular Star Trek franchise and, along with coins, pushes character cards as prizes. 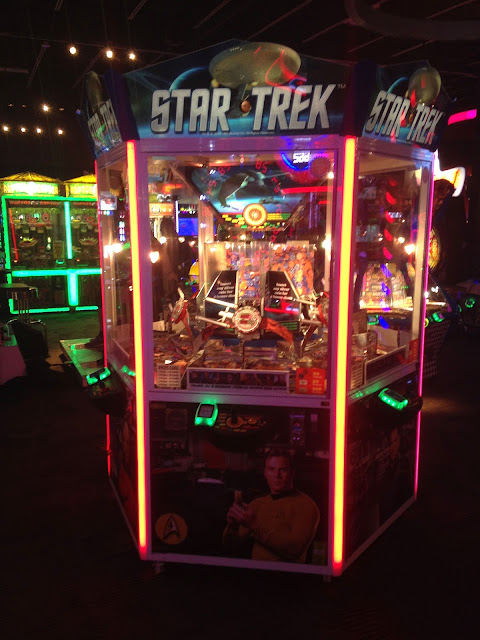 Now, I'm not even a big fan of Star Trek.  I've seen maybe three or four episodes of the original television series, never seen a single movie (including the remakes), nor have I watched a single episode of the follow up series.  Personally, I was always more of a Star Wars guy and I only had room in my heart for one sci-fi universe.  Meanwhile, growing up, my better half was the exact opposite.

The wife is a minor Trekkie, as is a good portion of her family, as well.  So, when we were out celebrating her new job this past weekend, as we moseyed past the Starship Enterprise emblazoned coin pushers, she turned to me and said, "you better win me a Captain Piccard."  Okay then, I'd better "make it so!" 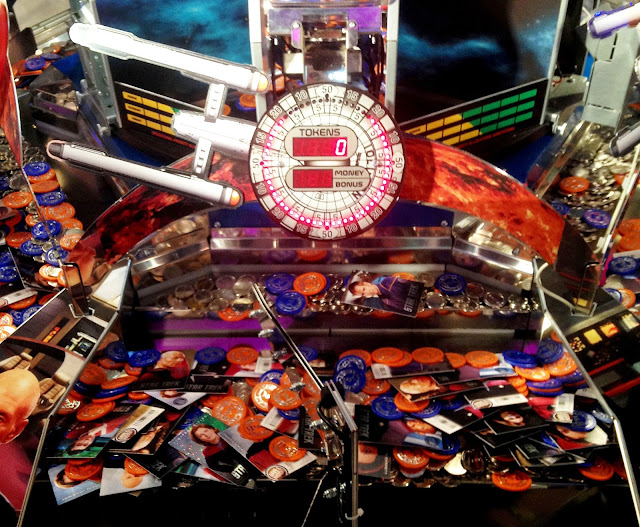 Then, forty-five minutes or so later, I still hadn't pushed a single, darn card down and I'd pumped more money into the machine than I care to admit.  I did get a whole bunch of points/tickets for use in the D&B store though, so there was that.  That said, I think my wife was even getting embarrassed at that point; but, I'll be damned if I'm not leaving there without a Captain Picard on her big night.  Resistance was futile.

Thus, why I should never go to Las Vegas, I'd come back destitute, wearing a barrel like in the old Loony Toons gags.


The image above was taken just as I was about to finally call it a loss and you can see just how tantalizingly close to the edge all of those cards are.  Even after all of that time wasted, I just couldn't help but allow myself one more attempt before I went on to play skee ball... 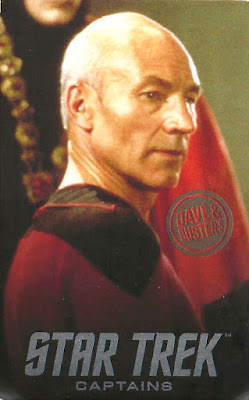 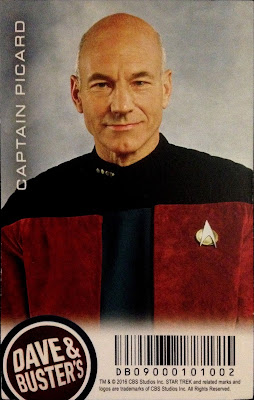 ...and it finally worked out!  On my last attempt, I finally managed to dislodge a card and it just so happened to be the one and only Captain Picard, as expertly played by Sir Patrick Stewart during the Next Generation era.  Hot damn!  In the end, I think I ended up being happier about the triumph than my wife.

The first set of cards featured Trek legends from the 1960's TV series including Kirk, Spock, Scotty, and even the Tribbles.  Sometime, post-October, Next Gen cards were added, but I can't find how many there are in this second series.  Furthermore, each card is also available in a limited, foil-enhanced version, because the parallel scourge just cannot be stopped.

The cards themselves, aren't quite standard size - they're on a thicker than usual card stock (gotta be able to handle the fall, after all) and are about business card-sized.  Additionally, they are apparently redeemable for extra D&B tickets/points, as the bar-code on the back would indicate; however, after fighting with that machine more desperately then Captain Kirk battled the Gorn, I wasn't about to turn the Captain over for such frivolities. 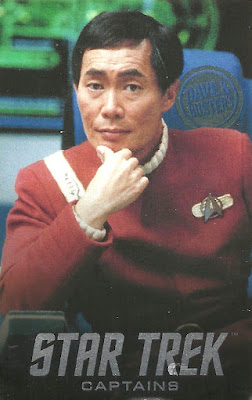 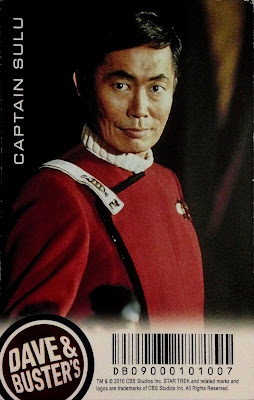 As an added bonus, the Next Generation Captain wasn't the only card that bounced out on that last attempt.  While my wife got her favorite Star Trek character card, I was ecstatic to find that I was able to land mine as well - Sulu.  Again, I don't have much familiarity with the franchise, George Takei happens to be a personal favorite.  His cameos in shows like Psych, the Simpsons and American Dad are always hilarious and he's quite the amusing and outspoken follow on Twitter and Facebook too.

Not to mention, his rise from a Japanese internment camp during WWII and his staunch advocacy for gay rights make him all the more fascinating and a-ok in my book.  Also, I had no idea that Sulu eventually went on to be the captain of the Enterprise.  See?  I really don't know much about Star Trek, at all.

In summation, it took me forty-five minutes and who knows how many swipes to win a pair of trading cards that are probably only worth a quarter a pop - this is why I should probably steer clear of those tempting slot machines in Las Vegas.  Nevertheless, I'm a happy camper with my George Takei oddball card.

Now - can we get a coin pusher with a baseball theme?  Please?