If you ever get super bored, I highly recommend checking out the "Missed Connections" sections of Craigslist.  If you are unfamiliar with the concept behind the forum, it's a place where locals can go and hopefully seek out people that they'd encountered at some point and correct a missed connection.  As noble a concept as it is, there's some extremely bizarre and mildly disturbing entries that will make you wonder why anyone would ever want to meet another human being again:


This past Saturday, I missed some connections of my own - however, they weren't nearly as weird and creepy as those depicted in the video above.  In fact, they were a couple members of our very own blogging community - Dimebox Nick and JediJeff.

The missed connection was definitely my fault as I didn't take the time to check my email or look up a phone number.  I was so laser focused on the deals to be had at the card show we were all attending in the south suburbs of Chicago that I completely spaced and I was quite limited on time.  Sorry guys - I'm a bit of a space case sometimes and, apparently, full of excuses.  Also, I can assure you I won't be posting on Craigslist to assuage these missed connections - let's just try to make next month's collecting affair?

Coincidentally, I had just received a PWE from JediJeff the day before I botched this meet-up; thus, in a way, it still kinda felt like I bumped into the blogosphere's resident White Sox fan and had a chance to swap some cardboard: 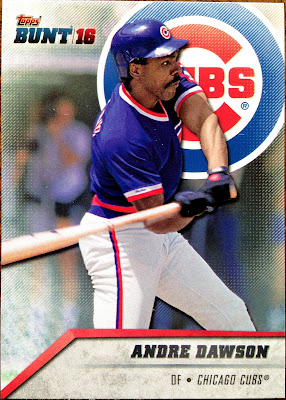 This PWE was actually part of a pre-arranged swap (the other half of which is going in the mail today) centered around the recently freed from the smart phone screen Bunt.  In exchange for the last "Unique Unis" insert that Jeff needed for his throwbacks mini-collection, he agreed to send me the Cubs he had pulled from this product.  After all, I didn't have much luck getting them myself.

I have to say this again, I love this set for it's price point, sleek design and focus on base cards with a few fun inserts.  If we could just expand the checklist (Topps Total levels, anyone?), then this might become one of my favorite releases annually. 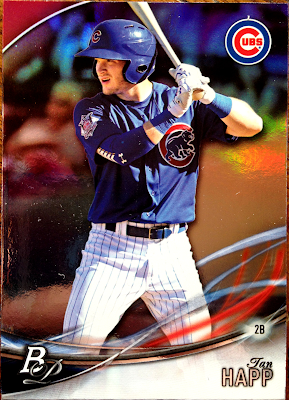 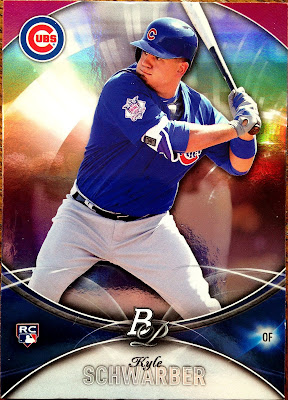 Another fairly new product that I had sampled recently was the rebooted Bowman Platinum line.  Like Bunt, I had no luck in pulling Cubs for myself.  Granted, I only purchased a single pack from a K-Mart; but, I did find a card of the South Side ace sitting within this impulse purchase.  When Jeff caught word of this, he was kind enough to fix my lack of North Side representation with a couple of future stars.

This is only my second card of the 2015 first round selection known as Ian Happ.  The second baseman is rising quickly through the system and may start contributing to the Cubs' middle infield glut of talent sooner rather than later.  Meanwhile, Schwar-bomb has already burst onto to the Major League scene, but lost almost all of this season to injury.  Here's hoping that a fresh start next year really pushes the Cubs offense over the top. 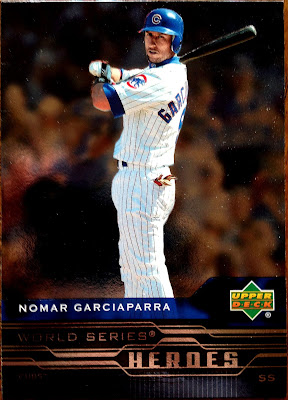 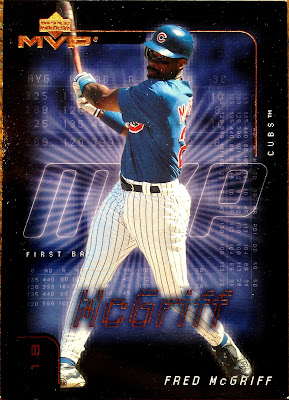 Let's keep the shiny train rolling with a World Series Heroes single of NOMAHH from Upper Deck.  Boy oh boy, did I ever invest my hopes in Garciaparra actually being a World Series Hero for the Cubs... my heart was torn asunder much like Nomar's groin - ouchy.  Still, I love me some shiny objects.

Paired with "backwards Ramon," we have another high-profile, mid-season trade acquisition who was supposed to push the Cubs over the top - "The Crimedog."  McGriff cards using Cubs colors are in short supply at the Wrigley Roster Jenga headquarters, so I will gladly welcome this sharp MVP single into my collection, without hesitation... unlike McGriff himself. 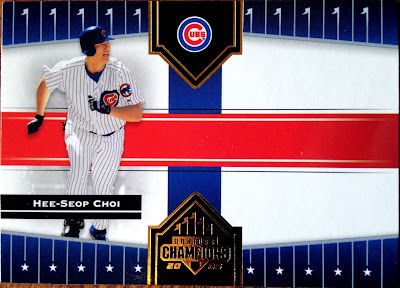 Succeeding McGriff as the Cubs' first baseman was Korean import Hee-Seop Choi, who we see here on Donruss' 2003 version of Champions, a set which was clearly designed for relics and base cards were considered unimportant.  Jeff included a handful of these in his PWE and, despite their unbalanced layout, I love the incorporation of red, white and blue in any Cubs card. 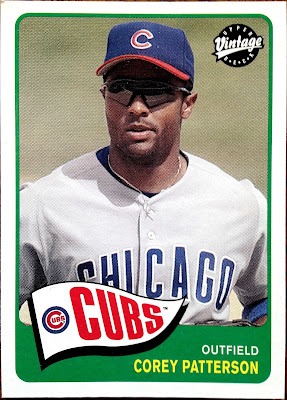 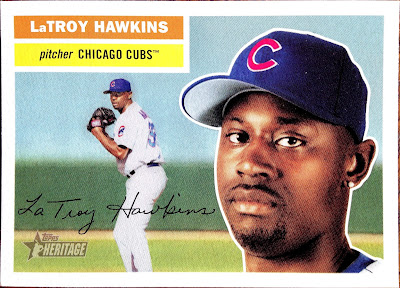 Enough with the digital cards, shiny, foil-lettering and relics - it's time to go back in time a little bit.  Well, not actually, but how about some retro-themed cards that harken back to an era before apps and hits?  Jeff threw in a healthy sampling of throwback products, including a couple of my favorites above. 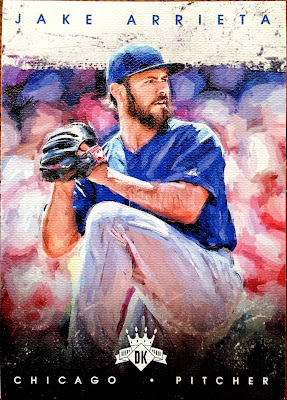 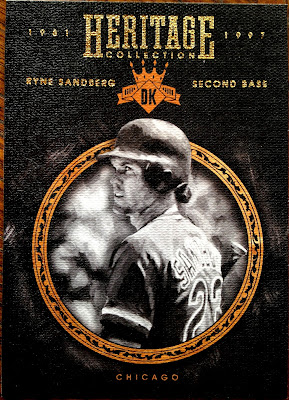 The throwback train continues with these Diamond King examples.  The simulated brush strokes add a certain elegance to the base cards.  If these were fully-licensed with logos, DK would easily be one of the best-looking sets of 2016.  Even so, they might still be able to lay claim to that honor.

Also, major bonus points to Jeff for including my first insert from this set.  Not to mention, a new Ryno is always a plus for any trade package! 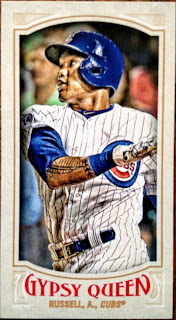 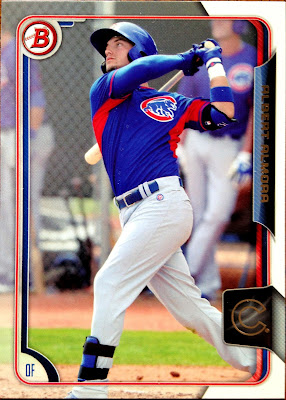 We'll wrap up this trade log with one more old school-style card paired with a single more recent product.  The connection?  Like the Platinum cards shown off earlier, both feature young keys to the Cubs future.

Everybody loves minis, and new cards of the future, perennial Gold Glove-winning shortstop known as Addison Russell are a major draw for me, as well.  Furthermore, Albert Almora might have a Rawlings award in his future too if continues to hit at the Big League level as well as he has in his 2016 trials.  You have to be able to hit to stick in the lineup, after all.

There's some serious leather-flashing ability between these two!

Thank you JediJeff for your excellent PWE - I'll make sure I get your return in the mail this evening.  For what it's worth, I did have it with me at the Orland Park show this Sunday, all prepped and ready to go for you.  Too bad I suck at communicating.

Hey - it could be worse though.  As we've learned from that shady forum on Craigslist, a "missed connection" could be a lot worse...